Some leaders and members of Iraq's PMU are heavily swayed by Iran, which is pressuring Iraq to distance itself from the United States. 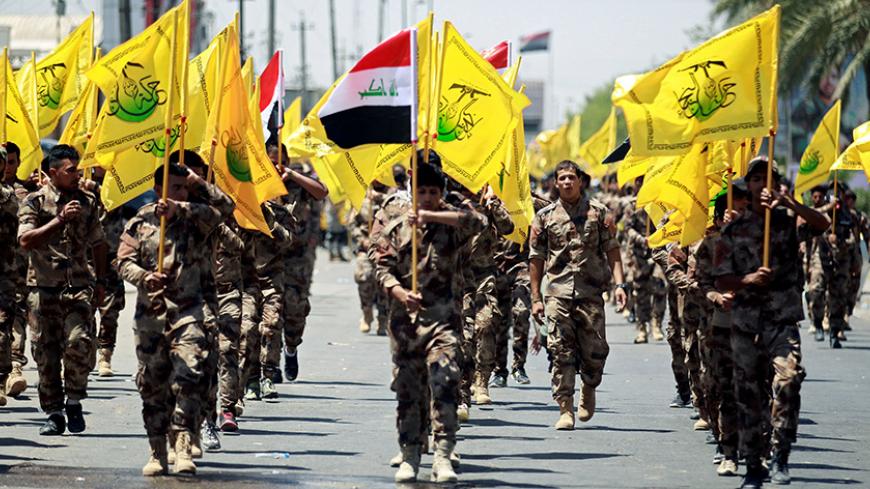 Iranian Supreme Leader Ayatollah Ali Khamenei provided a range of advice during a recent meeting with Iraqi Prime Minister Haider al-Abadi. Khamenei advised Iraqis to be vigilant and not trust the United States, and called for “standing against the involvement of US forces under the pretext of training or other matters.”

In the June 20 meeting, he also warned of the danger of the United States and its allies' waging a campaign against the Popular Mobilization Units (PMU), an Iraqi coalition of mostly Shiite militias backed by Iran, saying the United States seeks to compromise one of Iraq's key power components.

That advice, however, doesn't align with the Iraqi government’s agenda and its wish to pursue and sustain US cooperation, according to Iraqi government spokesman Saad al-Hadithi. The contradiction has affected the relationship between Abadi, who is also commander in chief of the Iraqi armed forces, and senior PMU leaders, some of whom have close ties with Iran and consider themselves an important part of the Iran-led Axis of Resistance alongside the militant group Hezbollah and the Syrian regime.

In a recent dispute between those PMU leaders and Abadi, the latter said June 18 that the PMU has sometimes refused to follow his orders.

Following Abadi’s statements, Hadi al-Amiri, the secretary-general of the Badr Organization, strongly criticized Abadi in a June 26 TV statement, accusing him of having double standards and disrupting PMU operations. Amiri said, "We have grown tired of working with the prime minister. We have to convince and even beg him before we can launch any operation, and I don’t understand why.”

It seems that PMU leaders close to Iran don't back Abadi's non-escalation policy. This is why they don't comply with all of his orders. They openly criticize him, which contradicts military regulations.

In his weekly press conference July 4, Abadi expressed further frustration with some PMU members who are not carrying out his commands. The PMU wants to enter Syria, but according to Abadi, “some of these requests are linked to regional [conflicts] and not Iraq's stance. I want to distance Iraq from regional struggles. … Among the PMU, we have fighters and we have politicians; these requests are coming from the politicians."

Although a law regarding the PMU — signed by Iraq's president in December but not enacted — stresses the link between PMU forces and the commander in chief, the group in reality answers to political leaders, some of whom are Abadi rivals and abide by the Iranian leadership’s orders. For instance, PMU leader Jamal Jafaar Mohammed Ali Ebrahimi, better known by his alias, Abu Mahdi al-Muhandis, shows pride in being a loyal soldier of Qasem Soleimani, the commander of Iran's Quds Force, the special forces unit of the Islamic Revolutionary Guard Corps.

Although PMU leaders close to Iran say they respect Abadi's orders, many of them admit that they follow Iran's Khamenei as a religious leader. This connection to a non-Iraqi religious political leader undermines Iraqi state institutions. The connection's significance is clear when those leaders are inclined to comply with religious orders at the expense of government orders, believing that following their religious leader is a duty. Qais al-Khazali, the secretary-general of Asaib Ahl al-Haq — a PMU military faction funded by Iran — said in a June 8 interview, “When religious law is in contradiction with state law, the former prevails.”

Abadi said that when it comes to religious law, Iraq's top Shiite cleric, Grand Ayatollah Ali al-Sistani, has not told anyone to fight in Syria. Furthermore, the law passed but not enacted by the Iraqi government considers the PMU to be under the control of the commander in chief of the armed forces, which is Abadi.

The ideological and political relationship that some PMU factions maintain with leaders from other countries, and their involvement in Iran-led transnational projects that do not always align with Iraq's state policy, prevent the PMU from becoming a national military force with a purely Iraqi political leadership. That was the intent of the PMU law that has not been enacted.

Nussaibah Younis, an associate fellow at Chatham House and executive director of the Task Force on the Future of Iraq, told Al-Monitor, “The PMU can only become a legitimate part of the Iraqi security forces if their existing command and control structures are dissolved, and if they join existing government security structures as individuals rather than as units. They should be individually interviewed to make sure they are qualified and properly trained, and their past behavior should be vetted to ensure the quality of the Iraqi security forces.”