Saudi Arabia looks to expand its footprint in Iraq

Following decades of setbacks and years of a rift, Saudi Arabia's rapprochement with Iraq and its support for stability there is accelerating, in what is deemed to be a fundamental change in the relations between the two countries. 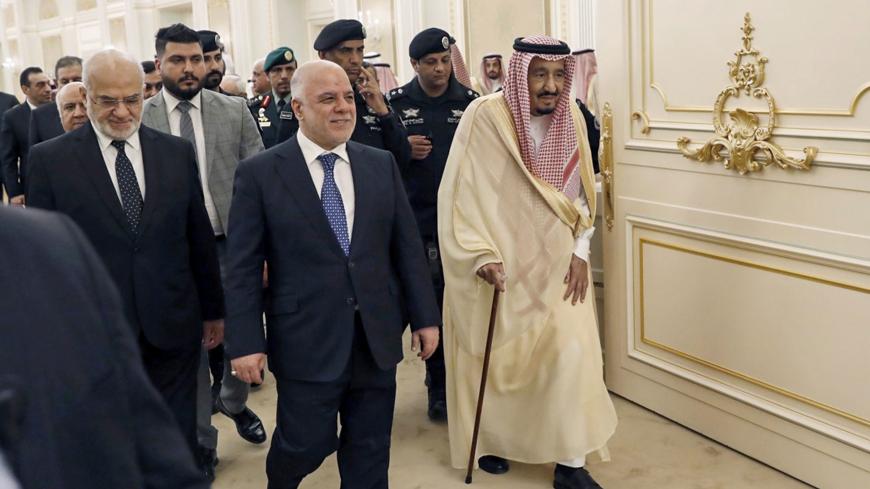 Although neither Riyadh nor Baghdad have officially announced the visit, Dulaimi said in a March 12 tweet that Prince Mohammed will spend two days in Iraq, first meeting with Abadi in Baghdad to "sign agreements," followed by a visit to Najaf to meet religious leaders.

Saudi Arabia was scheduled to reopen its consulate in the oil-rich city of Basra, which is adjacent to Iran, in March, but this was delayed for administrative reasons. Some reports say that Mohammed may open the consulates in Basra and Najaf, the Shiite religious center that is home to top Shiite clerics, during his upcoming visit to Iraq. Meanwhile, the Saudi Embassy in Iraq is in the process of setting up the consulate office at the Sheraton Hotel in Basra. The consulate was closed in 1990 in the wake of the Gulf crisis that erupted during the regime of Saddam Hussein, and remained closed as a result of tensions in Saudi-Iraqi relations.

The Saudi kingdom opened a consulate in Erbil, the capital of the semi-autonomous Kurdistan Region of Iraq, in early 2016.

The decisions to expand Saudi Arabia’s diplomatic representation in Iraq come as part of a broader framework to strengthen the official political relations between the two governments. Saudi Arabia is seeking to establish economic and social bridges between the two countries in various fields.

Abdul Rahman al-Shahri, head of the Saudi delegation responsible for the establishment of the consulate in Basra, said that these measures are carried out to “provide services and incentives to both religious pilgrims and economic delegations between the two countries.”

Abdul Aziz al-Shammari, Saudi ambassador to Iraq, said in a statement in January, “Saudi Arabia is mostly interested in developing relations between the two countries in all areas that serve their aspirations.”

In late February, a friendly soccer game was held between Saudi Arabia and Iraq in the city of Basra, the first between the two countries in three decades. The game was attended by Saudi delegations and a large crowd of Iraqi fans.

The media office of Abadi said in a statement March 5 that the prime minister had received a phone call from Saudi King Salman bin Abdulaziz Al Saud, in which the latter pledged to build a soccer stadium in Baghdad for 100,000 spectators. It was later announced that Saudi Arabia would increase the number of seats to 135,000.

The statement said that “King Salman expressed his readiness and commitment to expand the positive relations between Iraq and Saudi Arabia at the economic, commercial, popular and cultural levels, as well as all levels of interest to both countries.”

Saudi companies, most recently the Saudi Basic Industries Corporation, one of the world's leading petrochemicals companies, have been opening offices in Baghdad and Basra to expand economic exchange between the two countries.

Saudi Arabia is focusing its attention on Basra because it is the richest city in Iraq with the country's largest oil fields and gateway to the Persian Gulf. It is also the most populous city after Baghdad, is adjacent to the Iranian border and home to an overwhelming majority of Shiites who share the same tribal and ethnic origins with Saudi tribes. In addition, many Saudi and Basra families are linked through marriage.

Saudi Arabia is also receiving Shiite figures who are viewed as independent of Iran. These include Sadrist movement leader Muqtada al-Sadr, who visited Saudi Arabia last year and met with King Salman and Prince Mohammed. He was warmly received amid much fanfare.

Saudi news sites, most notably Al-Arabiya, are refraining from criticizing supreme Shiite cleric Ali al-Sistani, because his views are independent from those of Tehran and has broad influence among Iraqi Shiites.

All this has been a matter of concern for Iran, which has allegedly mobilized parties to raise banners in Basra condemning the opening of the Saudi Consulate and the various economic and sporting activities.

The State of Law Coalition led by former Prime Minister Nouri al-Maliki, who is close to Iran, opposes Saudi Arabia's opening of a consulate in Najaf.

Iraq is seemingly determined to pursue rapprochement and cooperation with Saudi Arabia, and is organizing regular visits by political, economic and media delegations. These included Abadi’s visit to Saudi Arabia last October, during which the memorandum of establishment of the Saudi-Iraqi Coordination Council was signed to develop relations between the two countries.

Interior Minister Qasim al-Araji also visited Saudi Arabia last year, and Abadi insisted on receiving Saudi delegations even if they were not high level. In February, for instance, he received the Saudi media delegation that visited Iraq at the invitation of the Iraqi Journalists Union.

In October, Saudi Arabia resumed its flights to Iraq after 27 years, and it opened in October 2017 its border crossing in southern Iraq to expand economic travel and increase tourist and religious travel between the two sides.

The first initiatives to expand relations between the two countries were directly sponsored by the United States with Secretary of State Rex Tillerson attending the meeting of the establishment of the Saudi-Iraqi Coordination Council in Riyadh in October.

The Iraqi-Saudi rapprochement appears to take place in the context of the new US policy that followed the support garnered by President Donald Trump from the US allies in the region to form a united front to counter Iran's rise in the Middle East.

Saudi Arabia has seemingly made great progress in achieving rapprochement with Iraq and expanding its areas of influence within the last year. Such rapprochement is likely to get stronger should Abadi manage to keep his seat for another term in the elections scheduled for May.