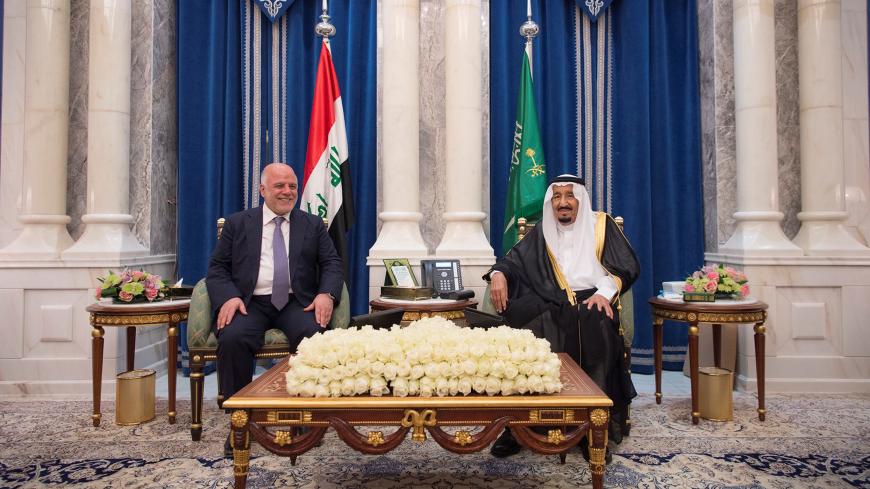 Pictures displaying Iran's Quds Force commander Gen. Qasem Soleimani during the battles with the Islamic State stopped circulating online with the military phase that ended in the liberation of Mosul. The Iranian presence and support for the Iraqi forces were absent in the liberation battles.

Simultaneously, Iraqi officials visited Saudi Arabia and Arab Sunni states that cheer for the Saudi axis. Sadrist leader Muqtada al-Sadr visited the United Arab Emirates (UAE) on Aug. 13-15, with clerics and politicians welcoming him as an Iraqi leader. Prominent Sunni Iraqi cleric Ahmed al-Kubaisi and leading politicians met with Sadr during his visit to the UAE. This was only a few days after his visit at the end of July to Saudi Arabia, where Crown Prince Mohammed bin Salman and other officials had welcomed him.

In the wake of the visit, Saudi Arabia took various measures in favor of Iraq, such as announcing the opening of a Saudi Consulate in Najaf, where Sadr lives. Iraq’s most senior Shiite cleric, Grand Ayatollah Ali al-Sistani, did not object to this proposition, as in the past he had called for openness in relations.

For its part, Iran strongly criticized Sadr’s visit to Saudi Arabia and the UAE. Tasnim website, which is close to Supreme Leader Ayatollah Ali Khamenei, considered the visit a betrayal of the Yemeni people who have been fighting the Saudis for more than a year. Tasnim also accused Saudi Arabia of taking advantage of the Sadrist movement and seeking influence gateways in Iraq.

Sadr’s upcoming visit to Egypt was also announced, in addition to a series of visits by prominent Iraqi officials including the prime minister and the ministers of interior, foreign affairs, oil and transportation to Saudi Arabia. Iran, Saudi Arabia’s regional enemy, did not receive such high-level visits.

Iraqi Prime Minister Haider al-Abadi has been increasingly criticizing the pro-Iran military factions and accused them of violating the law and refusing to obey the Iraqi state. The authorities affiliated with Iran have a bad reputation for being implicated in corruption issues and loss of national public interest in Iraq, especially following the second term of former Iraqi Prime Minister Nouri al-Maliki who has good relations with the Iranian regime and Iran's supreme leader. Adding insult to injury was the departure to Iran of Basra's Gov. Majid al-Nasrawi, after the transparency committee accused him of several corruption offences. This gave the impression that Iran is sheltering those involved in corruption.

Iran is trying to control the situation and preserve its gains in Iraq through its deputies and through bilateral agreements serving its national interests. Iran signed a security agreement with Iraqi Minister of Defense Arfan al-Hayali during his visit July 23. The agreement seemed to have been signed in a rush, which is uncommon in diplomacy; there were no preliminary talks between experts of both countries, thus indicating Iran’s urgency in cementing its military and security role in Iraq as a reaction to the Iraqi rapprochement with the Arab Sunni axis.

The official Iranian agency, IRNA, reported that during his meeting with Secretary of the Supreme National Security Council Ali Shamkhani, Hayali said, “The Iraqi army will fight and will neither allow strife anew nor illegal measures to divide Iraq.”

As a result, relations between Iraqi Kurdistan and Baghdad tensed up because it was understood that Hayali was threatening the Kurdish region with military action in case of a secession referendum.

Hayali denied the statements and blamed IRNA of false reporting.

Saudi Arabia is also trying to offer Iraq aid to outdo Iran and win Iraq over pragmatically, regardless of the sectarian disputes.

On Aug. 15, Iraqi Minister of Oil Jabbar al-Luaibi announced in the wake of his return from Saudi Arabia, “The deputy of the Saudi king emphasized the importance of expediting the activation of the Saudi-Iraqi coordination committee to implement agreements in the fields of oil, energy, industry, minerals, technology, investment, agriculture, trade exchange, banks and joint projects.”

The Saudi Cabinet announced Aug. 14 the formation of the coordination committee to implement what was agreed upon during the visits of Iraqi officials in the past weeks.

Luaibi said, “Saudi Arabia will put in place several health care and humanitarian projects at its own expense. The kingdom will build a hospital in Baghdad and Basra and will allocate fellowships [for Iraqi students] to Saudi universities. It will also open border crossings and establish free trade areas.”

The new Saudi strategy shows soft and positive power in its competition with Iran in Iraq, as opposed to its previous tactics of isolating Iraq politically and denying the new political reality post-2003. Saudi Arabia’s past policies have benefitted Iran to a large extent and allowed the latter to spread its influence on all levels in Iraq.