Iraq and Jordan have signed a security agreement to facilitate trade and travel between the two countries. 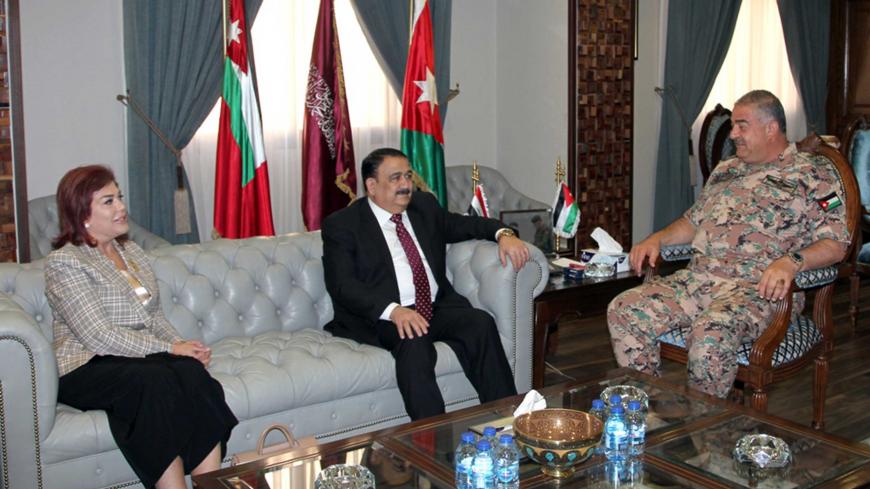 Iraq and Jordan signed a security and military cooperation agreement on Aug. 5 during a meeting in Amman, Jordan, between Iraqi Minister of Defense Arfan al-Hayali and Jordanian Chairman of the Joint Chiefs of Staff Mahmoud Abdul Halim Freihat.

According to a statement on the official website of the Iraqi Ministry of Defense, the agreement aims to “exchange intelligence and expertise in the field of border protection and enhance intelligence capabilities and joint military exercises, as well as technology development, combat terrorism in its different forms, hold joint training sessions and enhance capabilities in the field.”

As per the agreement, trade between the two sides resumed Aug. 8, as the Iraqi Ministry of Transport revealed that the agreement would also restore truck movement between Iraq and Jordan.

According to a ministry press release, “All points of disagreement over operating Trebil border crossing have been resolved, especially after security has been stabilized in the west region [Anbar] and the route has been deemed safe.”

After trade resumed, 563 Jordanian trucks promptly entered Iraq, signaling that things are back in order at the Trebil border crossing, which was a source of concern for Jordan when the Islamic State (IS) controlled Anbar province.

With trucks inbound from Jordan to Iraq, the latter is working on managing security and military patrols to accompany those trucks through risky areas or the areas categorized by Iraqi security as vulnerable to attack.

While military cooperation between Iraq and Jordan is certainly not a new frontier, this new long-term agreement demonstrates how both countries hope to secure their borders against terrorist groups and to return to normalcy in terms of trade and travel between the two countries.

Maj. Gen. Tahsin al-Khafaji, a spokesman for the Iraqi Ministry of Defense, told Al-Monitor that “Iraq focused in this agreement on military training and military cooperation, security and counter-terrorism, as well as … the importance of continuing to hold joint military training exercises between the two countries.”

Khafaji believes this agreement will help secure both countries’ borders, particularly the commercial road. “The agreement focused on securing borders and cooperating in matters of intelligence and information,” he added.

The agreement did not include any provisions on either country’s forces entering the other country for military operations or in pursuit of terrorist groups.

The agreement comes after the two sides held meetings between a number of leading security and military figures. The agreement establishes the grounds for the two countries to form committees on securing borders.

According to a statement from the Iraqi Ministry of Foreign Affairs, the agreement aims to enhance the capabilities of the Iraqi security apparatus with respect to intelligence and information exchange.

Hisham al-Hashimi, a researcher at al-Nahrain Center for Strategic Studies, told Al-Monitor, “This agreement is of great importance to both countries. Jordan plays an integral role in maintaining both countries’ borders, but the ‘mood’ of the Popular Mobilization Units (PMU) might be an issue.”

By the "mood" of the PMU, Hashimi was referring to the presence of affiliates from Hezbollah Brigades, Asaib Ahl al-Haq and al-Nujaba groups just 15 kilometers (9 miles) from the tri-border area between Iraq, Jordan and Syria. Hashimi raised concerns that “those forces might clash with any Jordanian forces that may be present near the Iraqi borders or kilometers into it.”

The economic aspect of this security and military cooperation agreement is not to be ignored, as both countries hope to breathe new life into the Trebil border crossing and rejuvenate trade to 2014 levels by securing routes.

Iraq and Jordan are also working to establish an industrial zone along the countries’ borders, according to Safia al-Suhail, Iraq’s ambassador to Jordan. Safia revealed on Aug. 7 that an Iraqi delegation would soon arrive in Jordan to meet with the Jordanian Ministry of Industry, Trade and Supply to discuss practical steps toward launching a joint industrial zone.

Hasan al-Momani, a former professor of international relations at the University of Jordan, told Al-Monitor that “this security agreement between Jordan and Iraq ushers in a new stage of cooperation between the two countries." This time, the agreement has a "legal framework" that "will help both sides make their cooperation more fruitful."

Iraq’s trade has relied heavily on the Jordanian border, as Jordanian ports serve as entry points for goods destined for Iraq. When the Jordanian border is closed, trucks hauling goods must pass through Saudi Arabia and Kuwait into Basra province in Iraq. Jordanian imports also can be transferred from the Persian Gulf to Iraq, and then onward to Jordan. Iraqi investors are also an indispensable pillar for the Jordanian economy.

Jordanian industries are notably present in the Iraqi market. Still, the sporadic shutdowns of the Iraqi-Jordanian border between 2014 and 2017, when IS controlled Anbar province, negatively impacted trade. In 2015, the shutdowns reduced Jordanian exports to Iraq from $1 billion to $600 million.

In sum, this security agreement between Jordan and Iraq might have to do with economic matters first and foremost. For years, both countries have sought to reopen Trebil border crossing as trade suffered.