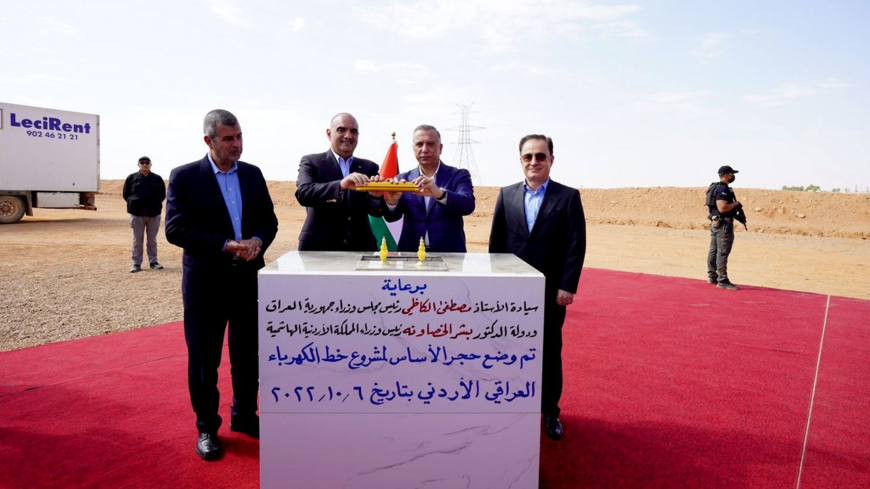 Iraqi Prime Minister Mustafa al-Kadhimi and his Jordanian counterpart Bisher al-Khasawneh met Thursday in the western province of Anbar to launch a groundbreaking project for the electrical grid connection between the two countries.

The length of the power line would be 16 kilometers (10 miles) inside Jordan and 330 kilometers (205 miles) inside Iraq, starting from the Iraqi-Jordanian border of Trebil, passing through al-Rutba area, adjacent to the international road, and ending at Al-Qaim station on the Iraqi border with Syria.

The project is expected to be finalized in mid-2023, providing 150 megawatts (MW) at the first stage and gradually increasing to 500 MW.

Iraq has been working over the last few years on multiple grid connections with its neighbors.

The Iraqi delegation led by Kadhimi signed a grid connection agreement with Saudi Arabia in July during the Jeddah Security and Development Summit. This is in addition to other grid connection project with the Gulf States via Kuwait which Iraq is working to achieve in the future.

Iraq also has a grid connection with Turkey, importing 150 MW, and it imports 1,200 MW from Iran.

Iraq's ultimate goal is to become a transit hub for electricity in the region, in addition to fulfilling the country's need for electricity, which is about 27,000 MW daily, while it is producing only 22,000 MW at the moment.

During the launching ceremony, Kadhimi stressed, “The project would secure the path of energy exchange between Iraq and Jordan, which is a true reflection of the policy of openness and cooperation adopted by this government.”

In 2021, Iraq hosted a regional conference in Baghdad, aiming to enhance the cooperation and partnership with its neighbors. Grid connection was one of the main points on the conference agenda.

The second round of talks is expected to be held in Jordan soon, with the participation of Iraq and other regional countries, in addition to France that played a crucial role in the conference in 2021.

During another regional summit in Baghdad last year, Iraq and Jordan also had agreed to expand the electrical grid connection with Egypt in the future.

On the sidelines of the groundbreaking ceremony, the two sides held a bilateral meeting during which they discussed ways to develop bilateral relations and regional cooperation.

The meeting included a discussion of the implementation of the agreements concluded between the two countries in the fields of agriculture, transport and food security, in financial and banking relations, and the development of its infrastructure.

Expanding trade and economic ties with Jordan is a long-term policy adopted by the previous government and something the Kadhimi government has continued with.

Former Prime Minister Adel Abdul Mahdi signed an agreement in 2019 to sell oil to Jordan at a discount. Iraq and Jordan also have been looking to build a pipeline from Basra to Aqaba. In addition to that, the two countries are working on building a joint industrial and trading city on their border.

The grid connection would provide more support to the joint industrial and trading city as well.