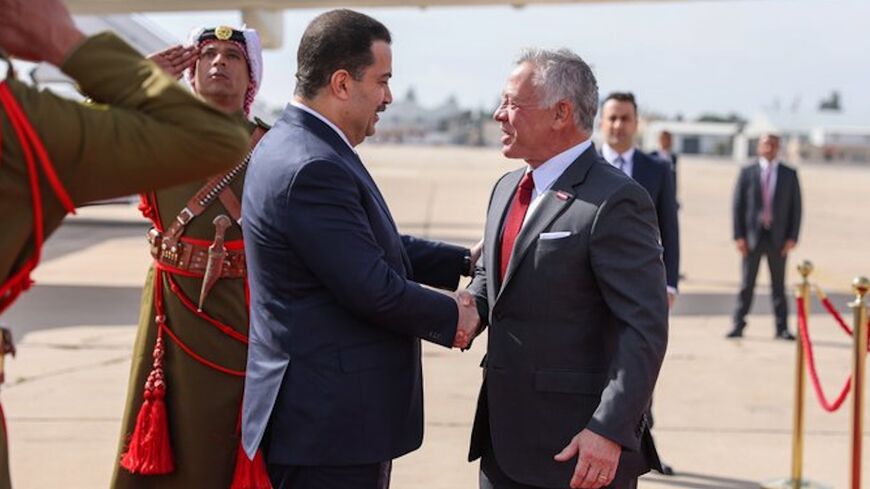 In the presence of Crown Prince Hussein of Jordan and Jordanian Prime Minister Bisher al-Khasawneh, the two sides discussed in a meeting bilateral relations and stressed the need to continue coordination and consultation between Iraq and Jordan on various issues of mutual concern.

They also discussed mutual cooperation in accordance with the agreements and memoranda of understanding signed by the two countries previously.

This means that one of the main goals of the trip was delivering the message that the new government will not cancel the agreements signed between the two countries during the former government and not even stand against the implementation of the agreements.

In early November, the Cabinet voted under Sudani's direction to cancel all decrees issued by the caretaker government beginning Oct. 8, 2021.

This raised concerns that some of the agreements made between Iraq and Jordan during the former government would be affected.

Among other projects, former Iraqi Prime Minister Mustafa al-Kadhimi and Khasawneh launched a groundbreaking project for an electrical grid connection between the two countries last October in the western province of Anbar.

Iraq and Jordan also have multiple agreements on an oil pipeline project from Iraq’s Basra to Jordan’s Aqaba. There has been talk about extending the project to Egypt through the Red Sea as well.

The project, however, faces several obstacles and political objections, especially from Shiite groups close to Iran, as the project was seen as a move toward Iran's rivals in the region.

In Iraq's latest elections, Sudani was a candidate of the Coordination Framework, which consists mostly of Iran-backed groups and militias.

Sudani’s first trip to Jordan in such an environment is meaningful, especially concerning the emphasis on continuing with the agreements and memoranda of understanding between the two countries and “strengthening joint work in accordance with memoranda of understanding signed by the two countries,” according to the Iraqi Prime Minister Media Office.

However, it is not known yet whether this is more of a formal trip for general discussions or whether there will be follow-up efforts to implement the common projects between the two countries — more importantly, the two main projects of the pipeline and the grid connection.