Khamenei urges Iraqi PM to stand up to common 'enemies' 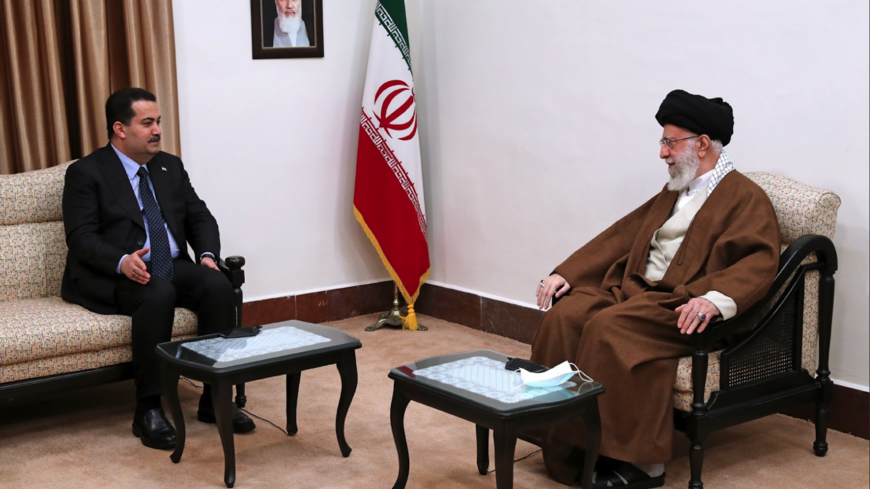 Khamenei urged the Iraqi premier to stand up to what he deemed “enemies” of Iraq. “You have to stand firmly against the enemy’s will by relying on the motivated and young people,” he said.

Immediately after the meeting, Khamenei tweeted: "We congratulate Mr. Shia al-Sudani on his being elected as Iraq’s Prime Minister. He is a devoted, competent person whose appointment as head of the Iraqi government is a source of pride."

Former prime minister Mustafa al-Kadhimi, who was in a close relationship with the United States and Western and Arab countries, was not received by Khamenei in his last two trips to Iran.

The visit is Sudani’s third foreign trip since he became prime minister on Oct. 27, following visits to Jordan and Kuwait earlier this month.

During the meeting, Sudani asked Raisi to expand gas imports to enable Iraq to meet its electricity demands.

The previous government was working hard to diversify electricity production through expanding electricity grid connections with Saudi Arabia, other Gulf nations and Jordan, in addition to setting up solar power farms.

It is not clear yet if the new government will continue with this policy or will seek more reliance on Iranian gas and electricity, as Sudani requested from Raisi today.

Sudani and Raisi agreed to establish a committee for expanding economic relations between the two countries, headed jointly by Sudani and Iranian Vice President Muhammad Mokhber.

Sudani also promised Raisi that Baghdad would work on paying Iraq’s debt to Iran. Iraq currently holds about $5 billion in Iranian funds — meant for gas and electricity payments — in Iraqi banks. The money cannot be transferred to Tehran due to the sanctions.

Sudani emphasized the necessity of security coordination between the two countries.

Iran has been bombing Iraq’s Kurdistan region for months, which they argue is aimed at stopping alleged activities from the Iranian Kurdish opposition based in Iraq Kurdistan.

Iran recently warned Iraq that it will undertake a ground operation in Iraq Kurdistan if Iraq does not disarm those groups and expel them from near the Iraq-Iran border.

Khamenei also tweeted today after the meeting with Sudani: "Mr. Sudani, you said that based on your Constitution you wouldn’t let any group use Iraqi soil to harm Iran’s security. But attempts are being made to harm Iran’s security in some Iraqi regions. The only solution is for Iraq’s central govt. to exert its authority in those areas."

Over the past week, Iraq’s National Security Council decided to deploy Iraqi forces on the border between the two countries to stop any alleged activities by Kurdish groups against Iran.