When conflict arises, these Iraqis go to the madeef

Madeefs have become a popular alternative to the traditional legal system in Iraq, with Iraqis seeking the assistance of tribes to settle disputes and conflicts. 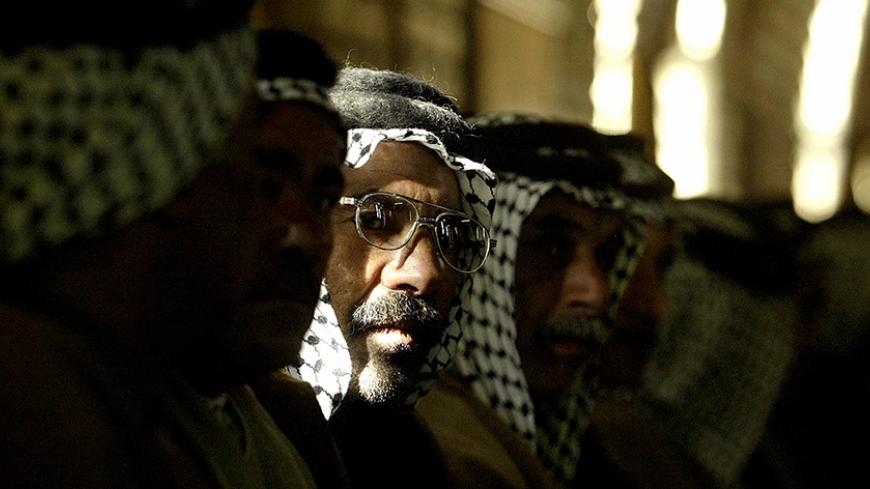 Iraqi tribal sheikhs attend a ceremony in the town of As Sulayiya near the holy city of Najaf, Jan. 25, 2005. - REUTERS/Marwan Naamani

BABIL, Iraq — “Madeef” is an Arabic word used when referring to a place dedicated to receiving guests. In Iraq, this word has a specific social meaning; it is a place where tribe members, leaders and sheikhs meet, socialize and resolve disputes between each other or with other tribes.

Madeefs are popular in Iraq, where people now prefer to solve their problems with the assistance of tribes, instead of going to the police and having to deal with courts.

The civil scene in Iraq has changed amid the weakening of the state, and madeefs play an important role in especially central and southern Iraq.

Al-Monitor met with Mohammed al-Khafaji, a sheep merchant from Babil who resorted to a madeef to settle a dispute over a business deal with another merchant. A tribal madeef session, held in August, resulted in him retrieving $4,000. Khafaji said, “Years of struggle in courts and with the police failed to solve this financial dispute, so I had to resort to the tribe.”

Such cases are now common in Iraq, where madeefs have turned into places where murder, assault, theft and armed conflicts, among other disputes, are settled.

Resorting to tribes in settling disputes instead of state institutions was justified by Sheikh Majid al-Kallabi, from Babil, who told Al-Monitor, “The tribal madeef often solves problems in one session. It has therefore become the alternative to solving disputes to many state institutions that require a long time to settle issues. Madeefs have turned into places where political, social and economic issues are discussed, and religious ceremonies and funerals are held.”

During Ashoura on Oct. 24, Sheikh Ali al-Yasiri held a memorial service at his madeef, a large hall that contains traditional Arab furniture and a fireplace in the middle for the preparation of coffee for guests, located in Babil province.

While Yasiri built his modern madeef using bricks, madeefs in the countryside — which receive dozens of visitors a day — are built from reed or palm fronds and have high ceilings. Some are located in large tents.

The shape and materials adopted in building madeefs in the central and southern regions of Iraq date back to the Sumerian era. The buildings dating back to this time period are large and are made out of reeds and papyrus.

In al-Shamiya city in Diwaniyah province, 193 kilometers (120 miles) south of Baghdad, Al-Monitor visited Sheikh Mohammed al-Fatlah’s madeef, which is made out of reeds, papyrus and palm trunks and furnished with handmade carpets. Dozens of tribal members were present while a worker offered coffee to the guests.

Saad al-Fatlah, a tribal member who works as a rice farmer, told Al-Monitor, “Madeefs have gained importance since the [end of] the Baath regime, which fought the tribes from the beginning of its rule in 1968 in a bid to strengthen the state’s control.”

He said, “But after 2003, following the fall of Saddam Hussein, the weakness of the state and the absence of security, tribal influence grew stronger as madeefs popped up in Iraqi cities as well as the capital Baghdad.”

However, Fatlah said, “Modern technical means have deprived madeefs of a great deal of their historical character as the managers of [madeefs] abandoned traditional means used there, such as the traditional way of preparing coffee and [furnishing the space with] handmade carpets. These were replaced by modern products, which deprived them [madeefs] of their simplicity and hospitable nature that characterized them.”

Mohamed Hassan, a madeef constructor from al-Shamiya, told Al-Monitor about the construction materials that are used in building madeefs. “Reeds and papyrus plants that grow in lakes and on river shores are dried and the sticks are made into bundles that serve as pillars for the madeef.”

He said, “Reeds are characterized by being flexible and they can be bent once fixed on the ground. They take on a curved shape that can handle the weight of the ceiling, which consists of palm fronds and papyrus. These materials are characterized by their thermal insulation and resilience to various weather conditions.”

Hassan added, “The materials used for the construction of madeefs are natural, easily obtained from the surrounding environment and cheap.”

He pointed out that the madeef construction involves all tribal members, particularly young people, on a voluntary and unpaid basis.

Al-Monitor met with Sabah Shaker, head sheikh of the Ghourra tribe and professor at the University of Mustansiriyah. Shaker talked about the political role of madeefs, which he described as established. “The madeefs were the starting point of the people's revolution against English colonialism,” he said.

But Shaker said he was against “having the madeefs and tribes replace the state in regulating societal affairs.”

He explained, “In some cases, madeefs go beyond the law, and this is wrong. For instance, if a patient dies in the hospital, doctors are threatened by clans based on a decision emanating from the madeef.”

There are several examples that confirm the key role madeefs play in solving contentious issues. In 2013, the madeef of Sheikh Jabir Huwaish al-Kubaisi settled tribal disputes between the southern Shiite tribes and the Anbar and Kabissat Sunni tribes.

On Aug. 9, 2014, Basra Gov. Majid al-Nasrawi visited the Bani Malik tribe madeef in the district of Qurna to settle a dispute among the sons of this clan.

A tribal settlement reached in a madeef in June 2015 consisted of granting 51 women from a tribe in Basra to another tribe in a bid to put an end to a bloody conflict.

Also, an announcement made on Jan. 13, 2014, by tribal sheikhs and dignitaries who met in the madeef of Sheikh Ali Hatem al-Suleiman and called on the government to withdraw its military forces from the cities, confirmed that madeefs have turned into political platforms.

Due to the role madeefs now play, the Islamic State seized in May 2015 the madeef of tribal Sheikh Albu Alwan.

The growing role of madeefs in solving disputes in Iraqi society is the result of the weakness of the state, and there are people according to whom such a role is useful. Member of the tribal commission in the Iraqi parliament MP Mohammed Chihod told Al-Monitor that madeefs serve as “a way for citizens to preserve the positive habits and traditions of their ancestors. These include courage, generosity, pride and patriotism.”