Iraqis look to get ahead on keffiyeh fashion

The headdress worn by Iraqi men has become the embodiment of Arab prestige and a status symbol worn not only by ordinary citizens, but also by politicians and dignitaries who use it to profess their political and social standing. 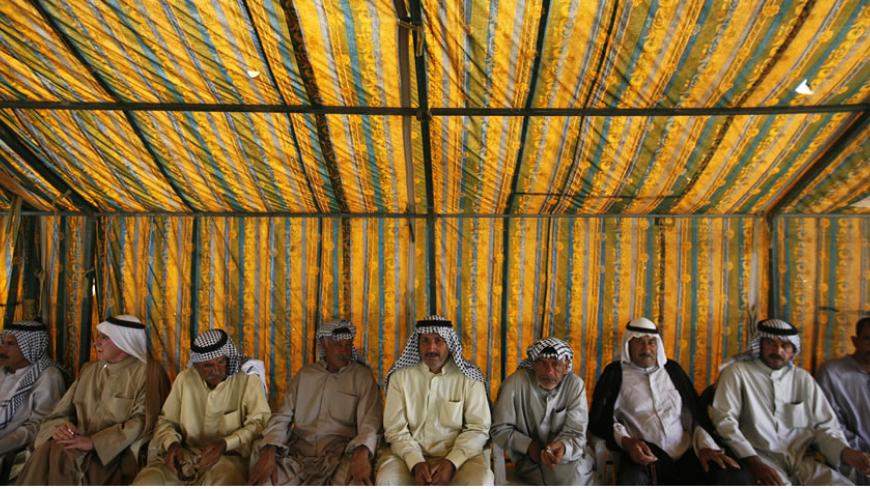 Elderly Iraqis sit in a tent during a meeting of local tribe leaders with US soldiers from the Second Stryker Cavalry Regiment and Iraqi security forces near Muqtadiyah in Diyala province, July 25, 2008. - REUTERS/Damir Sagolj

BABIL, Iraq — It is common to see Iraqi men, even the young, these days wearing the traditional Iraqi tribal headdress. Instead of Western clothes, many men opt to wear traditional garb that includes a keffiyeh (cloth headdress) and “agal” (cord wrapped around a keffiyeh). Sheikh Majid al-Kalabi, an elder of the Banu Kalb tribe, told Al-Monitor that this trend has emerged due to “the dominant role of tribes in Iraqi society, which has grown to rival that of the state in resolving disputes, organizing social events and influencing local government decisions.”

Kalabi said, “Wearing the headdress no longer is confined to those in the countryside and to desert tribes as it was in the 1950s and 1960s. It has become a trend that has widely spread to the cities, where in the past only a small proportion of people wore it. Iraqi tribes have distinctive headdress styles, and the leader of a tribe often wears a special agal whenever he appears in public.”

Because of the increasing demand of the traditional headdress, the manufacturing business is flourishing in Iraqi cities. Hamza Kitab, a Babil-based producer and merchant of this popular headdress — who has been practicing his trade for many decades — told Al-Monitor, “The agal is handmade from woven goat wool blended with cotton and silk using traditional spindles that spin the dark black thread into a cohesive cord with a desired thickness of 5 centimeters [2 inches]. A machine is then used to shape the agal into a 110-centimeter [43-inch] band with a wooden hammer that fixes any imperfections in the roundness of the cord. At the end of the process, the woven and packed band is placed in a mold that gives the agal its desired shape, followed by a thorough cleaning with a special brush and the reorientation of the flow of the fibers with a comb.”

But like other traditional folkloric industries, this trade faces competition from agals imported from abroad, particularly from China. Kitab said, “Though Iraqis prefer the handmade agal, imported products compete due to their attractive pricing. In cities, imported bands are preferred to quality authentic agals due to the high cost of the latter that tops the $50 range, as opposed to only $5 for the imported ones that are usually made from synthetic and not natural fibers.”

In an interview with Al-Monitor, merchant Karim al-Yassiri, who has been practicing this decades-old trade in Najaf, said, “Some community leaders, tribal elders and dignitaries wear agals made of pure silk — with some models even inlaid with gold or silver thread.”

In explaining the headdress-wearing phenomenon, Babil-based social researcher Ali al-Haidari told Al-Monitor, “Donning the agal has spread in recent years even among the young, particularly during holidays and events such as weddings and funerals, because men desire to be seen in garb that denotes their status and upholds the traditions of their fathers and grandfathers.” Haidari said the importance of the headdress had transcended its utilitarian function. “It is a symbol of reverence and dignity. In the event of disputes, touching or dislodging it by an opponent is considered to be a great insult that could lead to a tribal quarrel only settled by the payment of monetary compensation and the apology of the offender,” he said.

The role of the headdress as a status symbol and as a distinguishing feature that characterizes Arab men has prompted researchers to investigate its historical origins and subsequent widespread use. While some attribute it to desert life, where Arabs tied their camels with ropes that they often carried on their heads, other studies indicate that its origin is not Arab but emanated from the Sumerian culture, as evidenced by ancient statues that depict men wearing the agal and keffiyeh.

Politicians have caught on to the status the headdress now has in society and the reverence that it imbues upon its wearer. For instance, late Iraqi President Saddam Hussein wore the agal and keffiyeh on different occasions, most notably during the grand celebration in Baghdad held to commemorate the end of the Iraq-Iran War in 1988.

Prior to Saddam, the headdress was worn by King Faisal I (1883-1933). More recently, photos published by the Iraqi media show Iranian Gen. Qasem Soleimani, the commander of the Islamic Revolutionary Guard Corps' Quds Force, wearing the Arab headdress during one of his visits to the battle front against the Islamic State in Salahuddin governorate in March 2015. In addition, the headdress has infiltrated the halls of parliament, with a number of legislators donning it, such as member of parliament and tribal elder Mohammed al-Sahyoud.

Sahyoud told Al-Monitor, “Folkloric traditional dress competes with Western garb that also is widespread in Iraqi society. However, the former has failed to be widely adopted in state institutions and government agencies, as is the case in Arab Gulf countries where the headdress is an official uniform — even worn in parliament and by heads of state.” He expects “the agal to become an official style of dress worn in various government institutions, because it represents the Iraqi identity.”

Their distinctive headdress has characterized Arabs among other peoples of the world. As such, they must preserve its use in the face of modernity and competing Western styles of dress, particularly considering that its use has not yet become extinct but remains part of current cultural traditions.