The keffiyeh has long been a symbol of Palestinian nationalism, and the largest keffiyeh in history is set to break a record next year. 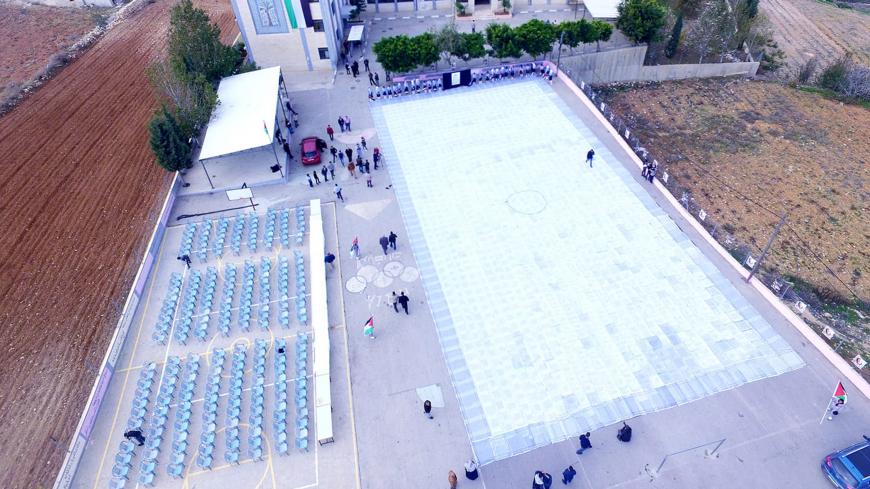 RAMALLAH, West Bank — Palestinians have long sported the checkered black-and-white keffiyeh with pride as a symbol of Palestinian nationalism. This emblem of heritage and rebellion, also used by other countries in the region — from Iraq to Turkey — has inspired poems, songs, political slogans, cartoons and even high fashion. Finally, the Hebron governorate decided to ensure its place in the Guinness World Records 2019 by creating the largest keffiyeh ever.

Next year, the governorate will mobilize both public and private institutions to create a 5,000-square-meter (53,820-square-feet) keffiyeh at its Dura International Stadium, in the presence of a delegation from the Guinness World Records on Nov. 16, National Keffiyeh Day.

The first rehearsal to this end was realized this year in Hebron governorate by exhibiting the largest Palestinian keffiyeh of 1,400 square meters (15,070 square feet) at the Yasser Arafat School for Boys in the town of Dura, 11 kilometers (7 miles) southwest of Hebron city, with the participation of several students from nearby schools, on the occasion of Independence and Loyalty Week and National Keffiyeh Day.

This event, which was organized by the Directorate of Education in southern Hebron, was a first step to weave the largest keffiyeh in the world, which at 5,000 square meters would be nearly three times as large as the one displayed at the school last month, and set a mark recognized by the Guinness World Records.

Khaled Abu Sharar, director of the Southern Hebron Education Directorate, told Al-Monitor that they wanted to avoid organizational errors while creating the world's largest keffiyeh next year. “In 2019 we will present our people with an event worthy of the keffiyeh symbol by exhibiting the [world’s largest keffiyeh] at the Dura International Stadium,” he said.

The large keffiyeh was scheduled to be woven this year, but the project's organizers decided to postpone it until next year. “We have been in touch with Guinness World Records since last March, but due to the magnitude of the project and in order to avoid failing, we decided to wait until next year so all procedures can be arranged properly. This mini-experiment aimed at allowing us to identify any organizational and technical mistakes so we can correct them,” Abu Sharar said.

While the Directorate of Education in southern Hebron came up with the idea and will implement and coordinate the execution, various local civil society institutions will also get involved. The giant keffiyeh is to be the joint product of the Hebron governorate, the municipality and local businessmen and institutions, which will collaborate on the financial, technical and logistical tasks involved.

The students at the Yasser Arafat School for Boys, along with students from nearby schools, worked for weeks to sew together 1,800 small keffiyehs to create the one that was displayed last month.

In 2015, the Ministry of Education decided that Nov. 16 would be National Keffiyeh Day as part of Independence and Loyalty Week, which coincides with both the commemoration of the passing of former President Yasser Arafat on Nov. 11 and the anniversary of Independence Day on Nov. 15.

Schools and educational institutions in the West Bank and Gaza Strip celebrate this occasion each year, when students and teachers wear keffiyehs.

He noted that the 5,000-square-meter keffiyeh would be more carefully woven together than the one that was exhibited last month.

Khaddour said that the initiators will take the necessary measures to ensure the success of the event. “A number of local companies and institutions — which will contribute to this project — were contacted so it can be ready by Nov. 16, 2019,” he said.

For Palestinians, the keffiyeh is a symbol of their resistance, struggle and national identity. Some claim the keffiyeh was first worn by the Sumerians in Mesopotamia, and that it was initially the headdress of priests. More recently, the keffiyeh was worn by peasants, presumably to protect them from the sun or to wipe off sweat from their faces while working in the fields.

The keffiyeh — also called shemagh or hattah — became a symbol of the resistance during the 1936 Arab Revolt against the forces of the British Mandate. By the 1960s, it had become a symbol of the PLO and was worn by men and women alike. Yasser Arafat, the leader of the PLO, sported it, as well as Palestinian activist Leila Khaled, the first woman who was part of the team that hijacked an airplane in 1969.

Hamza al-Akrabawi, a folklore researcher and storyteller, told Al-Monitor, “The keffiyeh was emblematic during the revolution — slogans and songs called on people to drop the tarboosh [red, rimless hat] and wear the hattah instead.”

The keffiyeh also served to help militants conceal their identities. “The keffiyeh remained as a symbol of the militant identity of the Palestinians during the first intifada in 1987 and the second intifada in 2000. Young men and women wore them during confrontations with the occupation forces in Palestinian cities, villages and camps,” Akrabawi said.

Palestinian writers, poets and painters all used the symbol of the keffiyeh in their works. The late poet Mahmoud Darwish wrote in one of his most famous poems, “Identity Card”: Write down:/ I am an Arab/ Hair coal-black/ Eyes brown/ My distinguishing feature/ On my head a keffiyeh topped by the igal/ And my palms, rough as stone/ Scratch anyone who touches them.

Famous Palestinian cartoonist Naji al-Ali documented the keffiyeh as a symbol of Palestinians in hundreds of cartoons, and Syrian artist Burhan Karkutli also used it in many of his drawings about Palestine. More recently, the Palestinians are singing along to Mohammed Assaf’s song “Alleh El keffiyeh,” Arabic for "Raise the Keffiyeh up High."

Akrabawi noted, “The keffiyeh has become a symbol of the Palestinians, and thus those who are in solidarity with the Palestinian cause — in the Arab world or abroad — wear it.”

Not everyone has been met with a positive reaction when wearing this headdress. Although various fashion designers, such as luxury brand Givenchy and chain store Zara, have used the keffiyeh without much resistance, the Palestinians were outraged when Israeli designer Yaron Minkowski had Israeli models wear it during Tel Aviv Fashion Week in 2016. Minkowski said that he only aimed to promote coexistence among the two peoples.

The record for the world's longest keffiyeh belongs to a 6,552-meter (21,496 feet) chain of scarves laid on the ground of Beirut's Sport City Stadium on May 15, 2010, to form the number 194, signifying the 1948 United Nations resolution that grants Palestinians the right to return to their homes.