With US support, Saudi Arabia and Iraq are getting close to each other to minimize Iran's influence in Iraq. 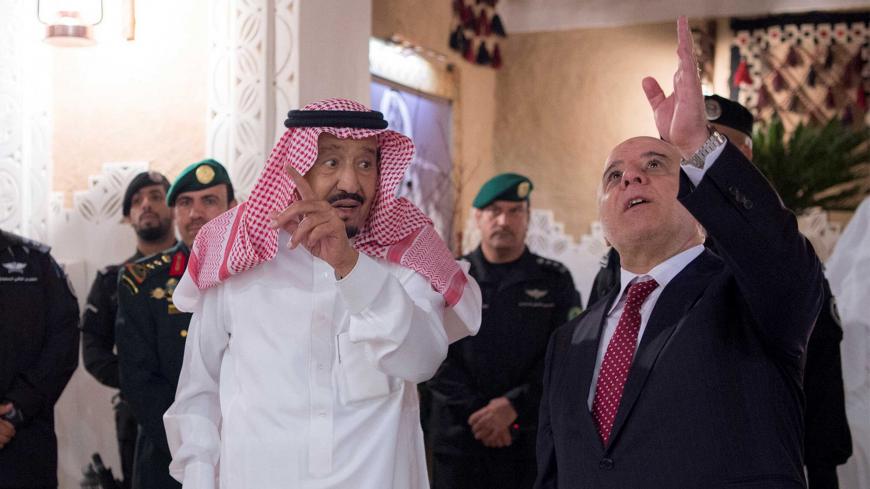 BAGHDAD — Iraqi-Saudi relations have witnessed significant improvement after years of boycott that had worsened during Nouri al-Maliki’s rule between 2006 and 2014. On Oct. 22, the establishment of a Coordination Council between the two countries was announced.

Iran, which is seeking to expand its influence in Iraq, might not like this rapprochement, especially following the latest meeting between Iraqi Prime Minister Haider al-Abadi and Saudi King Salman bin Abdul-Aziz Al Saud that took place with US blessing when US Secretary of State Rex Tillerson attended the launching of the Coordination Council.

Former Iraqi Ambassador to the US Lukman Faily told Al-Monitor, “Over the past years, the US attempted to take serious steps to mend ties between Iraq and Saudi Arabia. With this development, the region’s geopolitics will change.”

Saudi newspaper Asharq al-Awsat reported that the Iraqi-Saudi rapprochement will “curb the appetite of the parties that cause stability,” in a clear reference to Iran, which Saudi Arabia always accuses of “destabilizing the situation in the region.”

The Iraqi-Saudi rapprochement does not include the Iraqi state in its explicit form only, but also expands to political parties that are at odds with Iran such as the Sadrist movement led by Muqtada al-Sadr, who visited Saudi Arabia and the United Arab Emirates two months ago and headed to Jordan recently to visit King Abdullah.

Saudi Arabia is seeking alliances that can cement its presence in Iraq through political, economic or social relations. The kingdom invited several Iraqi tribe sheikhs to meet with Salman there.

Salman al-Ansari, the head of the Saudi American Public Relation Affairs Committee in the United States, told Al-Monitor, “Iraq is a great country and should not be the backyard of the extremist Iranian state. Many regional and international variables are working toward cutting off Iran’s bloodstained hands.”

Ansari said the Iraqi-Saudi rapprochement is important for Arab security and that the coordination council would help both countries cooperate on several levels such as fighting terrorism and reconstruction.

Saudi Arabia will not have it easy in fighting Iran over influence in Iraq, as Iran has been cementing its influence in Iraq for 14 years and has been garnering political and popular support as well as creating armed groups under the pretext of sectarian rapprochement.

The spokesman for Asaib Ahl al-Haq, which is affiliated with the Popular Mobilization Units, Naim al-Aboudi, talked about the importance of Iraqi openness to its Arab surroundings. But Aboudi, who belongs to a political bloc that considers velayat-e faqih an authority, told Al-Monitor that the Iraqi government must not rush into opening up until Saudi Arabia proves its good intentions toward Iraq. He said, “Saudi Arabia and other Gulf countries destabilized Iraq’s security and facilitated the entry of terrorists into the country.”

Iran’s allies in Iraq do not want their country to be part of the US-Arab axis. They want a balance in Iraq’s relations without having to join any axis. Aboudi said that Iraq is an axis in itself, drawing Arabs closer to Iran and Turkey.

Can Saudi Arabia play a big role in Iraq and stabilize it, 14 years after Iranian economic, political, cultural and armed dominance? Perhaps it can with continuing US support for Iraq and Saudi Arabia.

The high-level Iraqi visits to Jeddah and Riyadh have increased lately on the diplomatic, economic and military levels. Political figures and parties as well as leaders of armed groups translate relations between Iran and Iraq.

Saudi Arabia’s goals in Iraq are not limited to mending ties, but go beyond that. The kingdom wants to curb Iranian influence and make a strong entrance into the Iraqi market.

Saudi Arabia took key practical steps in this direction. It opened a consulate in Najaf, which is considered the Vatican of the Shiites, and launched direct flights between Baghdad and Riyadh. The kingdom has also increased its participation in international economic forums in Baghdad, counting 60 companies that partook in Baghdad’s International Fair.

Saudi Arabia and Iraq will share the profit of curbing Iranian influence in Iraq. Abadi’s government is trying to reduce the Iranian impact on Iraq’s decision-making gradually and definitively. Saudi Arabia — with US support — will be one of the contributing factors to scaling down Iran’s presence in Iraq.

The Iraqi-Saudi rapprochement indicates that Iranian influence in Iraq will not remain the same. But Iran, which has power over Iraqi state institutions and has armed groups advocating for it, will create huge hurdles in the way of Iraqi and Saudi ambitions.

The Saudi-Iraqi rapprochement will clearly impact the Iraqi political arena, especially as it did not limit itself to Sunni entities, but also included Iraqi state institutions and different sects like Shiites who are the majority in the country.