The Iraqi government is showing interest in completing the pilgrim route linking Iraq and Saudi Arabia, which will facilitate the arrival of religious visitor convoys between the two countries and will enhance trade and political relations. 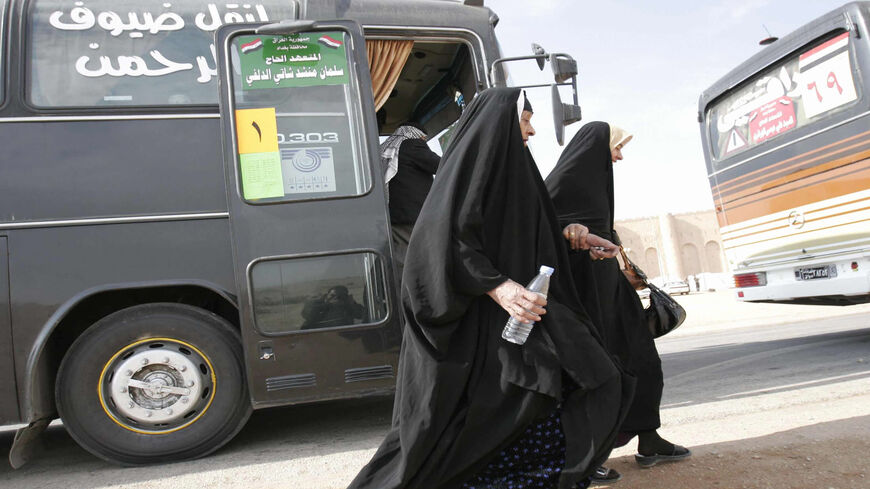 Iraqi women ready to board a coach, part of a convoy, heading south of the Iraqi city of Karbala some 120 kilometers (74 miles) from the capital Baghdad, toward the Saudi Arabian city of Mecca, Nov. 22, 2008. - Mohammed Sawaf/AFP via Getty Images

During his visit to Najaf governorate Jan. 6, Prime Minister Mustafa al-Kadhimi issued directions for the completion of the land pilgrim route linking Iraq from Najaf to the holy lands in Saudi Arabia. Work had started in 2013 for the establishment of this route but was halted due to the financial crisis and the coronavirus pandemic.

The project coincides with the official opening of Iraq’s Arar border crossing with Saudi Arabia amid government efforts to boost relations between Baghdad and Riyadh, which witnessed successive crises, as diplomatic relations resumed in 2015 following 25 years of rupture due to the Iraqi invasion of Kuwait in 1990.

The new pilgrim route on the Iraqi side runs parallel to the Zubaydah trail, located on the other side of the Iraqi-Saudi border, which pilgrims from Iraq and neighboring countries used to take to Mecca in Saudi Arabia. It was built during the Abbasid rule in 786 and was named after Zubaydah, the wife of Abbasid Caliph Harun al-Rashid. This trail included stations, rest stops, ponds and canals.

The project has stalled in the past because of previously fractious relations between Baghdad and Riyadh. For example, in 2009, the Saudi Al Eqtisadiah newspaper accused the former Iraqi government of employing the pilgrimage for political purposes.

In the same year, the transportation of 30,000 Iraqi pilgrims to Saudi Arabia was hampered due to the poor security conditions in Iraq and the amount of time needed by airlines to obtain licenses to enter the airspace.

But relations have dramatically improved in recent years under the current Iraqi government.

Iyad al-Zorfi, director of Al-Noor city district, which is an important station on the pilgrim route, and from which the daily operations of the project begin, told Al-Monitor, “There is an urgent desire on the Iraqi and Saudi parts to revive the overland pilgrim route that starts from the city of Najaf in Iraq to Al-Madinah Al-Munawwarah in Saudi Arabia.”

Zorfi said, “This road is the shortest surveyed by engineers, and it stretches over about 300 kilometers [186 miles] into the border line with Saudi Arabia.”

He noted, “There was an urgent need for Kadhimi’s decision when he visited Najaf, to resume the establishment of the road after the project had stopped, as he approved its resumption in coordination with the Ministry of Housing and Planning.”

Zorfi said that he expects “the project to be economically important, as it revives the returns of land transportation for both countries, boosts trade and develops the areas located along the road, as well as the tourism sector. Residents of the two countries will be able to exchange visits to religious places, and the central location of Najaf makes it suitable for organizing pilgrimage and Umrah convoys through Najaf to neighboring countries such as Turkey and Iran.”

He said, “The road is of paramount importance for the historical aspect, as it revives the historic Zubaydah road and the important archaeological monuments that the road passes through, and there is coordination with the Department of Antiquities in the Ministry of Culture in this regard.”

Zorfi added, “The road consolidates security and stability, as it prompts the two countries to control the borders and checkpoints along the road, which provides an opportunity for stability and confidence between Iraq and Saudi Arabia.”

Wissam Muhammad Ali, the project's representative of the Ministry of Housing and Construction, told Al-Monitor, “The Roads and Bridges Department in the ministry is supervising the project, which consists of two phases for the moment, each covering 100 kilometers [62 miles], and the project is implemented by Iraqi companies.”

He said, “The road [runs up] to the Saudi border, and it stretches over 239 kilometers [148 miles] inside Iraq. It is executed based on solid asphalt specifications to resist weather conditions in Iraq."

He added, “Drivers will be able to make it to Saudi Arabia in just 2½ hours.”

Ghazi Faisal Hussein, director of the Iraqi Center for Strategic Studies, told Al-Monitor that this road is of particular importance.

“It opens wide horizons for religious tourism and pilgrims from Central Asia and Iran to Mecca to perform religious duties, and it also offers an opportunity for coexistence and partnership between peoples,” he noted.

Former Iraqi member of parliament Mithal al-Alusi, founder of the Democratic Party of the Iraqi Nation, shed light during his interview with Al-Monitor on the history of communication projects between Iraq and Saudi Arabia.

He said, “The relations between the two countries have been plagued for decades by political and ideological problems.”

Alusi noted, “The revival of the project will not have a significant impact at the economic level, as both Iraq and Saudi Arabia have well-known ports and border crossings, but this does not mean that the road will not attract pilgrims, particularly from central and southern Iraq, to ​​the holy sites.”

He added, “Reviving the road project would serve as a strategic link that will benefit neighboring countries such as Turkey, as it will reduce the cost of sending its goods to the Gulf, while Iran wants to find land roads linking the Shiites in its country with the Shiites in Iraq and eastern Saudi Arabia.”

While Alusi believes that “the project may be one of the repercussions of dividing Iranian-Saudi influence in Iraq,” he called on “the Iraqi government to present economic studies for the feasibility of outlets with neighboring countries, instead of projects resulting from emotions so that these projects do not turn into an echo of foreign decisions.”

Samarra’s Kaimakam Mahmoud Khalaf al-Samarrai told Al-Monitor, “The overland pilgrim route with Saudi Arabia is important for all religious cities in Iraq, including Samarra, which has an important religious center, because it will enhance the access of religious delegations to this center from neighboring countries.”

Samarrai believes that “linking the religious cities in Iraq, including Samarra, as well as Najaf, with special tracks, be it through Saudi Arabia or other countries and cities, will enhance the economy of those cities.”

He said, "There is a project to also turn Samarra into a link between the center and the south so that religious delegations can get there via special paths while the pilgrim route with Saudi Arabia can be linked to tracks.”

The importance of the land pilgrim route travels beyond the religious dimension to the political rapprochement and economic and security cooperation between Iraq and Saudi Arabia in a region that witnessed many political and sectarian differences and pushed trust between the two peoples to its lowest levels.