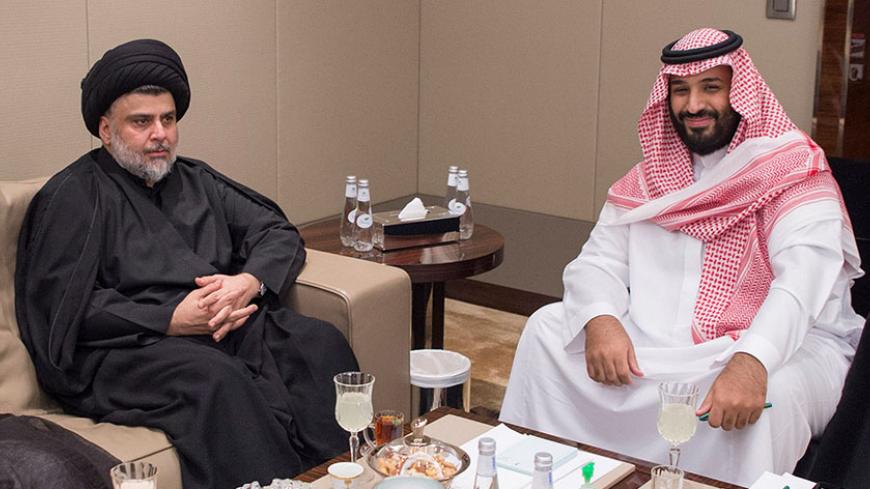 For the first time in 11 years, Muqtada al-Sadr, the leader of the Sadrist movement, visited Saudi Arabia at the official invitation of the kingdom. On July 30, Sadr met with Saudi Crown Prince Mohammed bin Salman. The visit is part of Sadr's efforts to keep a balance in his relations with neighboring countries in a bid to ease sectarian tensions in Iraq and strengthen his position as an Iraqi leader.

Saudi-Iraqi relations have recently witnessed a breakthrough following a period of lukewarm relations that started in the early 1990s. Senior officials of the two governments have recently exchanged visits and talked about developing relations between the two countries in various fields. But the significance of Sadr's recent visit lies in the fact that he is a religious and political leader from a prominent Hawza-affiliated family. What makes the visit even more paramount is the shift in Sadr's approach to the domestic events and regional orientations of the kingdom.

Previously, Sadr held positions that were hostile to Saudi Arabia’s domestic events and dealing with Shiites in the kingdom. For example, in January 2016, he issued a strongly worded response to the execution of Shiite cleric Nimr al-Nimr in Saudi Arabia and accused the Saudi rulers of practicing “systematic injustice against minorities and the oppressed.” At the time, Sadr called on Shiites in Gulf states to “have the courage to respond, even if through mere peaceful demonstrations.”

However, Sadr's positions on these issues differed completely during his last visit, in which he decided to focus primarily on Iraqi issues. Sadr's spokesman Salah al-Obeidi said in a TV interview Aug. 2, “Sayyid Muqtada al-Sadr said before going: 'Unless they raise issues that are not related to Iraq, I will be sticking to Iraqi developments because otherwise this would be an interference in their domestic affairs.'”

Following about four decades during which Shiite clerics ruled Iran and 15 years during which Shiite religious parties ruled Iraq, Shiite clerics in Iraq are reconsidering their perception of the concept of the nation and the umma. For example, supreme religious authority Ali al-Sistani called for the establishment of a civil state in Iraq. A civil state is a secular way of governance that respects people's beliefs and religious peculiarities.

Sadr is trying to adhere to these concepts to reach a moderate position that helps ease the sectarian crises plaguing the region in general and Iraq in particular. This was reflected in the results of the visit, in which the two sides stressed the need “to adopt a moderate religious and media discourse that calls for peaceful coexistence and cooperation as well as the achievement of common interests between the two countries and peoples,” as per the statement issued by Sadr's office on Aug. 1 after the visit.

But Sadr's attempt to reach an understanding with Saudi Arabia has generated widespread criticism from some Shiite circles in Iraq and other countries, such as Iran and Lebanon. These critics believe that Sadr’s visit is an unjustified disregard for the injustices suffered by the Shiite minority in the kingdom. These circles are against Sadr not tackling what they consider to be a negative role played by the kingdom in supporting terrorist groups that are killing Shiites in several countries in the region. In addition, these parties believe the visit is part of Saudi Arabia's campaign to isolate Iran in the region.

Saudi Arabia is trying to isolate Iran by forging ties with Shiite groups that do not believe in Iran's projects in the region. In a clear reference to this trend, Mohammed al-Sulami, the head of the Arabian Gulf Center for Iranian Studies, said July 30, “We put all the Shiites under one category and said that they follow Iran. We should re-examine the Shiites again and revive the Shiite Arab authority in Najaf and Karbala, not in Qom."

“I believe we have to differentiate between the original Shiite doctrine and the new extremist Khomeinist [Ruhollah Khomeini] doctrine,” State Minister for Gulf Affairs Thamer al-Sabhan tweeted July 31, but he consequently deleted the tweet. According to Obeidi, Sadr's objection to the tweet while in Saudi Arabia led to its deletion.

Sadr’s recent movements indicate his willingness to distance himself from Iran. Senior fellow at the Middle East Institute at the University of Singapore, Fanar Haddad, told Al-Monitor, “For personal, ideological and practical reasons, Sadr would find it difficult to champion an openly Shiite-centric, pro-Iran stance. By visiting the kingdom of Saudi Arabia, I think Sadr is signaling to Iran and its Iraqi allies [Sadr's competitors] that he has options.”

Asked about the importance of Sadr’s Arab identity, Haddad said, “Sadr wants to confirm that he is Arab, but that does not mean that he is against Iran, and this trend resonates within the ranks of Sadr's popular base.” And this Arab identity assertion goes in line with the Saudi policy toward the non-Iranian Shiite entities in the region.

Iran does not seem to have many options regarding Sadr’s approach in his bid to distance himself from Tehran by relying on his broad popular base.