Ayatollah Hashemi Rafsanjani has said that cooperation between Iran and Saudi Arabia can resolve some issues, but conceded that there are still many differences at the moment. 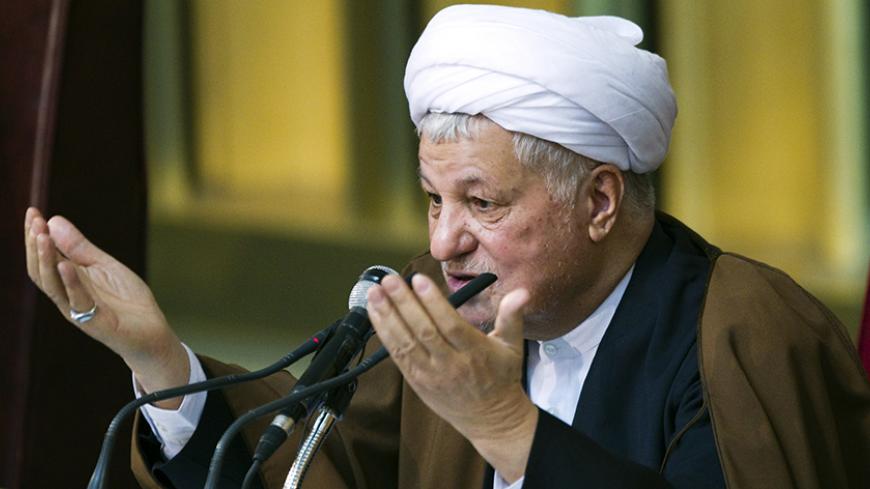 Ayatollah Hashemi Rafsanjani, head of Iran’s Expediency Council, has said that to resolve many of the issues plaguing the Middle East, there needs to be cooperation between the two regional rivals, Iran and Saudi Arabia. In an extensive interview with Mehr News Agency, when Rafsanjani was asked about Iran-Saudi relations, he said that after statements by Ayatollah Ahmad Jannati about the passing of King Abdullah bin Abdulaziz, “The situation became worse.”

During Friday prayers, in a dig at Rafsanjani, Jannati said of the passing of the king that condolences must be sent to the United States, Israel and “those inside who eat from his table,” and “congratulations” must be given to the faithful. Jannati’s comments were condemned by the Gulf Cooperation Council and even some Shiite religious leaders in Iran. Iranian opposition website Saham reported that as a result of Jannati’s comments, Iranian clerics who lead groups to Mecca were prevented from entering Saudi Arabia and that other Iranian clerics were even strip-searched inside the country.

The statement demonstrated the animosity between the two countries and the common knowledge inside Iran that Rafsanjani has been lobbying to improve relations.

Rafsanjani believes that relations with Saudi Arabia can be improved once again, just as they were after the Iran-Iraq war in the 1980s. Rafsanjani said that after the 1979 revolution, relations with Riyadh deteriorated over Tehran’s desire to export the revolution and the Saudi support for Iraqi President Saddam Hussein in the war. However, when he became president in 1989, then-Supreme Leader Ayatollah Ruhollah Khomeini urged him to improve ties because Riyadh had banned Iranian pilgrims to Mecca, insisting citizens of a Muslim country must be able to go perform a religious duty.

Rafsanjani said that there had been two important meetings with Abdullah, one in Senegal and one in Pakistan. At the time, one of the main problems between Iran and Saudi Arabia was the price of oil. According to Rafsanjani, Abdullah said that if oil becomes too expensive, oil-purchasing countries will seek other sources of fuel. Interestingly, some believe that the sudden drop in oil prices today is related to Saudi desires to make shale gas an undesirable investment. Rafsanjani said he was able to satisfy Abdullah’s concerns regarding other forms of fuel.

Rafsanjani also said that relations had gone beyond the diplomatic, and that his and the king's families had become close. He said that current King Salman bin Abdulaziz, who was mayor of Riyadh at the time, even threw a party for them. He described those times as “friendly and brotherly” but says that now, “We have many problems in Bahrain, Syria, Iraq, Lebanon and even the occupying regime of Jerusalem [Israel]. … These are the problems, and we have to solve them. In my opinion, we can return.”

Rafsanjani stressed, “If our two countries can cooperate with each other, many things will be solved,” saying that it could eliminate a great deal of terrorism. He added that different commissions could be created to address the various issues. For instance, in the last agreement between Rafsanjani and Abdullah, they had agreed upon a commission to allow clerics to address religious differences so that they could focus on governance.

Given the regional issues mentioned above, however, powerful decision-makers in Tehran and Riyadh show no sign of being ready for a decrease in tensions between the two countries.