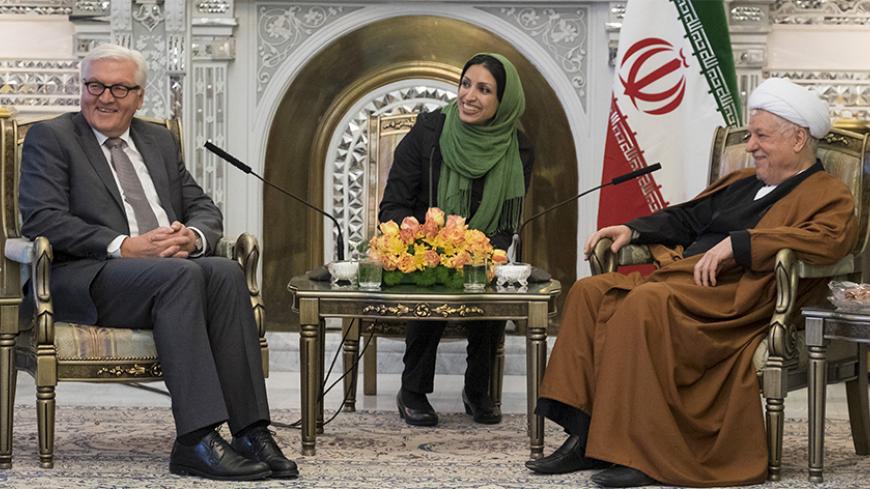 While visiting Tehran to discuss trade between Iran and Germany, German Foreign Minister Frank-Walter Steinmeier also met with Ayatollah Ali Akbar Hashemi Rafsanjani to encourage his country to work to reduce tensions with regional rival Saudi Arabia, which is currently one of the most intractable crises plaguing the Middle East. Iran and Saudi Arabia, which are at the political centers of Shiite and Sunni Islam, respectively, are currently in indirect military conflicts in some of the deadliest wars in the Middle East, including Syria and Yemen.

In an interview with Iranian media before his trip, Steinmeier said he planned to mediate between Iran and Saudi Arabia to find a political solution to Syria’s civil war. Rafsanjani had been previously tasked with easing tensions with Saudi Arabia after the Iran-Iraq War of the 1980s and he has been a vocal advocate of easing tensions now. The transcript provided by Rafsanjani’s website of the Oct. 18 meeting with Steinmeier, however, indicates that the hajj stampede in Saudi Arabia that killed 474 Iranians has further complicated a possible de-escalation between the two countries.

Steinmeier said, “Political differences between Iran and Saudi Arabia have resulted in strengthening terrorists in the region, and if these two Islamic countries cooperate, other Islamic countries will also put aside their differences.” Rafsanjani expressed hope that both countries can use their experiences in fighting terrorism to resolve differences but also said that to fight terrorism, there must be “an all-encompassing cooperation” to first impede the progress of terrorists and then an effort to uproot them, though he did not specify how.

Rafsanjani also added that after the 1980-1988 Iran-Iraq War, despite the fact that Saudi Arabia supported Iraqi President Saddam Hussein in the war, Rafsanjani worked to ease tensions with Saudi Arabia. During Steinmeier's Tehran University visit, some students held signs protesting Germany's support of Saddam in that war.

Rafsanjani had good relations with former Saudi King Abdullah bin Abdulaziz and said that had their joint plan of creating a commission to address religious differences been implemented, it could have resolved many differences; however, he also said the current rulers of Saudi Arabia sometimes seem unseasoned.

On the hajj stampede, Rafsanjani said that instead of strengthening the relations between Muslims, “It wounded the feelings of Muslims.” Saudi Arabia maintains 769 people were killed in the September stampede in the city of Mina while the Associated Press has reported that nearly twice that number of people had died.

That a high percentage of Iranians were the victims of the stampede has angered many Iranian citizens and officials, making addressing Iran-Saudi relations even more difficult. Supreme Leader Ayatollah Ali Khamenei, in speaking with hajj officials Oct. 19, said that the hajj stampede must not be forgotten and that the issue should be "raised at world assemblies for years.” Iranian officials believe that Saudi management and poor emergency response led to the high number of deaths.

In response to how Iran and Saudi Arabia can address issues, Rafsanjani said that political games must be put aside and attention paid to the crimes committed by Israel against the Palestinians.

With the international sanctions against Iran to be removed as a result of the implementation of the nuclear deal in the coming days, Steinmeier said that Germany is ready for economic trade and political relations with Iran.