Some Iranian officials are speculating that the Iranians still missing after the hajj disaster may have been arrested as Iran continues to watch the Saudi investigation with distrust. 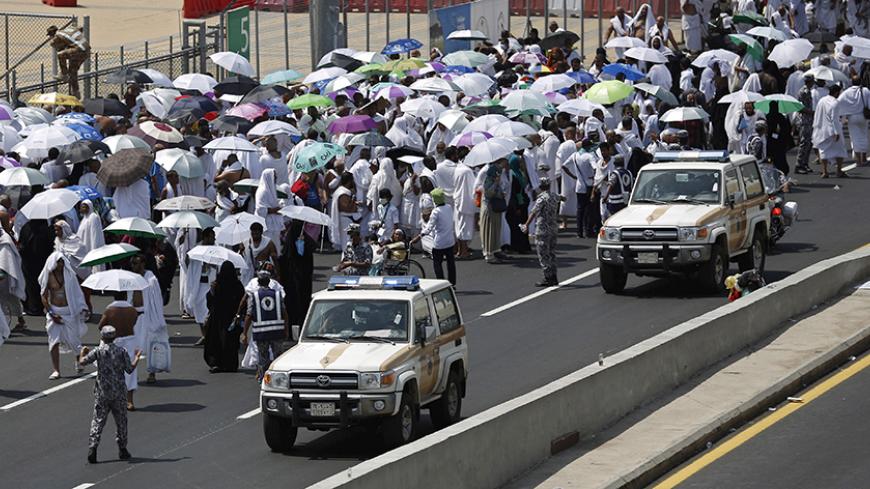 Police vehicles drive past pilgrims on a road in Mina, near the holy city of Mecca, Sept. 24, 2015. - REUTERS/Ahmad Masood
Arash Karami
@@thekarami
October 8, 2015

After a hajj stampede that killed 464 Iranians near the city of Mecca in Saudi Arabia on Sept. 24, rumors have begun to circulate as to why, after two weeks, 69 Iranians are still unaccounted for.

On Oct. 6, Iran’s Health Minister Hassan Ghazizadeh Hashemi said, “Some of the missing may be among the arrested, or in detention centers or prisons of Saudi Arabia, or in hospitals.” Foreign Ministry official Hassan Ghashghavi said, “We do not know if these dear ones have joined God or if they have been detained somewhere. Until their bodies have been returned we can’t speak with certainty about this matter.”

The comments by the two officials made headlines in Iranian media. A number of high-ranking scientists and diplomats were among the hajj pilgrims, and their possible detention or interrogation would expose Iran to security or intelligence risks.

However, today, Supreme Leader Ayatollah Ali Khamenei’s representative to the hajj pilgrimage, Hojat al-Islam Seyed Ali Ghazi Asghar, asked officials not to speculate about the missing Iranians. “News in recent days based on the arrest of a number of Iranian pilgrims is not true,” he said. “All of the hospitals in Saudi Arabia and possible locations that were given where the bodies are held have been searched.” Ghazi Asghar asked Iranians to “not pay attention to rumors.”

There have been conflicting reports about the numbers missing and dead from the stampede. Saudi Arabia claims that a total of 769 were killed. As of its latest count, the Associated Press has put this number at over 1,360. Indonesia, Pakistan and India also claimed that the pictures offered to them by Saudi Arabia to identity the dead puts their number at 1,100. Saudi authorities said that those countries were shown pictures of those who also died from natural causes while on the hajj.

The tragedy has pushed Iran-Saudi tensions to new levels, given that Iran suffered the most casualties from the stampede. Khamenei, in one of his strongest speeches yet against Saudi Arabia, warned that Iran’s “self-restraint” was coming to an end and if the Saudi authorities do not resolve the issue satisfactorily, Iran’s response will be “tough and harsh.”

Despite comments by Ghazi Asghar meant to lower tensions and put an end to rumors, other Iranian officials continued to make harsh statements Oct. 8.

Gen. Yadollah Javani, a senior adviser to Khamenei from the Islamic Revolutionary Guard Corps, said in reference to Khamenei’s statement that the “IRGC is ready and has the necessary ability to implement a command.”

Hojat al-Islam Mohammad Mohammadi Golpayegani, who heads Khamenei’s office, called for Islamic countries to conduct an independent inquiry into the stampede, saying, “Whether the Mina tragedy was intentional or semi-intentional, it was connected to the incompetence of the Al Saud family.” Golpayegani added that Khamenei would not drop this issue until it is resolved.

At the funeral on Oct. 8 of a former Iranian ambassador who was killed in the stampede, Hojat al-Islam Mostafa Mirlouhi claimed, “The security of Mecca and Saudi Arabia is in the hands of Zionist companies.”