One year after the hajj disaster that killed nearly 500 Iranians out of more than 2,000 people, Iran’s Supreme Leader Ayatollah Ali Khamenei is calling for an international body to investigate. 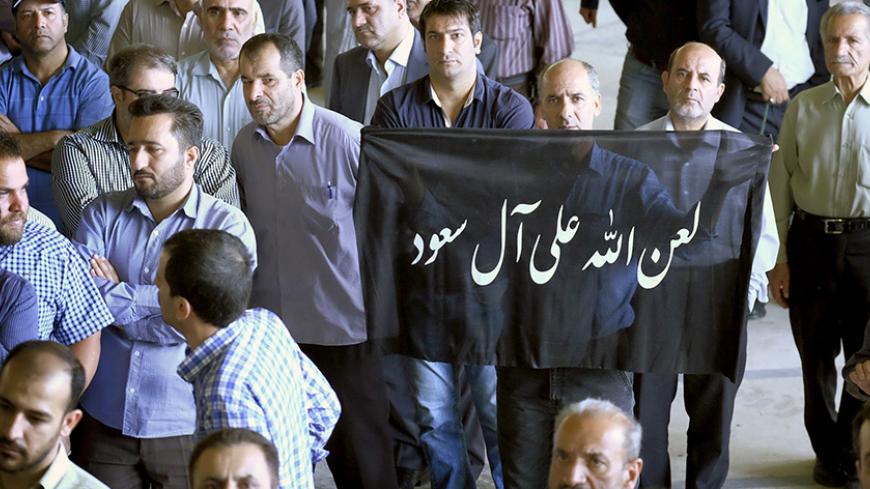 A man holds a banner that reads "God's curse on Al Saud" during the funeral of pilgrims killed in a stampede during the 2015 hajj pilgrimage, in Tehran, Iran, Oct. 4, 2015. - REUTERS/Raheb Homavandi/TIMA
Arash Karami
@@thekarami
September 7, 2016

During the 2015 hajj pilgrimage in Saudi Arabia, more than 2,000 Muslims lost their lives in a stampede in the city of Mina. Nearly 500 of the victims were Iranian pilgrims. One year later, Iran’s Supreme Leader Ayatollah Ali Khamenei met with the families of those who lost their lives and called for an international investigation into the stampede.

“The events of Mina and the loss of life of Iranian pilgrims with parched lips under the scorching sun is a deeply sorrowful and unforgettable event,” Khamenei said Sept. 7, calling the Iranians who lost their lives “martyrs.”

Reiterating figures presented by Iran, Khamenei asked why other governments have not raised issues with what happened in Mina. Saudi officials put the death toll in the 700s. The Pakistani government, a recipient of Saudi aid, ordered the Pakistani media not to criticize the Saudis' handling of the Mina stampede, which killed 83 Pakistanis. Mali, Nigeria, India, Indonesia, Bangladesh and Egypt all lost hundreds of citizens as well. Iran's death toll, the highest of any country, inflamed tensions between the two regional rivals.

Hammering on Iran’s demands for new management of the hajj, Khamenei said, “If it was not intentional, this level of mismanagement and incompetence … is a crime.” He added that there was no guarantee that such an incident would not happen again.

Khamenei continued, “The incompetence of the Saudis and their failure to provide security for the pilgrims in the house of God in reality showed that this government is not capable of managing the two holy mosques." Al-Masjid al-Haram in Mecca and Al-Masjid an-Nabawi in Medina are the two holiest places in Islam.

According to Khamenei, a fact-finding committee comprised of Islamic countries and human rights advocates should investigate what happened in Mina. “If the Saudis are certain of their claim of innocence, they should not silence people with money and they should allow a fact-finding mission to closely investigate,” he said.

While the attack on the Saudi Embassy in Tehran caused the two countries to officially sever ties, relations had already deteriorated to an irreparable point with the Mina stampede and its aftermath. Iranians were livid at the Saudi management of the hajj and response to the tragedy. According to Khamenei, the Saudis have not offered any apology for what happened. Some Saudi media outlets blamed Iranian pilgrims for causing the stampede while Iranian officials called for Saudi Arabia to give up management of the hajj, a great source of revenue and clout in the Muslim world. The fallout was so severe that according to Iranian hajj officials, the Saudis placed serious obstacles in front of Iranian pilgrims this year, causing them to miss the hajj for the first time in nearly three decades.

While Khamenei’s comments have been the harshest, other Iranian leaders and officials have also criticized Saudi Arabia. When the Saudi grand mufti said Iranians are not Muslims because they are descendants of Zoroastrians, usually mild-mannered Foreign Minister Mohammad Javad Zarif responded in a tweet that there is “no resemblance between Islam of Iranians & most Muslims & bigoted extremism that Wahabi [sic] top cleric & Saudi terror masters preach.”

Even Iran’s President Hassan Rouhani and the rest of the political camp of Ayatollah Ali Akbar Hashemi Rafsanjani, who advocates better relations with the Saudis, has said that the Saudi government should be punished for Mina. Echoing Khamenei’s calls for management of the hajj to be revoked, Rouhani said that Islamic countries should cooperate to make sure an “honorable hajj” is conducted.