The Muslim festival to mark Eid al-Adha has done little to reduce tensions between regional rivals Iran and Saudi Arabia. 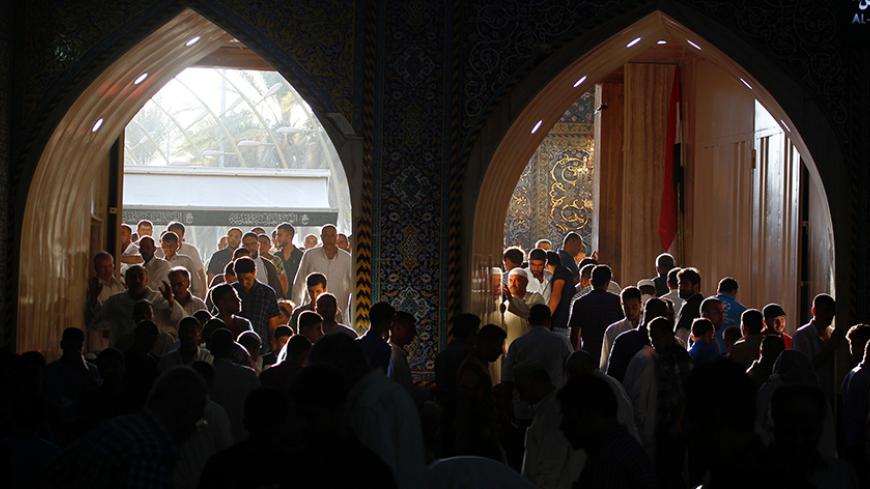 Shiite Muslim pilgrims, mostly from Iran, near the shrine of Imam Abbas on Arafah day, the second day of hajj, in the Iraqi city of Karbala, Sept. 11, 2016. Barred from Mecca amid an escalating spat between Tehran and Saudi Arabia, masses of Iranian Shiite faithful have converged on the holy city of Karbala for an alternative pilgrimage. - HAIDAR HAMDANI/AFP/Getty Images
Arash Karami
@@thekarami
September 13, 2016

The Muslim festival of Eid al-Adha, which marks the end of the hajj pilgrimage, has become another opportunity for regional rivals Iran and Saudi Arabia to continue their propaganda wars against one another.

Ayatollah Ahmad Khatami, a conservative cleric and interim Friday prayer leader, used Eid al-Adha to criticize Saudi Arabia over the Mina stampede during the 2015 hajj that killed over 2,000 people, including 472 Iranians. "When I was heading to prayers last year during Eid al-Adha, I was told about the tragedy at Mina,” Khatami recounted.

Blaming Saudi Arabia for not reaching the pilgrims sooner, many of whom died of thirst, Khatami said, “At the very least the issue is that they were at fault. With cameras they could see that Muslims had fallen to the ground, and delivering water by helicopter or other means could have saved half of the lives. They did not give permission to the Iranian Red Crescent and their officials did nothing; this means it’s a crime. The criminals must be sentenced and punished in an Islamic court.”

He added, “Rather than addressing the wounded, they put them in containers with the dead, martyring them alive.”

Khatami said that of the 37 countries who lost citizens in the stampede, only Iran has raised its voice. He accused the countries that remained silent of “materialism," adding that if 7,000 people had been killed in such a manner in a European country “their yelling would have turned the world deaf.” Iranian officials have put the total number of deaths from the Mina stampede at 7,000.

Khatami said that officials from Iran’s Foreign Ministry will pursue a legal case on behalf of the families of victims of the stampede.

As a result of the Mina stampede and the high number of Iranians killed, Saudi Arabia and Iran were unable to come to an agreement to allow Iranians to attend his year’s hajj pilgrimage. Iran said that they were put under special restrictions, while Saudi Arabia said that Iran wanted to hold protests.

Given the absence of the Iranians, Saudi Arabia decided to air a Persian-language TV program from Mecca. “The goal of this program is to deliver the message of hajj — the lasting meaning of Islam — to Persian-language pilgrims around the world,” said Saudi Minister of Culture and Information Adel bin Zaid al-Toraifi. Over 100 million people speak Persian in approximately half a dozen countries. The intended audience is likely Persian-language speakers in Iran; the program will air Sept. 10-15.

Iran’s parliament Speaker Ali Larijani issued a message in honor of “the first anniversary of the martyrs of Mina,” saying, “This bitter reality is a great sign of the incompetence of the hajj organizers in Saudi Arabia and the irresponsibility of the rulers of this country in managing the hajj.” Echoing comments by Supreme Leader Ayatollah Ali Khamenei, Larijani said that human rights organizations should create a fact-finding mission to investigate what occurred during the stampede.