After Riyadh severed diplomatic relations with Tehran and suspended direct flights between the two countries, some are wondering if Iranian pilgrims will be banned. 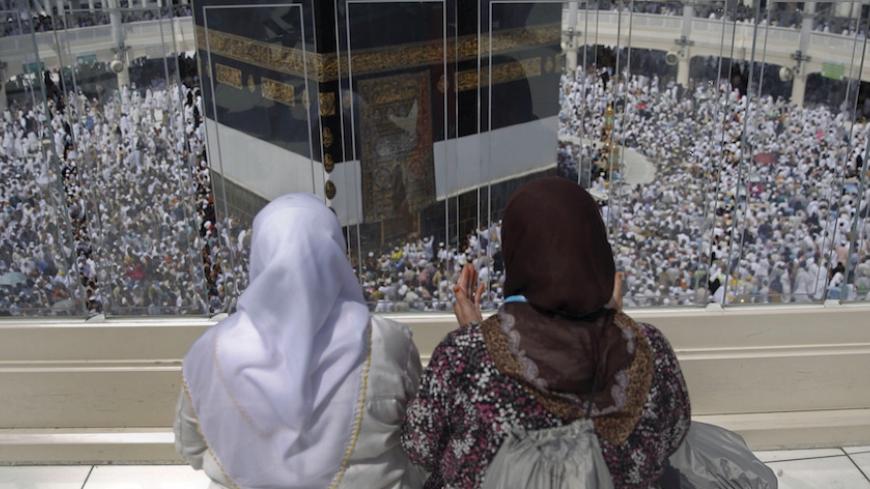 Muslim pilgrims pray around the holy Kaaba at the Grand Mosque ahead of the annual hajj pilgrimage in Mecca, Sept. 21, 2015. - REUTERS/Ahmad Masood
Arash Karami
@@thekarami
January 5, 2016

After Saudi Arabia severed ties with Iran, the chairman of Iran’s Hajj and Pilgrimage Organization, Saeed Ohadi, said that the decision to continue or suspend hajj travel to Mecca and Medina would ultimately be up to Supreme Leader Ayatollah Ali Khamenei.

Ohadi said that at the moment, plans for the next hajj pilgrimage are taking place as scheduled and nothing has been changed. After the Saudi announcement that it was cutting ties with Iran, pictures surfaced online of Saudi officials removing the sign of the office of pilgrims affairs in Mecca belonging to Iran, and some Iranian social media users began to call for a boycott of the hajj, which will take place in September.

Iranian member of parliament Mohammad Ali Esfanani, spokesman for the parliament’s Judicial and Legal Committee, said the termination of diplomatic relations means that the hajj should also be suspended.

The hajj pilgrimage is mandatory for Muslims who are able to afford it. Umrah pilgrimage, which is not mandatory and can be undertaken at any time of the year, was suspended in April after two Iranian boys were sexually assaulted by Saudi security at Jeddah airport.

Esfanani said that while the hajj is mandatory, it can be excused when there are difficult circumstances. He rejected the idea of having another country handle visa issues for the hajj.

This is not the first time there have been calls for suspending Iranian participation in the hajj. Esfanani said that Iran should have first cut diplomatic ties in September after a stampede in the Saudi city of Mina killed 461 Iranian pilgrims. According to Saudi officials, only 769 people total were killed, but according to The Associated Press, over 2,400 people died. Ohadi said that after the stampede, 79 Iranians were buried in Mecca, but that the families of 37 of those buried there requested that their bodies be returned to Iran. So far, Saudi Arabia has returned 10 of the bodies.

Saudi Arabia’s decision to cut ties with its regional rival Iran came after protesters stormed the Saudi Embassy in Tehran in reaction to the execution of Shiite activist Nimr al-Nimr. While Iranian officials have condemned the attack on the Saudi Embassy and arrested over 40 individuals involved, Saudi Foreign Minister Adel al-Jubeir announced that Saudi Arabia will cut all air traffic and commercial ties between the countries and that Saudi citizens will be barred from traveling to Iran.

Jubeir, however, added that Iranian pilgrims will still be welcome to travel to Mecca and Medina. Iranians wishing to do so will presumably have to pay the additional cost of flying to the United Arab Emirates first rather than flying directly to Saudi Arabia. Ohadi said that despite Jubeir’s comments that Iranian pilgrims are still welcomed, he still has not heard anything from the Saudis' hajj organization office.

The year 2015 was a tragic year for Iranian pilgrims. In addition to the Jeddah airport attack and the Mina stampede, on Sept. 14 a crane crash killed over 100 people, eight of them Iranian, including a top scientist.

The last time Iran and Saudi Arabia suspended diplomatic ties was in 1987, when Iranian protesters on the hajj clashed with Saudi security. Saudi Arabia drastically reduced the number of permitted pilgrims, causing Iran to suspend hajj travel for three years. It was not until 1991 that relations were resumed and Iranian pilgrims were allowed to return in their previous numbers.