Why was hajj for Iranian pilgrims canceled this year?

After failing to resolve differences with Saudi Arabia, Iranians will be unable to attend the hajj pilgrimage this year. 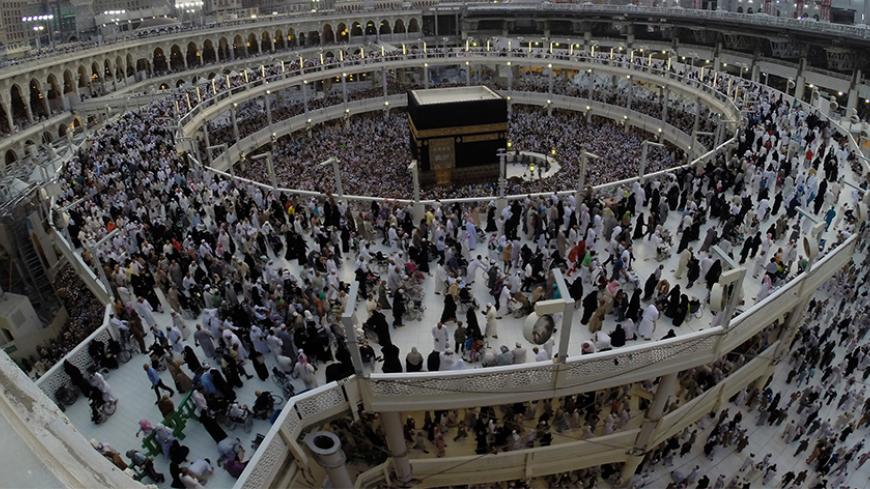 Muslim pilgrims pray around the holy Kaaba during their final circling at the Grand Mosque during the annual hajj pilgrimage in Mecca, Oct. 6, 2014. - REUTERS/Muhammad Hamed
Arash Karami
@@thekarami
May 31, 2016

After last-minute negotiations, Iran and Saudi Arabia failed to provide a breakthrough for Iranian pilgrims to attend the hajj pilgrimage, which is mandatory for all able Muslims. Saeed Ohadi, head of Iran’s Hajj and Pilgrimage Organization, accused Saudi Arabia of imposing new “domineering” conditions for Iran’s participation.

Iranian officials had previously publicly discussed two of the conditions that were causing friction between Iran and Saudi for the participation of Iranian pilgrims to the holy sites in Saudi Arabia: a ban on Iranian planes and a requirement for Iranians to travel to a third country for a visa. Saudi Arabia cut ties with Iran after its Tehran embassy was attacked in January in response to the execution of a prominent Shiite cleric.

During a May 30 news conference, Ohadi said that it took three hours of negotiations for Saudi Arabia to agree to allow Iranian pilgrims to use Iranian planes for travel. On the issue of visas, Ohadi said Saudi’s hajj officials, during negotiations in Saudi Arabia, told them to discuss the matter with Saudi Arabia’s Foreign Ministry but did not offer any solutions. Saudi Arabia’s interest section in Iran is in the Swiss Embassy.

In response to recent statements by Saudi officials that they would offer Iranian pilgrims electronic visas, Ohadi said that this agreement took “seven to eight hours” of negotiations and added that the process for inputting all of the information for the hajj was “very complex” and time-consuming.

Ohadi said another issue was that Saudi Arabia did not want Iranian flags at any of the buildings for Iranian pilgrims or on any of the routes used by Iranian pilgrims. Ohadi said flags are the only recognizable signs pilgrims can use on their route to stay together with their compatriots during hajj rituals.

According to Ohadi, Saudi Arabia also applied restrictions on Iranian physicians accompanying the pilgrims and the amount of medicine they would be allowed to bring into the country. He also claimed that Saudis would not allow the use of Iranian tents to offer pilgrims relief during the hajj ritual.

Ohadi also said that Saudi Arabia wanted the names, positions and previous work history of the members of the mission from the supreme leader's office and the hajj organization.

There also was an issue concerning the use of electronic wristbands to help locate Iranian pilgrims, in part in response to the hajj pilgrimage last year in which 474 Iranians were killed in a stampede and many were missing for a long period of time. Ohadi said that there was confusion in the Iranian media over the issue. He said that the wristbands were Iran’s idea but that Saudi Arabia demanded that Saudi officials be in charge of the plan rather than the Iranians.

Another point of contention, which Saudi Arabian Foreign Minister Adel al-Jubeir had publicly addressed, was a ban on Iranians holding any public ceremonies. Referring specifically to Shiite observances, Ohadi questioned why they had become illegal. The Saudi foreign minister on May 29 accused Iran of wanting to hold “protests” during the hajj.

Ohadi also said that since there are no diplomatic relations, Iranians in Saudi Arabia would have no resources to address issues such as lost visas. He added that on previous occasions, a number of Iranians were arrested while on hajj and although they were released shortly afterward without an apology, there is no location for Iranians to address such issues should a similar incident occur.

According to Ohadi, Saudi Arabia’s proposed agreement letter was “one-sided.” Despite claims that the religious pilgrimage is separate from political disagreements between the two countries, Ohadi asked, “Then why was such an agreement [for hajj] sent with delay and limitations?” He concluded, “The issue is that Saudi Arabia was determined to not accept Iranian pilgrims and, by buying time, wanted to block Iranian pilgrims.”

Ohadi said that during all of the negotiations the Saudis did not observe any of the protocols of accepting the Iranian delegation, adding, “If they act this way with an official and political delegation, how they would treat Iranian pilgrims can be easily predicted.”