Why Iraq needs a united Sunni authority to face extremism

Sunnis in Iraq ought to drop their differences and form a united institution, which would also be supported by Shiites, in order to confront religious extremism. 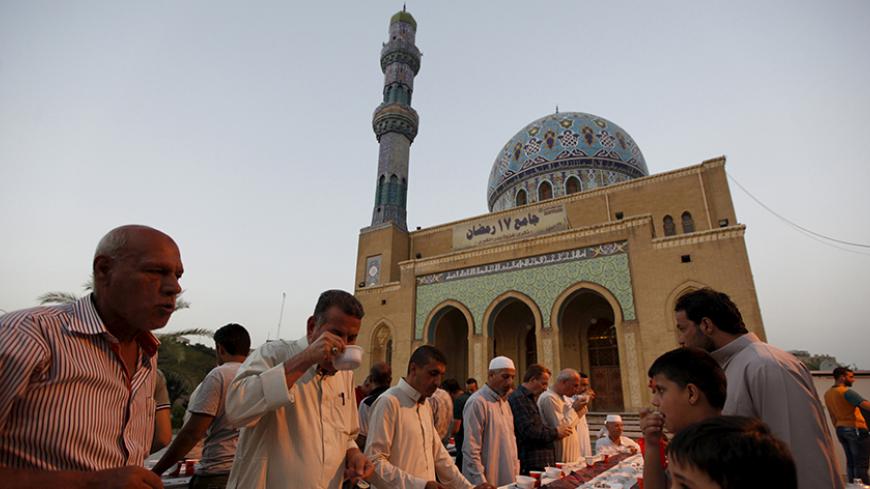 Defeating the Islamic State (IS) and other extremist organizations will take a many-pronged approach requiring the cooperation of the Iraqi government and unity among religious leaders.

It seems evident today that a multidimensional strategy is required — one that considers military, security, political and even economic approaches. Such a strategy should also focus on the intellectual and religious aspects of IS' destructive ideology.

IS gave its leader, Abu Bakr al-Baghdadi, supreme religious power over the world's Sunni Muslims after he declared the rise of the Islamic caliphate on June 29, 2014. Baghdadi gained legitimacy among his partisans by fitting the requirements of a "vilayet." Historically, a Muslim caliph should have Sharia knowledge, descend from the Prophet Muhammad’s tribal lineage — the Qureish tribe — and be sane. Baghdadi is all of this, in addition to having a career rife with jihadism.

IS relies on Islamic religious heritage — though this is debatable — in all its activities, including murder, slaughter, enslavement of women and the burning of detainees alive.

In his most recent voice recording on May 14, Baghdadi used Quranic verses and Islamic religious texts to support his extremist version of Islam, which he summarized as follows: “Dear Muslims, Islam was never a religion of peace. Islam is a religion of combat.”

This radical religious rhetoric coupled with heinous violence was strongly condemned by some Sunni clerics in Iraq and abroad. On April 22, 2014, former Sunni Endowment Diwan head Mahmoud Sumaidaie described IS as an infidel, spiteful group. On Sept. 7, 2014, Iraq’s Sunni Grand Mufti Mahdi al-Sumaidaie issued a fatwa calling to fight IS.

But these intermittent and uncoordinated statements and stances have been unable to penetrate IS' mindset. IS succeeded in building a religious institution with different divisions and a hierarchy linked through several committees to the supreme religious authority represented by the caliph, Baghdadi, who commands obedience.

IS also spreads its religious ideas through educational and pedagogical curricula by extremist clerics and by publishing speeches and ideas of IS leaders on the Internet and social media. It exploits the absence of a moderate and united Sunni authority in Iraq that would be capable of deterring IS' extremist behavior and the Sharia courts in regions under its control or influence.

After the collapse of Saddam Hussein's regime on April 9, 2003, the prevalence of radical armed groups contributed to institutionalizing some extremist notions, such as using jihadism to impose religious control on Islamic communities.

That concept was nurtured by the chaotic state of the telecommunications sector in Iraq that allowed radical satellite channels and websites to broadcast an extremist image of Islam that is unfamiliar to Iraqi Sunni society, which is known for its religious moderation. For instance, Wesal TV, which claims its mission is to reveal the absurdity of the Shiite sect, pitted Sunnis against Shiites.

Yahya al-Kabisi, an Iraqi researcher in political affairs, noted in an article on May 6, 2013, that a state of hostility has prevailed throughout history between Iraq’s Sunnis and the Wahhabi movement, saying, “Sunni Iraq has never witnessed the Salafi Wahhabi trend, except to a very limited extent.”

With the current radical ideological attack on Iraq waged by IS and other extremist groups in neighboring countries, there is a pressing need to form a united Sunni religious authority that can face this escalating expansion. Several factions and religious figures are competing for this position.

Hisham al-Hashimi, a researcher in Islamic Affairs, told Al-Monitor, “The Sunni religious authority in Iraq is loose and unstable due to the different affiliations of scholars, some of whom are Sufis, Salafis, Muslim Brotherhood advocates or followers of the four main Sunni sects [Shafi'i, Hanbali, Hanafi and Maliki]."

According to Hashimi, several groups have tried to establish a supreme Sunni authority over the years. “Those included the Association of Muslim Scholars, the Council of Sunni Scholars, the Iraqi Scholars’ Association, Iraq’s Dar al-Ifta, Sunni Ifta Council and the Fiqh Council of Senior Scholars. But these attempts only widened the rift instead of uniting and organizing Sunnis,” he said.

The deep disagreements between these parties resurfaced recently, after Iraqi Prime Minister Haider al-Abadi announced he would appoint Abdel Latif al-Humaim as acting head of the Sunni Endowment Diwan. Many Sunni parties were competing for the position.

The Sunni Ifta Council urged Abadi to choose Humaim, and prominent Sunni clerics including Ahmad al-Kubeisi, Abdul Razzaq al-Saadi and Rafe’ al-Rifai supported his nomination. On June 24, the Iraqi Scholars’ Fiqh Council — one of the most important Sunni institutions in Iraq — stated it would not accept Humaim's nomination. The council considered the nomination a breach of the Sunni Endowment Diwan’s 2012 Law No. 56, which requires the council's approval to appoint the Diwan’s head. Such disagreements undermine chances of forming a united and strong Sunni authority. Sunni religious institutions and clerics are the ones to blame in these failed attempts.

Iraqi constitutional organizations, including the executive and legislative authorities, must extend their hands to Sunni religious institutions to form a politically and financially independent Sunni authority that enjoys the Sunnis’ respect and distances them from foreign influence. The parliament and government, which are controlled by Shiite parties, must give up their fear of a strong Sunni competitor. Indeed, some Shiite parties and political figures have always been afraid of a united Sunni platform and capitalize on the political and religious Sunni division. Former Iraqi Prime Minister Nouri al-Maliki and some of his Shiite allies were accused of marginalizing the Iraqi National List, which represented Sunnis to a large extent, thus leading to its final disintegration.

Experience has proven that the Iraqi political system will not remedy the situation unless there are strong political and religious Sunni figures who clearly recognize a democratic political process, represent the Sunni people and put an end to the Sunni leadership crisis.