Clerics who issued fatwas against participation in New Year's celebrations come up against a wave of criticism. 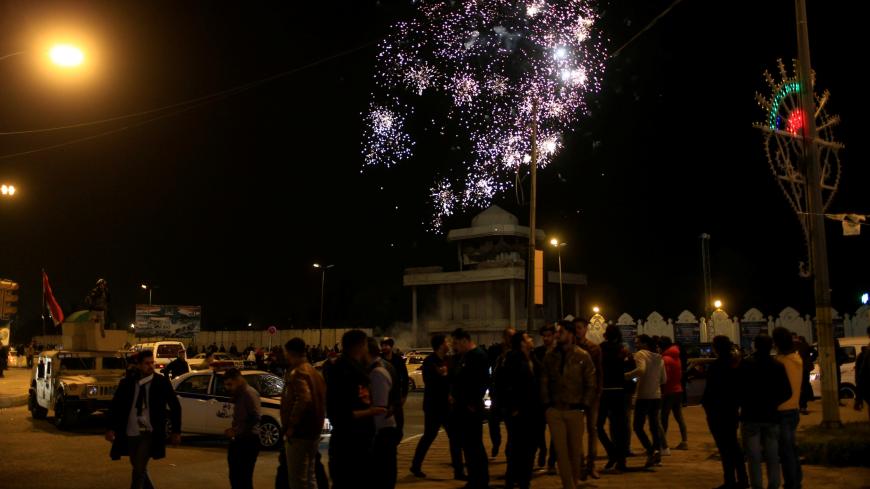 The official Facebook page of “Iraqi Dar al-Iftaa,” the highest Sunni religious authority in the country, quoted him as saying, “It is not permitted to celebrate the New Year or congratulate it or participate in it.” He added, “Participating in their (Christian) celebrations is similar to following their manners [and beliefs], so agreeing with their religious celebrations is agreeing with their infidelity [Kofr]”.

In his lecture, Sumaidaie quoted controversial 14th-century Salafi cleric Ibn Qayyim al-Jawziyya, who issued a fatwa saying, “Congratulating Christians in their celebrations is as same as congratulating them for worshiping their cross and believing in Jesus as son of the God.”

Ibn Qayyim and his teacher Ibn Taymiyyah (1263-1328) are the most respected Muslim scholars for all Salafi movements.

Sumaidaie's fatwa sparked a wave of anger among not only among Iraqi Christians, but among other Iraqi minorities, secular activists and even moderate Muslim clerics.

The Chaldean Catholic Church called the fatwa "false, malicious and far from the correct knowledge of religions."

“Religious clerics must call for brotherhood, tolerance and love, instead of breeding division and rebellion,” the statement reads, adding, “Our people today need our common denominators to be deepened in a way that contributes to coexistence, not expanding hatred.”

The church also demanded that the Iraqi government “take action against these types of speeches and prosecute the promoters, especially when they are issued from official platforms."

The prominent Yazidi organization Yazda also condemned Sumaidaie's fatwa, calling upon Iraqi government to dismiss him from his post. Sumaidaie’s official title is “The republic’s mufti” and it is a public post under the authority of the Iraqi government. Yazda called the fatwa an “unbalanced racist statement” that does not fit with the country's need to establishing tolerance and coexistence among all Iraqis.

Sumaidaie has close ties with the Iraqi government and the Popular Mobilization Units.

But the Iraqi Sunni Endowment, which is under the authority of the prime minister, denounced the fatwa while expressing congratulations to all Christians in Iraq and around the globe for Christmas and New Year's celebrations.

In a separate statement, the head of the Sunni Endowment, Abdullatif al-Humaim, said Sumaidaie's fatwa does not represent the organization and called him an extremist self-styled cleric who only represents a small minority of a Salafi group that not only opposes celebrating Christian events but also criticizes celebration of the Prophet Muhammad. Humaim praised Iraqi Christians for their great contributions in the history of Iraq and human civilization.

The head of the Iraqi Ulama Group, Khalid al-Mulla, who is a prominent Sunni cleric from Basra, issued a fatwa against Sumaidaie's fatwa, calling on Muslims to attend Christian celebrations as part of expressing kindness to them, which God demanded from Muslims.

Mosawi had previously said that non-Muslims have three options: take up jihad alongside Muslims, convert to Islam or agree to pay jizyah — a yearly tax historically levied by Islamic states on Christians and Jews.

Joseph Saliwa, a Christian who formerly served in parliament, referred to figures such as Sumaidaie and Mosawi as “hidden DAESH”; DAESH is the Arabic acronym for the Islamic State (IS). Saliwa said Sumaidaie and Mosawi are potentially more dangerous than IS leader Abu Bakr al-Baghdadi. The former legislator demanded that the Iraqi government cleanse public institutes of such dangerous figures.

According to a survey conducted by the Masarat Organization in early 2018, 42% of hate speech in Iraq comes from clerics. Amina al-Dhahabi, who supervised the research team that conducted the survey, told Al-Monitor, “Statements like Sumaidaie's fatwa had a great role in paving the road for extremist militias such as the Islamic State to penetrate Sunni communities and establish a strong position among them.” She added, “Without such fatwas, no one could persecute Christians and other minorities and expel them from their hometowns.”

The wave of criticism from clerics about participation in New Year's celebrations came after the Council of Ministers announced Dec. 20 that there would be a three-day public holiday from Dec. 30 through Jan. 1. Iraqi Christians have been demanding that the Iraqi government make Christmas a public holiday, but the government announced a New Year's one instead.