The Shiism-Wahhabism conflict is expanding among other Islamic denominations, as several Sunni schools are taking actions against Wahhabism. 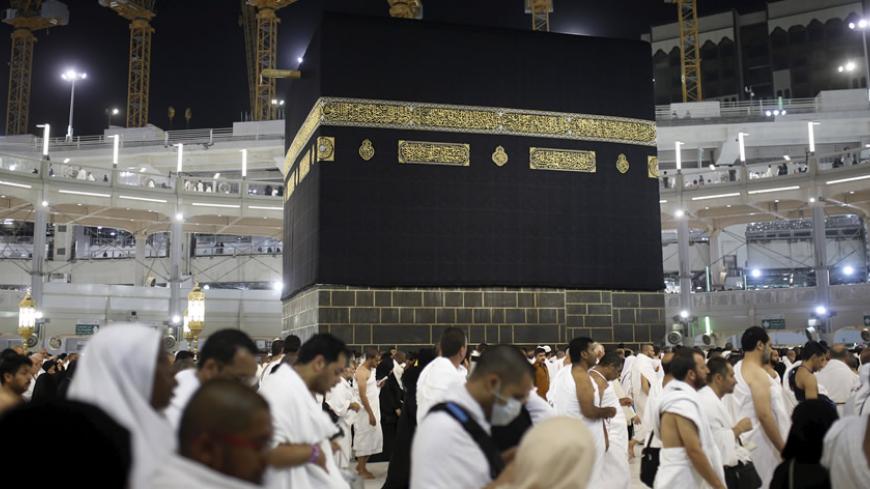 Muslim pilgrims pray around the holy Kaaba at the Grand Mosque on the first day of Eid al-Adha during the annual hajj pilgrimage in Mecca, Sept. 24, 2015. - REUTERS/Ahmad Masood

The religious authority in Saudi Arabia responded aggressively to Iranian Supreme Leader Ayatollah Ali Khamenei’s annual message Sept. 5 in which Khamenei attacked the Saudi government against the backdrop of the disputes between both states that culminated in forbidding Iranian pilgrims from the hajj this year. Iran also accused Saudi Arabia of negligence in managing the hajj, which led to the deaths of more than 760 people and injuries to around 1,000 in 2015.

Sheikh Abdulaziz Al Sheikh, the Saudi grand mufti and head of the Council of Senior Scholars, spoke to Makkah newspaper Sept. 6, saying, “We must understand that those are not Muslims. They are Majus [Zoroastrians], and their enmity to Muslims — specifically to the Sunni community — goes way back.”

Although Sheikh was addressing the Iranian political regime, his choice of words and the context of his response gave the impression that he was targeting Iranian Shiites in general. He used the pronoun “they” in his reply to the message of Khamenei, who is only one of many Iranians. He also focused on Zoroastrianism, the historical religion of Iranians before Islam, and his reference to historical enmity with Sunnis is further proof that the international media got the story right — this was an attack on Iranian Shiites in general.

Such a tone is not new in the Salafi-Wahhabi discourse. It dates back to the old history of Wahhabism in the kingdom continuing to the present time. When Abdul-Aziz bin Baz was grand mufti from 1962-1999, he deemed Shiites apostates on several occasions, including in official fatwas and speeches. Ibn Jibreen, the oldest member of the Council of Senior Scholars when he died around age 76 in 2009, issued several fatwas stating that Shiites are polytheists who have deviated from Islam, saying they “deserve to be killed” if they reveal their beliefs. The council is the highest religious authority in the kingdom. Other fatwas from influential and living clerics in the kingdom such as Sheikh Abdul Rahman al-Barrak called for considering Shiites apostates, secluding them, treating them with hatred and banning humanitarian aid from reaching them.

In a speech before the families of the victims of the hajj stampede on Sept. 7, 2015, Khamenei described the ruling Saudi family as “a cursed malicious tree.” He said that it has deviated from the Muslim world and Islam and has allied with Islam’s enemies who must be deterred and whose aggression on Muslims and Islam must be halted.

The religious divisions were not limited to the political Shiite-Wahhabi conflicts. Internal skirmishes between the different Muslim currents broke out, given the fateful setbacks resulting from the ongoing regional political disputes.

For instance, there are clear sensitivities against Wahhabis from Muslims outside Shiite Islam due to Wahhabis' bad reputation following the rise of radical jihadi currents such as al-Qaeda and the Islamic State (IS) that have adopted Wahhabism as their principal influence.

An Islamic conference was held Aug. 25-27 in Chechnya’s capital, Grozny, and senior Sunni scholars from various Sunni schools attended. The meeting was sponsored by Chechen President Ramzan Kadyrov. The conference aimed at introducing “Sunni identity” and determining its adherents.

The closing statement limited the Sunni community to “Ash’aris, Maturidis by belief, followers of the four jurisprudential schools of Sunnism (Hanafi, Maliki, Shafi'i and Hanbali) and followers of pure Sufism in terms of ethics and chastity. Any other sects are not included in the Sunni community.” This clearly indicates that, in the participants' view, Wahhabism is not considered part of Sunni Islam, but rather an emerging innovation (Bid'ah) in Islam.

The conference provoked Wahhabi scholars and Saudi officials who considered it a conspiracy from kuffār (nonbelievers) against Saudi Arabia, and an attempt to make a coalition between Saudi Arabia's enemies — Shiites and Sufis in particular. The attendance of Ahmed el-Tayeb, the grand imam of Al-Azhar in Cairo, at the conference sparked the anger of many Saudis. Prominent writer Muhammad al-Shaikh tweeted, “Tayeb’s participation at the Grozny conference that dismissed Saudi Arabia from Sunnism will force us to change our behavior with Egypt. Our country is more important, and [President Abdel Fattah al-]Sisi’s Egypt shall go to hell.”

The Shiites' increasing effort to undermine Wahhabism’s influence in managing Islamic affairs is now expanding to other Islamic denominations, including sects within Sunnism. This is especially true given the fact that hatred of Wahhabism is not confined to Shiites, but also includes Sufis, most of whom are Sunni. Wahhabis and their political advocates in Saudi Arabia often express equal hatred for Sufism and Shiism.

Western states recently tightened the noose on Saudi Arabia’s Wahhabi activities after they noticed the role of the associations sponsoring these activities in producing religious radicalism. The French authorities decided Aug. 20 to close down 20 out of 120 mosques affiliated with Salafi groups in France. In Berlin, King Fahd Academy is shutting down because the academy is thought to have played a role in provoking extremism.

The above developments indicate that the region is undergoing extensive religious changes that might largely reduce the presence of Salafi and Wahhabi movements due to internal protests against them in the Muslim world and abroad. In addition, Saudi Arabia’s role has declined, given the drop in its oil influence on the global economy and dwindling US support for the kingdom.