Is Egypt-Saudi love affair on the rocks?

While some in Saudi Arabia are furious after the grand imam of Egypt’s Al-Azhar spoke at a Chechen conference that condemned Riyadh, others argue that ties between the two are stronger than ever. 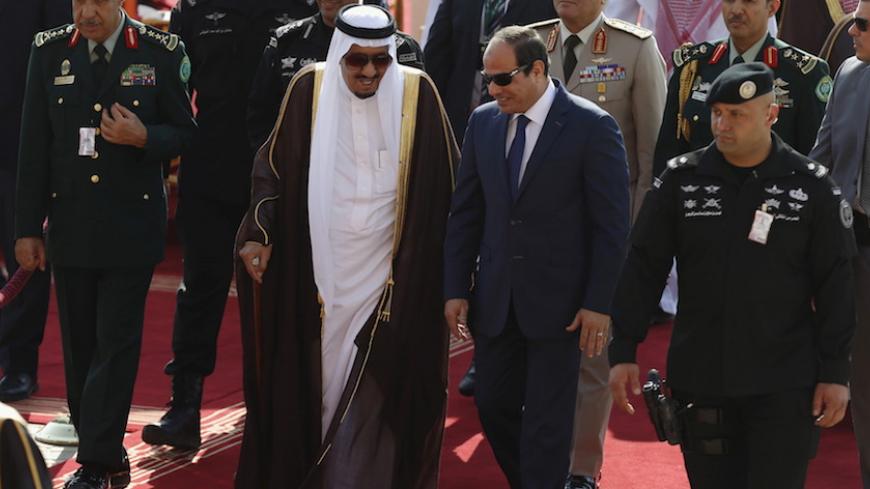 CAIRO — Egypt’s Al-Azhar has tried to distance itself from an Islamic conference held in the Chechen capital late last month, after the forum’s closing statement received sharp criticism for implying that Salafist and Wahhabi groups, which are prominent in Saudi Arabia, were not part of Sunni Islam.

The conference — held in Grozny Aug. 25-27 under the title “Who are the Sunnis?” — was attended by Al-Azhar Grand Imam Ahmed al-Tayeb and a large Egyptian delegation. While Al-Azhar officials have downplayed their role in the conference, the consequences of what happened are still unclear, particularly concerning its impact on relations between Cairo and Riyadh. The latter has been a prominent supporter of Egyptian President Abdel Fattah al-Sisi since the June 30, 2013, revolution.

In statements to the press Sept. 6, Abbas Shoman, the deputy sheikh of Al-Azhar, said the conference had not been sponsored by Al-Azhar, and the institution did not participate in its activities or even its closing statement. According to him, the institution’s role was limited to a speech given by Tayeb at the opening, the content of which has not been subject to criticism. In his view, Shaman said, had the conference organizers relied on Tayeb’s words in their closing statement, they would have avoided this controversy.

Speaking at the opening of the conference Aug. 25, Tayeb said that the “Sunni community” refers to Ash’aris, Maturidis and “people of the hadith” — referring to Salafists. This contradicted the closing statement, which limited the definition of Sunnis to “Ash’aris, Maturidis by belief, followers of the four jurisprudential schools of Sunnis [Hanafi, Maliki, Shafi’i and Hanbali], and followers of pure Sufism in terms of ethics and chastity.”

In the statement, the participants said the conference represented “an important and necessary turning point to straighten the sharp and dangerous deviation that has affected the concept of the Sunni community following attempts by extremists to seize and monopolize this title.” The statement also restricted that major Islamic schools to the old, prestigious institutions of “Al-Azhar University, the University of Al-Quaraouiyine [Fez, Morocco], Al-Zaytoonah University [Tunisia] and Hadramaut University [Yemen],” also making note of the religious institutions in the Russian Federation.

The General Secretariat of the Council of Senior Scholars in Saudi Arabia responded to the conference’s recommendations, warning of what it described as “calls aimed at inciting [division] among the Islamic sects,” saying that such actions divide rather than unite the Islamic community. In a statement released Sept. 2, the council said, “It is neither civil, wise nor prudent to use tragedies and crises [to support] political inclinations or intellectual affiliations.”

Ahmed Karima, a professor of comparative jurisprudence at Al-Azhar University, said the conference was positive on the whole, since it reclaims the term “Sunni community” from extremists who had tried to seize and monopolize the classification. Speaking to Al-Monitor, Karima said Salafists themselves have tried to promote the idea that they are the only real Sunnis, excluding those who adhere to Ash’ari theology, which is adopted by Al-Azhar. “They even went further, deeming us nonbelievers in the Al-Masira Encyclopedia of Contemporary Religions, Sects and Parties [published by the Saudi World Assembly of Muslim Youth],” he added.

Karima noted that, according to Al-Azhar’s curriculum, the term “Sunni” was originally applied to followers of Imam Abu al-Hasan al-Ash’ari, in addition to those following Imam Abu Mansour al-Maturidi. “The Chechnya conference was held to put things back in order, [to clarify that] Sunnis are the Ash’aris,” he added, saying that Al-Azhar’s statement distancing itself from the conference was issued to correct the notion that the conference was based on sectarianism.

Twitter users responded, launching the hashtag #TheSeniorScholarsStatementRepresentsMe, which quickly became one of the top trending hashtags in Saudi Arabia, with more than 10,000 tweets.

Many of those using the hashtag expressed their support for the council’s statement, noting their dismay at the objectives and title of the Chechnya conference. Some described the conference as a Russian message to Saudi Arabia. Meanwhile, other Twitter users called for avoiding conflict and warned against transforming the region’s political crises into doctrinal and sectarian conflicts.

On the other hand, some used the hashtag #ChechnyaConference to praise the meeting and considered it a step in the right direction to fighting terrorism.

Saudi writer and journalist Muhammad al-Shaikh tweeted, “Tayeb’s participation in the Grozny conference … will force us to change our behavior with Egypt. Our country is more important, and Sisi’s Egypt shall go to hell.” In another tweet, he added, “We used to support Sisi because the Brotherhood and the Salafists are enemies for us both, but [Egypt] turned its back on us in Grozny so let it meet its destiny alone.”

Shaikh said it was clear the conference targeted Saudi Arabia, noting that Al-Azhar’s participation required Riyadh to act swiftly and decisively to contain what he described as the “conspirators” at the conference.

For his part, Ali Gomaa, the former grand mufti of Egypt and one of the participants in the delegation accompanying Tayeb to Grozny, has said that Salafism contradicts the “salaf” (an Arabic term meaning “ancestors” and referring to the first three generations of Muslims, after which Salafism took its name) in terms of variance in religious interpretation. Salafism had adopted a single view, he noted in a January television interview, and considers anything contradicting that to be void. He said that this rigid interpretation has given rise to extremist groups, including the Islamic State.

Gomaa, who is known for his frequent attacks on Salafists, said that Salafists only represent about 3% of Muslims, while the vast majority are comprised of Ash’aris.

Said al-Lawendi, an international relations expert at Al-Ahram Center for Political and Strategic Studies, told Al-Monitor that this controversy will not affect the relations between Cairo and Riyadh. Despite what Lawendi described as some “tactical differences” between the two nations on how to deal with certain regional issues, he said that the ties are too strong to be impacted by Tayeb’s participation in the Grozny conference. He also noted that the grand imam attended in his capacity as an imam for the Islamic world as a whole, not just representing Egypt.

Mohamad Sadiq Ismail, the head of the Arab Center for Political and Strategic Studies, agreed with Lawendi, telling Al-Monitor that relations between the two are linked by several factors, including common interests. “Thus, it is hard for relations to [seriously] strain due to a religious matter, despite the latter’s importance in Saudi foreign policy,” he said.

Ismail said that Saudi-Egyptian relations have been stable ever since Sisi came to power following the June 30 Revolution, despite some differences on regional matters such as the Syrian conflict. While Egypt believes that a political solution is the best way to end the crisis, Riyadh supports a military solution.

Ismail said he believes Egyptian-Saudi coordination on the Yemeni crisis is one of the things strengthening ties between the two. Cairo participates in the Saudi-led coalition of Arab forces in Yemen, which is working to restore what it describes as the legitimate government led by President Abed Rabbo Mansour Hadi.