Are Saudis open to rapprochement with Iran?

Despite a war of words between Iran and Saudi Arabia and other tensions, some observers believe relations between Riyadh and Tehran could improve. 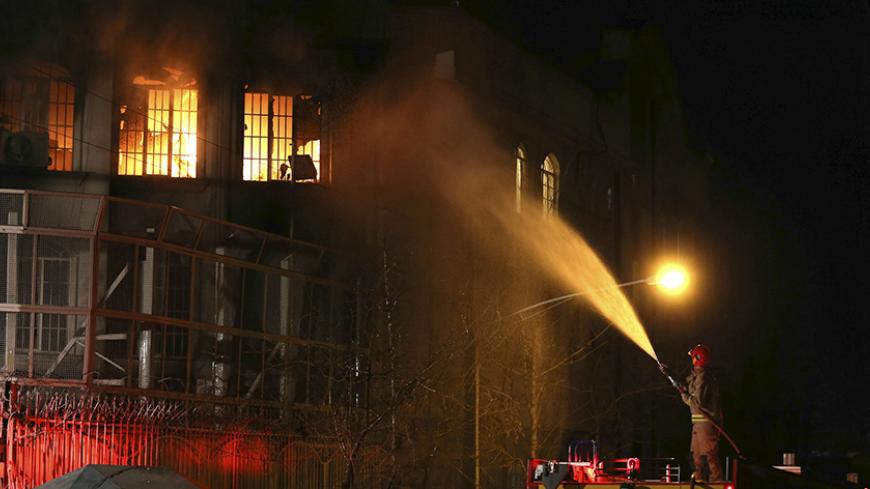 Tehran's firefighters attempt to control a blaze inside Saudi Arabia's embassy after it was stormed by Iranian protesters during a demonstration in Tehran, Jan. 2, 2016. - REUTERS/TIMA/Mehdi Ghasemi/ISNA/File Photo

According to Islamic teachings, the hajj is the annual manifestation of Muslim unity. This is a common theme among Muslim scholars when describing the scene of millions of Muslim worshipers from around the world, all wearing plain white robes and performing the same rituals, despite their ethnic and sectarian differences. This grand, symbolic gesture of Islamic unity seems to be reeling under the effect of politics, in particular the row between the two dominant Islamic states in the Middle East, Saudi Arabia and Iran, which since 2012 appear to be engaged in an undeclared state of regional war.

The two countries opened a new chapter in their already tense relations Sept. 5 when Iran’s supreme leader, Ayatollah Ali Khamenei, launched one of the harshest verbal attacks on the government of Saudi Arabia since being chosen to succeed Ayatollah Ruhollah Khomeini in 1989. In his annual hajj message, Khamenei recalled the stampede during last year’s hajj that led to a reported 2,000 people being killed, among them 472 Iranians.

“The heartless and murderous Saudis locked up the injured with the dead in containers — instead of providing medical treatment and helping them or at least quenching their thirst. They murdered them.” Khamenei called Saudi rulers “disgraced and misguided” and referred to Saudi muftis as “impious and haram eating … who blatantly issue fatwas against the Book and Sunnah.” Khamenei said those who accuse Iran of preventing its citizens from making the hajj are “media minions” of Saudi Arabia and reporting lies. Khamenei added that Muslims should “reconsider the management” of the annual pilgrimage.

“The Saudi-Iranian tension is dangerous and takes the conflict to the edge of the abyss,” said former Saudi diplomat Abdullah Shammari in an interview with Al-Monitor. Shammari, an expert on Iranian and Turkish affairs, accused Tehran of starting the row by interfering in Saudi affairs, referring to Tehran’s reaction to the execution of dissident Saudi Shiite cleric Sheikh Nimr al-Nimr earlier this year. Protesters then attacked Saudi diplomatic compounds in Tehran and Mashhad.

Shammari said, “This led to the severance of diplomatic ties [by Riyadh], and Iran stopped its pilgrims from doing the hajj this year despite the flexibility shown by Saudi officials, but it seems this is serving the agenda of certain lines in Iranian politics.”

In response to Khamenei’s comments, Saudi Arabia’s top cleric, Grand Mufti Abdulaziz Al Sheikh, accused the Iranians of being non-Muslims, because they are descendants of Zoroastrians. “They are the sons of the Magi [Zoroastrians], and their hostility toward Muslims is an old one, especially with the people of the Sunnah [Sunnis],” said the mufti. His comment incited another round of responses, including from Iranian Foreign Minister Mohammad Javad Zarif, who tweeted, “Indeed; no resemblance between Islam of Iranians & most Muslims & bigoted extremism that Wahhabi top cleric and Saudi terror masters preach.”

Al-Monitor has learned that Riyadh sent Tehran a message through unofficial channels clarifying that the grand mufti’s inflammatory comments were not an official position.

“The latest comments by the Saudi mufti should be put into the accompanying context,” Shammari said. “The interview was on the phone, and it reflects an angry personal point of view after the Iranian supreme leader’s message that crossed all red lines.” He added, “The comments are personal and political and can’t be regarded as a religious fatwa.”

The hajj is only one of several points of conflict between Iran and Saudi Arabia, which are already on opposite sides in several battles around the region. In Yemen, Saudi Arabia is fighting alongside the government of President Abed Rabbo Mansour Hadi against Iranian-backed Houthi rebels, while in Syria, Iran is fighting alongside the government of President Bashar al-Assad against rebels backed by Saudi Arabia among other powers.

“The [Iranian supreme] leader’s hajj message was linked to regional issues too,” Tehran University professor Mohammad Marandi told Al-Monitor. He explained that the message was also related to the “constant bombardment of civilian targets in Yemen, the support for Wahhabi extremists in Syria and Iraq, the subjugation of the people in Bahrain, and also it is linked to the general attitude of the Saudi regime toward non-Wahhabis and the fact that they treat non-Wahhabis as inferior beings.”

That said, Marandi thinks that there might be a chance for rapprochement. He said, “If there is a real change in Saudi policies, then it is very likely that there will be a change in course, but if not, then the Iranians feel that the Saudis are heading toward instability and perhaps demise. So if the Saudis want to spare themselves of such an end, they have to back off and swallow their pride.”

Shammari, however, expressed pessimism in regard to a significant change in the situation, explaining that the average Saudi knows very well that the Iranian supreme leader is not using his comments to boost his popularity at home, but means what he said. Shammari remarked, “A miracle is needed when the highest [Iranian] authority is using such harsh rhetoric against Riyadh. … Unfortunately, regional and world powers are exploiting this conflict for their interests, while the people of Saudi Arabia and Iran are the ones who will pay the price.”

While it is true that Khamenei’s hajj message was tough, it was not the harshest from an Iranian leader to date. That distinction goes to Ayatollah Khomeini’s 1988 hajj message, which made note of the killing of more than 402 pilgrims in Mecca the preceding year, most of them Iranians. He described the Saudi-Iranian struggle as a war between good and evil and presented the House of Saud as pre-Islamic idolaters. Despite the tough rhetoric of today, there might be cause to believe a change in course between Tehran and Riyadh could occur sooner rather than later.