In order to break the political deadlock resulting from Iraq's recent elections, Shiite leaders gathered to find a solution to forming the next government. 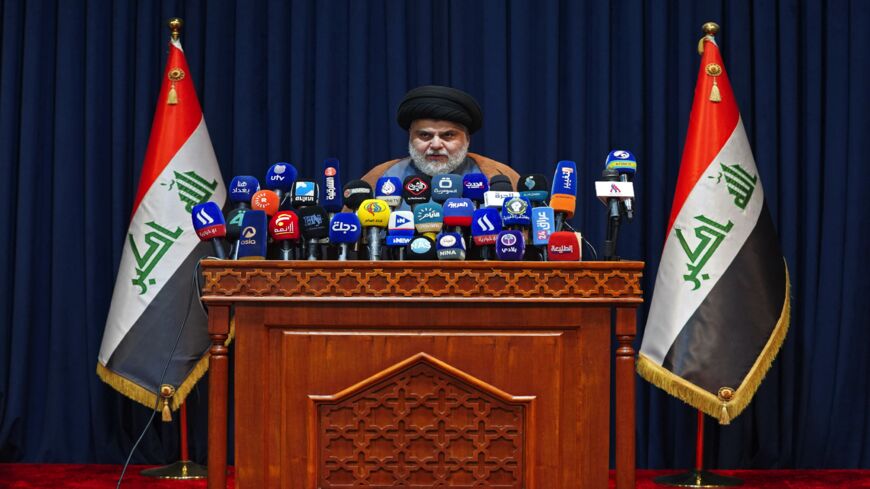 Leaders of Shiite political parties gathered in Baghdad at the home of Fatah Alliance leader Hadi al-Amiri on Dec. 2 to discuss solutions to the country's political deadlock resulting from the Oct. 10 elections.

The election results divided the Shiite political scene into two main camps: the Sadrist movement with 72 seats, and the Coordination Framework (the CR, a coordinative body for a group of Shiite political parties), with 59 seats.

Today’s meeting is the first of its kind, as it includes all Shiite political party leaders under one roof.

It is also historical because it brings together foes and rivals who have not met for over a decade.

Sadr, who traveled from the city of Najaf to attend the meeting, was seated between the State of Law's Maliki and Asaib Ahl al-Haq head Qais Khazali.

Maliki has been in conflict with Sadr since the 2010 elections when Sadr tried to form a coalition against him to prevent a second Maliki term.

Khazali split from the Sadrist movement in July 2006 to form the Asa'ib Ahl al-Haq militia.

Several initiatives arose in the past to bring all Shiite political parties under one entity, but they all failed.

In 2002, the Iraq Shiite Declaration, proposed by Ahmad Chalabi, aimed to unite Iraqi Shiite leaders and form a united view for the future of Iraq. The initiative did not last long due to the competition over political benefits following the fall of the Baath Regime.

Following 2003, there were several attempts to form the Shiite House, a political entity proposed by Chalabi as well to bring all Shiite leaders under one umbrella. This did not last long for the same reason mentioned above.

The CF was another initiative, and Sadr abandoned it last year. It has become mostly an entity for the political parties affiliated with the PMU and related military factions.

Sadr read the CF's call for protests against the election results as an attempt to stop him from forming a majority government according to the electoral merits. The protests eventually turned violent on Nov. 5, leading to two dead and hundreds wounded.

Sadr has reacted vigorously, calling for the complete removal of militias and insisting on a majority government or he will abandon the next government.

After releasing the investigation reports on those two incidents — the violence against the protesters and the assassination attempt — but with no finger-pointing at any specific party, tensions lowered, making way for today’s meeting.

No initiatives are expected to arise from this meeting, as it is only an attempt to break the ice.

But it can be the first step in Shiites reaching an agreement followed by negotiations with Sunnis and Kurds to form the next government.

In order to find a solution, the Prime Minister Mustafa Kadhimi, President Barham Salih and Chief Justice of the Supreme Judicial Council Faiq Zaidan gathered last week to discuss an initiative that has not yet been released to the public.

The series of recent events and the sharp division between the two main Shiite groups indicate clearly that there are miles to go before an agreement is reached on forming the new government.

This is also evident when comparing the statements of the two camps following today's meeting.

The CF's statement focused on protecting the PMU, expelling foreign forces and criminalizing normalization with Israel.

The Sadrists' statement focused twice on the necessity of forming a “national majority government.”

Sadr tweeted immediately after the meeting that “Neither Eastern nor Western, but rather a National Majority Government."

Yet while the meeting between the two Shiite rival groups is an important step toward a political solution, there is a long way toward an agreement between the two parties on the formation of next government.