The Coordination Framework, which became the largest Shiite bloc in the parliament after the withdrawal of Sadrists, have set up a committee to nominate the prime minister as a part of forming the next government. 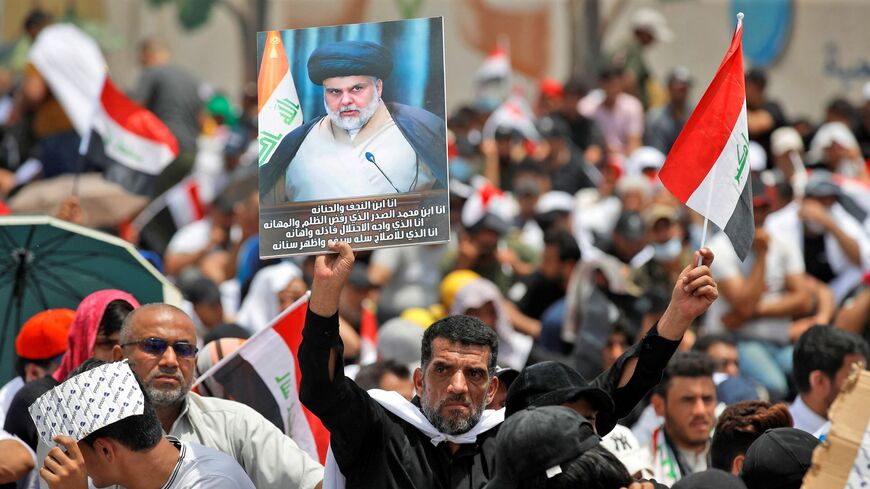 A supporter of Iraqi Shiite cleric Muqtada al-Sadr lifts a placard depicting him during a a collective Friday prayer in Sadr City, east of Baghdad on July 15, 2022, an event called for by the influential leader in an attempt to influence stalled talks on forming a new government. - AHMAD AL-RUBAYE/AFP via Getty Images

The Coordination Framework (CF) of Iran-backed groups and militias gathered July 21, the latest in a series of meetings to discuss forming a new Iraqi government following the withdrawal of the Sadrists.

The committee had presented seven names based on the following criteria: the candidate should be independent, he should be elected among the second generation of post-2003 politicians, he should have a good relationship with the Sadrists, and he should be accepted internally, regionally and internationally.

Following last October's elections, the Sadrists won the largest bloc in the parliament with 74 seats. They had formed an alliance with the Sunni Taqaddum coalition, led by the parliament speaker Muhammad Halbousi, and the Kurdistan Democratic Party led by Masoud Barzani. However, the alliance failed to form the government due to the lack of the two-thirds majority required for electing the president. The CF formed a blocking third in the parliament against the Sadr-Halbousi-Barzani alliance.

Muqtada Sadr ordered his followers to withdraw from the parliament last month, opening the space for the CF. But after a month, the CF is still struggling to form a government, due to sharp differences among themselves.

The formation of the committee was a step forward. The CF had agreed on four names in the meeting. A source from the CF confirmed that three of the candidates are current national security advisor Qasem al-Araji, the president advisor Ali Shokri, the current MP and former minister of human rights Mohamed Shia al-Sudani. The source was not able to name the fourth candidate. However, some reports named Faleh al-Fayyadh the current head of the Popular Mobilization Units.

Some of the CF first level leaders, like the two former prime ministers, Nouri Maliki and Haidar Abadi, were interested in nominating themselves for the position. However, the sharp differences between them led the CF rule that the candidate should not be from the first level leaders. The recent tape leak of inflammatory comments by Maliki also created a serious barrier against him.

Although the meeting yesterday made progress in selecting an official nominee for the PM position, the CF still needs more negotiation to reach the final name.

The source also told Al-Monitor that current PM Mustafa Kadhimi also is on the table and some of the CF members support him.

But even after the committee agrees on a new prime minister, they will need an agreement with the Kurds over selecting the president.

The president has been selected from the Kurds, and from the Patriotic Union of Kurdistan in particular. The current president, Barham Salih, is still the PUK candidate for the position.

However,  the rival Kurdistan Democratic Party had nominated Kurdistan interior minister Riber Ahmed for the position. If the two rival Kurdish parties do not agree on the president, they will have to go to the parliament with their candidates. In this case, Barham Salih has a better chance as the PUK is an ally of the CF.

In any case, the formation of the new government will not move forward unless the political parties agree on the both president and the prime minister. This all indicates that the current deadlock will continue.