In her briefing to the UN Security Council, Jeanine Hennis-Plasschaert confirmed that there is no evidence for election fraud as claimed by some of the political parties that lost the parliamentary elections and warned of dire consequences if crucial reforms are not implemented. 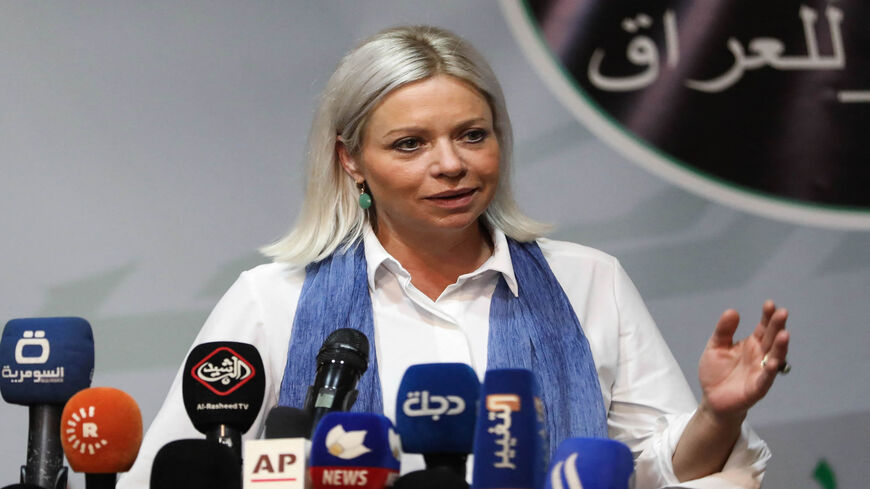 Special Representative of the Secretary-General for the United Nations Assistance Mission for Iraq Jeanine Hennis-Plasschaert speaks during a press conference on the upcoming elections, Baghdad, Iraq, Oct. 5, 2021. - -/AFP via Getty Images

The head of the United Nations Assistance Mission for Iraq, Jeanine Hennis-Plasschaert, assured Security Council members and Iraqi voters Nov. 23 that parliamentary elections were conducted in a fair and free manner.

"The October elections were evaluated as being sound in general," Hennis-Plasschaert said in the briefing, indicating there is no evidence of widespread fraud.

However, she warned of dire consequences if the post-election political deadlock remains and essential reforms are not implemented by the upcoming government.

The political wings of the militias are divided into two main groups: the Fatah Alliance led by Hadi al-Amiri and including several military factions, most predominately Kataib Sayyid al-Shuhada’s Abu Ala al-Waeli and Asaib Ahl al-Haq’s Qais Khazali, and Kataib Hezbollah's Huqooq.

The militias have been protesting in front of two main gates of the Green Zone since the announcement of the results Oct. 12. The protests got violent a few times, resulting in two dead and hundreds of wounded among the security forces and protesters.

An anonymous official told Al-Monitor that the investigation into the incident shows that the first shot was fired by the protesting militias, killing two people and injuring hundreds from both sides.

Immediately after the incident, Muqtada al-Sadr, who at the time was in Baghdad to negotiate with political parties to form the government, immediately returned to Najaf and slammed the militias asking them to hand over their weapons to the state.

A day after the incident, the prime minister's house was attacked by two drones. The initial investigation showed the drones were similar to the ones used by militias who had previously attacked Al-Furat news channel, Sadr himself and Erbil airport.

Moreover, the militias are continuously stating that they will rebel against the government if they are not included in the negotiations.

Kataib Hezbollah media reported that the head of the militia had told Hennis-Plasschaert in her meeting with the Coordination Framework, “We all will benefit or no one will.”

On Nov. 19, Hennis-Plasschaert had met with the members of the Coordination Framework at Hakim’s home to hear their objections and to give them a chance to present their evidence in order to back their claims of election fraud.

The militias' media claimed that Hennis-Plasschaert vowed to voice their complaints before the UN and the Security Council. However, what she has reported in her recent briefing shows nothing supporting such claims. She instead reaffirmed "as stated by the Iraqi judiciary, there is no evidence of systemic fraud."

In a hint to the framework members, she also noted, “While losing seats can be difficult to digest, it is important for any party in any democracy to examine the reasons and to learn for future elections.”

The above statements indicate that the evidence presented by the framework was insufficient to prove widespread fraud.

In a statement released by the Independent High Electoral commission, it announced that after manual recounting of the Baghdad and Ninevah ballot boxes, the results were identical and no change in the results was required.

It is expected that the federal court approves the results next week, and no changes are expected to happen.

This will put the militias between a rock and a hard place, as they either should accept the results and remain outside of the government or escalate the protests to confront Sadr who has a military faction as well.

As Hennis-Plasschaert predicted in her briefing, if the militias and Sadr choose to confront each other using military force, this would spiral Iraq into an “intolerable” situation.