The Iraqi Independent High Electoral Commission announced the final results of the Oct. 10 elections and will now send its results to the Federal Supreme Court for approval. 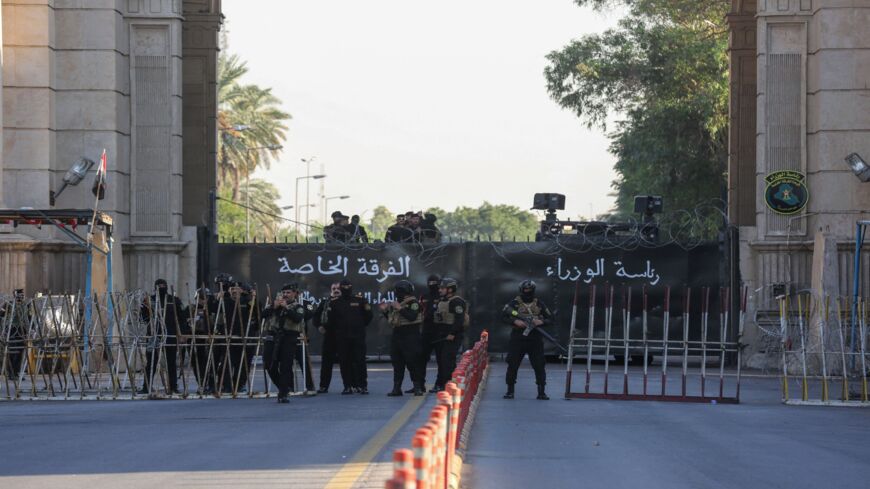 Members of Iraqi security stand guard as supporters of the Hashid al-Shaabi paramilitary network march toward one of the Green Zone entrances in the capital, Baghdad, on Nov. 6, 2021, in a new protest against last month's election results. - AHMAD AL-RUBAYE/AFP via Getty Images

Baghdad — The Iraqi Independent High Electoral Commission (IHEC) headed by Judge Jalil Adnan Khalaf held a press conference on Nov. 30 to announce the final election results after it processed all appeals raised by some candidates and political parties.

The IHEC announced a record low turnout in the early elections, with 44% of eligible voters going to the polls.

“The number of voters is 9 million, representing 44% of the electorate,” Khalaf announced, adding that out of the ballots casted, 720,979 votes were deemed invalid, which is about 8% of the total votes.

The low turnout came as a surprise since in 2019 many Iraqis protested and called for early elections in hopes of making a change to the political system that was installed after the fall of Saddam Hussein’s regime.

The announcement of the results came after the IHEC stated on Nov. 25 that the manual recounting of the Ninevah and Baghdad ballot boxes, which was requested by the losing parties, was completed with no changes made.

However, the judicial committee in charge of overseeing the electoral process has canceled some of the votes due to technical issues which resulted in a few changes in the final results.

The final results almost remained the same, with few changes affecting five seats in the provinces of Baghdad, Ninevah, Erbil, Kirkuk and Basra. There will be no drastic changes despite militias objecting to the initial results and pressuring the government to alter the results in their favor.

Following the release of the initial election results, members of militias such as Kataib Sayyid al-Shuhada, Asaib Ahl al-Haq and Kataib Hezbollah gathered in front of two gates of the Green Zone, where most government buildings and embassies are located.

After a few days of camping outside of the Green Zone, the protests turned violent on Nov. 5 when protestors began throwing rocks at anti-riot forces, which eventually resulted in two dead protesters and many injuries on both sides.

The following day, leaders of militias gathered among the protestors in front of the gates of the Green Zone and held a funeral for the two dead protesters.

The continuous tensions between government forces and militias worsened when on Nov. 7 two drones struck Kadhimi’s residence in Baghdad.

Although a special investigative committee did not hold any single party responsible for the assassination attempt on Kadhimi’s life, many did not hesitate to point fingers at the militias as the new evidence came to light.

Though the militias slammed the elections as fraudulent and rigged, Iraq's elections were praised by the international community. Special Representative of the UN Mission in Iraq Jeanine Hennis-Plasschaert also confirmed the lack of evidence for widespread election fraud.

Even Iran praised the integrity of the elections, which was a huge embarrassment for the Iraqi militias who claim to be part of Iran’s resistance axis.

Moving forward, the militias have two options: They can resume their protests and escalate tensions with Muqtada al-Sadr, which will take the country into another civil war. Or they can accept the election results and form an opposition bloc as a shadow government in order to criticize the incoming government.

In response to the final results, Sadr tweeted his thanks to the electoral commission.

The country now awaits certification of the election results by the Iraqi Federal Supreme Court. Current Iraqi President Barham Salih will then call for a parliament session within 15 days, and a new speaker will be elected.