As some Popular Mobilization Units prepare to comply with the prime minister’s recent decree incorporating them into other national security forces, the Shiite-led, non-local PMU seem to have the final say for now over who enters this Iraqi border city and who crosses into and out of Syria. 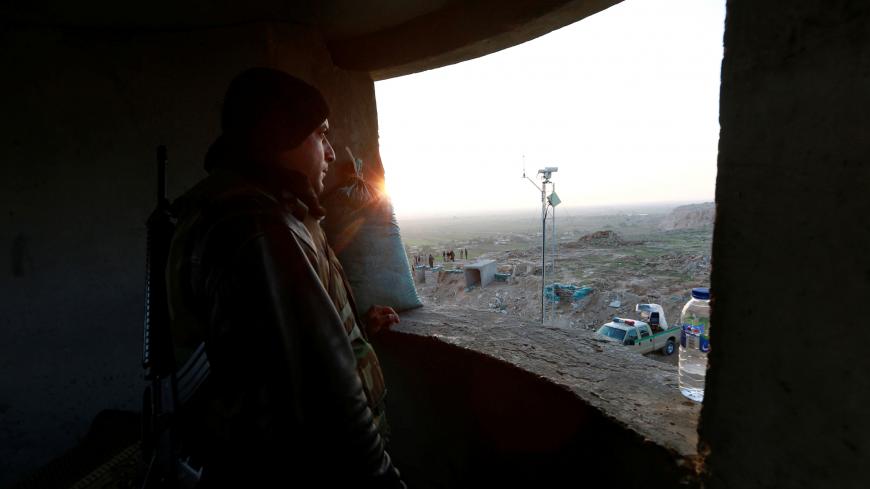 QAIM, Iraq — Abu Sajjad’s desk is flanked by the Iraqi flag, the official Popular Mobilization Units (PMU) flag and that of Kataib al-Imam Ali, the fighting group of which he is the local commander. On the wall is a large map of the two sides of the border, which he and his men cross regularly. Wearing a T-shirt with the logo of the 1980s American film "Top Gun," Abu Sajjad’s muscular tattooed arms gesture as he talks animatedly about differences between Syria and Iraq, how the United States and Israel are trying to interfere in the country, and how the prime minister’s July 1 decree that the PMU be incorporated into other state security forces is good.

"We are men of the state, and we follow the law," he told Al-Monitor.

"The situation is stable here now. There is a bit of movement" of terrorist groups, he said, adding, "and the Islamic State (IS) is everywhere, but they are 'sleeping.'" He said, "Thanks be to God, the army, the police and SWAT are all here in the border area."

Civilians have repeatedly complained to Al-Monitor during several visits to the area since its liberation from Islamic State control in November 2017 about the dizzying array of security forces, some of whom do not wear insignia of any sort but carry weapons.

Abu Sajjad (a Kunya/nom de guerre) said in an interview in his office in the Husaybeh area of Qaim — which is very close to the border and almost across the street from the police headquarters — that Kataib al-Imam Ali now has "about 200 men" deployed in Albu Kamal in Syria, and they move back and forth across the border regularly.

"Here I can go out in the evening alone, dressed like this, whatever," he said, illustrating the difference between the two sides. He added, "There I need to go out with protection, in a military vehicle. And the Iranians don’t want any photos taken of anything."

Abu Sajjad referred to all the men around as his "brothers" and this correspondent as "sister."

Security is good in Qaim, with roadwork underway and services gradually improving.

Concern, however, remains that apparent dominance of the Iran-linked non-local forces and their continuing cross-border activities may lead to future problems.

The Sunni Anbar province has long been wary of if not hostile to the Shiite-led, non-local PMU presence. 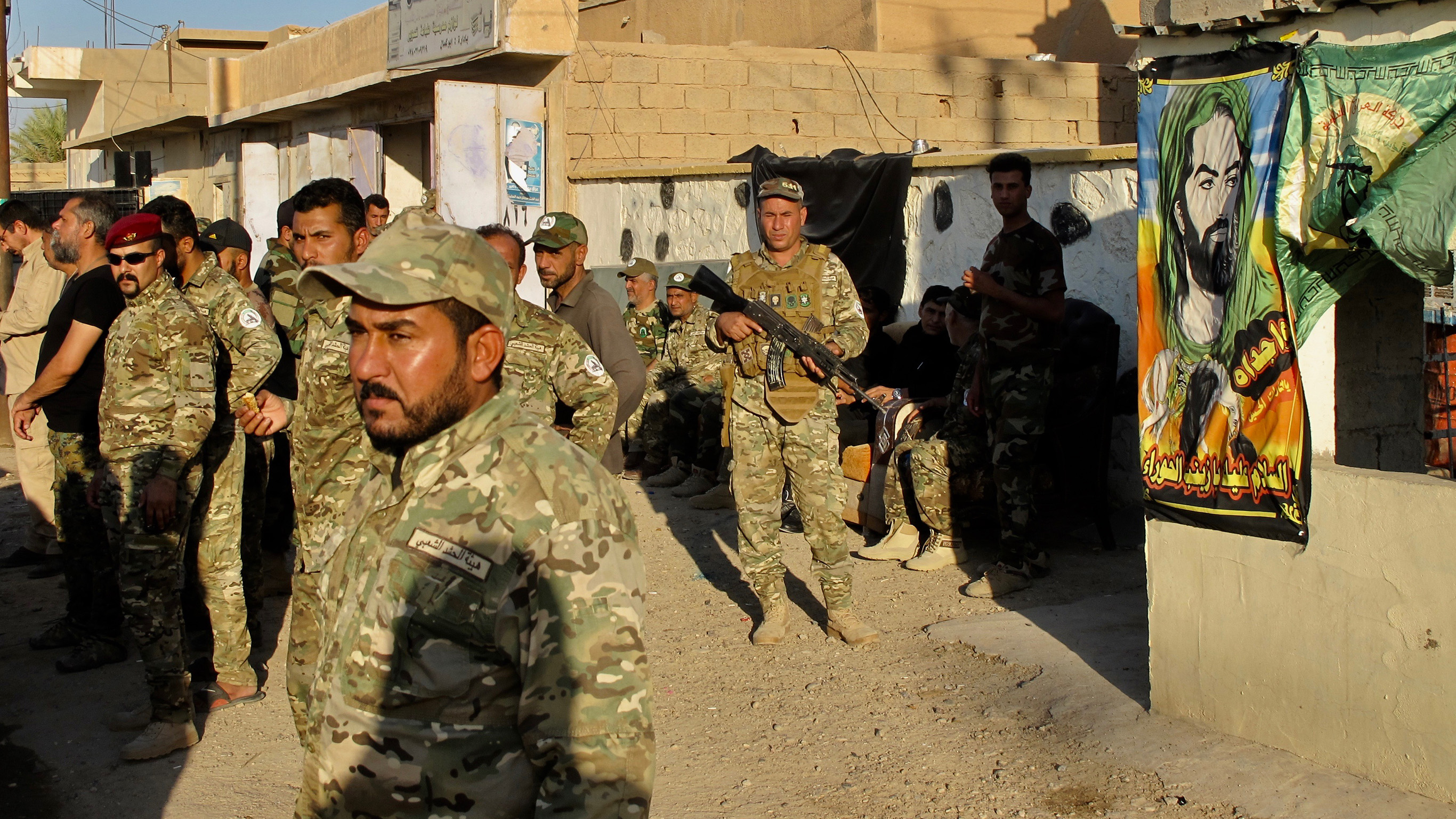 Members of non-local PMU are seen near the Iraqi-Syrian border in Qaim, Iraq, July 7, 2019. (Shelly Kittleson/Al-Monitor)

Anbar encompasses roughly a third of the country but is less populated than many of the poor, job-hungry areas of the Shia south and crowded areas of Baghdad, which many PMU fighters are from. Outside of the fertile Euphrates River Valley are the desert and wadis in which insurgent groups have long found it relatively easy to hide.

The US-led international coalition and Iraqi air power are often used to conduct strikes on IS hideouts there, following tip-offs from local sources and surveillance.

Local security forces including the SWAT team, the police and local PMU now seem more accepting of non-local PMU presence than some months ago when discussing them online and in the presence of others.

This may, however, simply be pragmatic resignation. When alone with some in Qaim, Al-Monitor was told once again that the non-local PMU presence is a problem but nothing can be done.

One man said he is trying to find a way to leave because "Qaim is theirs now; they have control."

Another told Al-Monitor he could not meet with her there "given the situation."

Anbar military operations commander Mahmoud al-Falahi has recently been arrested for allegedly providing the coordinates of non-local PMU to a CIA agent for the purposes of bombing them. Recordings of what is allegedly his voice were released by Kataeb Hezbollah.

Abu Aya, former head of the Qaim SWAT team and now commander of the local PMU Kataeb al-Hamza, told Al-Monitor he seriously doubted the recordings were real and an officer of that rank would not be "that stupid."

After being asked whether any smuggling was continuing in this area, Abu Aya replied, "They don’t need to anymore. The border is open. You can see that."

On the country across the border, the Kataib al-Imam Ali commander said his group has "no contact with the Syrian regime’’ since it is a "Baathist regime, like Saddam [Hussein]'s."

"We are of course in contact with Iranian forces and our brothers in the Muqawama (resistance) he added.

Men in variegated camouflage attire lacking identifying insignia and guns slung over a shoulder can be seen on the main street of Qaim amid vegetable sellers, Zain phone company shops and money changers with large Qi signs on them, referring to debit cards that are being used by the government to send salaries to official PMU fighters.

SWAT members with this correspondent when she saw a group of three young armed men walking near the market said they did not know who the men were, but "they are probably Kataib Hezbollah. There are a lot of them here."

The concern that armed men may be able to disguise themselves and infiltrate the city was voiced by some of the security forces.

For now, non-local PMU control access from the east.

At a checkpoint just before entering the city, a soldier from the army looked at this correspondent’s Joint Operations Command authorization before pointing some meters down the road toward the PMU checkpoint and saying they would need to approve it.

The fighters from the Tufuf Brigade stationed there required that a commander from the non-local, Shia-led PMU approve the request. Phone calls ensued and about an hour was spent before contacts vouched for this correspondent.

Though Asaib Ahl al-Haq flags no longer fly from a major bridge — as they did to the dismay of many local inhabitants for weeks after the battle to retake the city — and insignia of the various individual PMU factions is seen even less, the influence of the various groups seems to have grown stronger over the past year and a half.

The prime minister’s decree is unlikely to change this. It may, however, render less transparent where specific units of the security forces are from and whether they have longstanding ties or informal alliances with Iran.