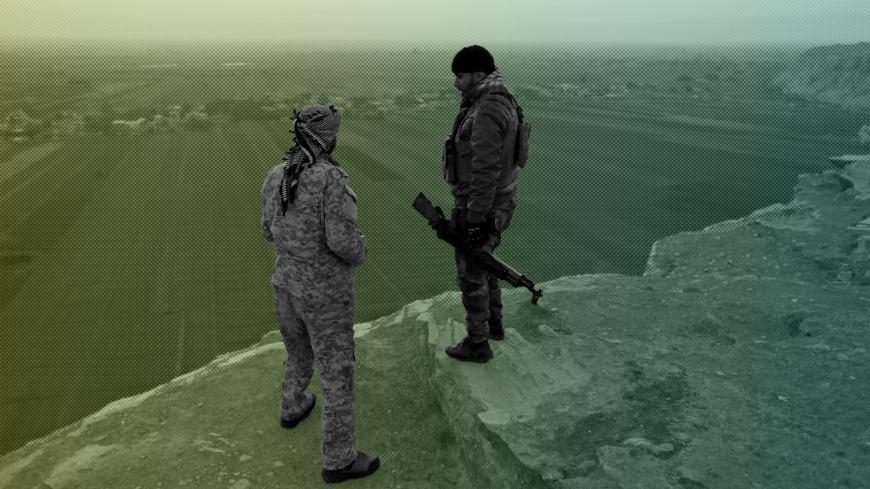 Fighters from the Popular Mobilization Units stand on a hill at the Iraqi-Syrian border near Qaim, Iraq, Nov. 25, 2018. - REUTERS/Alaa al-Marjani

QAIM, Iraq — A fighter from the Kataib al-Imam Ali holds up a photo of himself from his time as a competitive weightlifter, thick veins protruding from his muscular and oiled body. Another fighter scrolls through photos of his young children. Yet another fighter amicably but unexpectedly shoves his phone in front of this correspondent while he is on a Skype call with a friend who is at the shrine of Sayyida Zeinab in Damascus.

The Kataib al-Imam Ali is a nonlocal force within the Popular Mobilization Units (PMU). It has been criticized in previous years for its brutal methods. In early April, fighters from the brigade crossed into the area of Husaybah in the Sunni-majority Iraqi border city of Qaim to speak to Al-Monitor.

Husaybah is near the brigade's headquarters in the Syrian regime-controlled town of al-Bukamal, where regiment commander Qaysar "Abu Sajjad" said they "watch over civilians' souls at night."

Many of the brigade's fighters are from the Shiite-majority south of Baghdad, and fought against US troops after the 2003 invasion alongside Muqtada al-Sadr's Jaish al-Mahdi. Billboards throughout Iraq, including one at a major intersection near the busy Nahdha garage in Baghdad, extol the group's "fighting prowess."

Kataib al-Imam Ali is widely believed to be controlled and funded by Iran.

Abu Sajjad told Al-Monitor that the PMU get "our salaries from the PMU committee. No one else. And the PMU get them from the [Iraqi] Defense Ministry."

The group denied reports of a recent clash between Kataib al-Imam Ali and Mosul police.

Abu Sajjad said the group had been involved in operations against opposition-held areas in Syria since 2015. He said he has fought alongside forces answering to the Syrian government troops as well as its allies in Damascus, Aleppo, Palmyra and Homs.

Hundreds of thousands of civilians have died in the Syrian conflict since 2011. Many of the deaths have been attributed to foreign militias backed by Iran, including Iraqi ones.

Abu Sajjad said that the Syrian army is weak because of rampant corruption and low wages, noting that al-Bukamal is a strategic point and that "we are 37 kilometers inside Syria for the protection of Iraq."

He claimed that there are 500 fighters from Kataib al-Imam Ali stationed in Syria and 4,500 total in the PMU.

He railed against the "1,500 Islamic State (IS) fighters trained by the United States in the Syrian desert" in Tanf, on the border between Syria, Iraq and Jordan. A Free Syrian Army contingent remains there, made up largely of local fighters from Deir ez-Zor.

Abu Sajjad said that the 40,000 inhabitants of the Rukban camp — mostly women and children — are all terrorists.

One fighter scrolls through his phone to a blurry video of nighttime clashes. "These were IS fighters and they were very close," he said. "But don't worry, it's safe now."

Most of the fighters wore the simple olive-green attire that Iran-linked PMU have become known for, while Abu Sajjad's son, 15, wore desert fatigues. Abu Sajjad said he had vowed to teach his son what "jihad actually means" when the boy performed poorly at school. 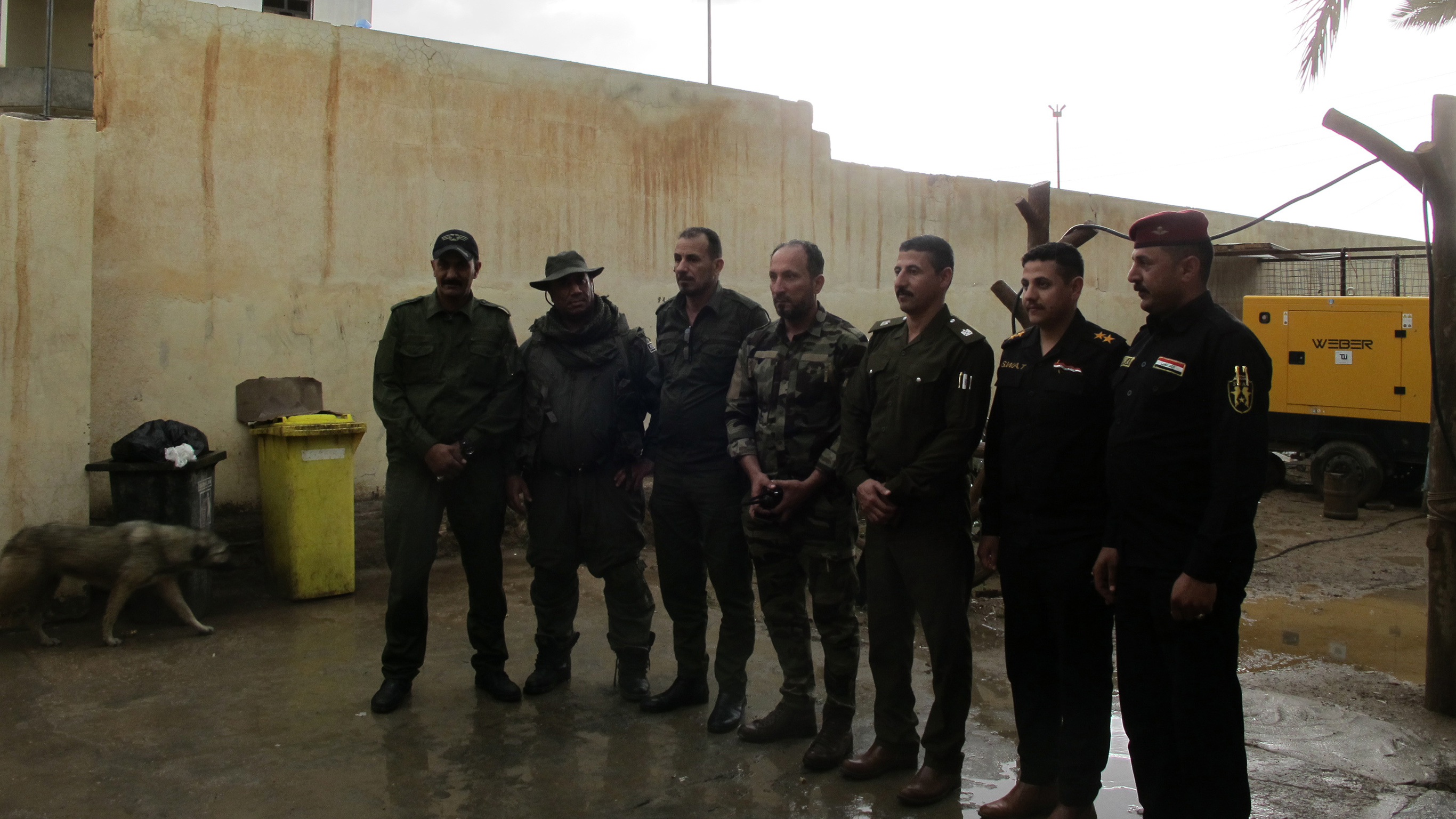 Abu Sajjad angrily repeated several times throughout the interview that America and Israel "want to destroy Islam," a view frequently espoused by both Shiite and Sunni jihadist groups.

In Husaybah, airstrikes carried out by the anti-IS international coalition could be heard in early April. The airstrikes targets IS holdouts in Syria.

In September 2018, Danish special forces pulled out of the Iraqi-Syrian border area. The French artillery — which had been deployed since 2016 — announced in early April 2019 they would soon be following suit.

Local Iraqi police and SWAT teams, many of whom have long told Al-Monitor that the nonlocal PMU must leave, seem to be warier of speaking about them now, amid a reduction in the "post-IS" international coalition presence.

Al-Monitor spoke to members of the local forces who are trying to determine which nonlocal PMU to coordinate with. "We need them here for security," said one. "The Iraqi army and police are not enough."

"As you can see," he said, "it's calm here now. That is important. We need security and electricity and our kids in school."

However, another said that civilians are frightened of the Shiite-led "PMU from the south."

A longstanding source in a local PMU told Al-Monitor that Kataib al-Imam Ali is involved in sheep smuggling to Iraq and fuel smuggling to Syria, which is particularly lucrative after recent reductions in subsidies in regime-held Syria.

He said Kataib al-Imam Ali is known to be "involved in the counterfeit dollar trade" and that this negatively affects local shops and traders.

Other members of the security forces said, "There is no difference between the PMU from the south and IS," due to a shared ideology of jihad and attaining control of territory.

Meanwhile, rumors circulated of an impending operation by the coalition and the Syrian Democratic Forces (SDF) into al-Bukamal. Yet this seems unlikely.

Commenting on the situation across the border in Syria, north of the Euphrates River, Col. James Rawlinson, spokesman for the anti-IS taskforce, told Al-Monitor in an email exchange, "The SDF have begun conducting clearance operations to find and remove any remaining Daesh [IS] presence with Coalition support. Once the clearing operations have concluded, we will continue to enable security forces [to] contain local Daesh threats to prevent their resurgence. … Due to operational security, we won’t discuss specific future operations."