Activists continue to be killed in Basra

The killing of an Iraqi activist in Bara took place even as Iraqi Prime Minister Mustafa al-Kadhimi was visiting Washington; it was just the latest in a series of violent attacks against protesters and others in the southern city. 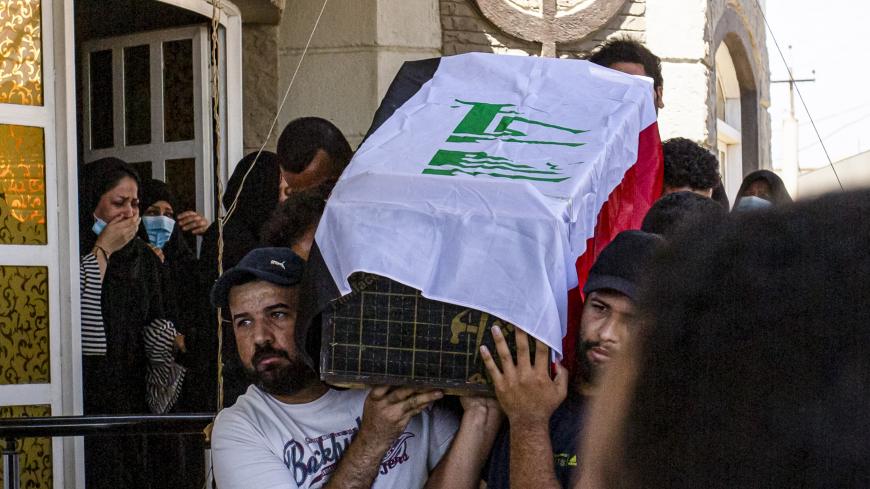 Mourners carry the Iraqi-flag draped coffin of slain activist Dr. Riham Yacoub during her funeral in the center of Iraq's southern city of Basra on Aug. 20, 2020. - HUSSEIN FALEH/AFP via Getty Images

As the US-Iraq Strategic Dialogue continued with Iraqi Prime Minister Mustafa al-Kadhimi’s visit to Washington, yet another activist was gunned down in her car Aug. 19 in southern Iraq.

A few days before, another female activist and others narrowly escaped an attempt on their lives. A friend of both women had been killed Aug. 14, sparking protests.

Killings and abductions have been a constant for years in Basra, Iraq’s second-largest city and driving force behind its economy due to its oil industry and port. But many suspect that persistent accusations of US support for protests that led to the resignation of the previous prime minister late last year and that online campaigns to discredit specific activists by implying they are being “paid” by the United States have played a part in the recent killings.

One of the first moves by Kadhimi, sworn in as prime minister in May, had been to arrest members of a little-known Shiite armed group in Basra, Thaar Allah. In June, he ordered a raid of the headquarters of Kataib Hezbollah in southern Baghdad.

In response to the Aug. 14 killing of activist Tahseen Osama and ensuing protests, Kadhimi removed several officials from their positions, including the Basra police chief.

Kadhimi, who is also director of Iraq's National Intelligence Service, has been accused by Iran-linked groups of passing on information to the United States leading to the Jan. 3 killing by US drone strike of Iranian Maj. Gen. Qasem Solaimani and Kataib Hezbollah commander Abu Mahdi al-Muhandis.

Basra native Riham Yacoub, a doctor known both for her role in women’s empowerment activities and for rallying protesters to demand better services, was shot and killed Aug. 19. Both the United States and the European Union have since issued statements against the “escalation of violence against Iraqi civil society activists.”

Later on, 18 other embassies in Iraq, including those of Australia, Belgium, Canada, France, Germany, Italy, Spain, Sweden and the United Kingdom, condemned the series of killings in a joint statement.

Hanaa Edwar, head of the Iraqi Al-Amal Association and co-founder of the Iraqi Women’s Network, told Al-Monitor in a phone interview Aug. 21 that Yacoub and many other activists had been threatened after protests in the city in 2018, during which the Iranian Consulate had been set on fire, and that there had been a “huge campaign accusing them of relations with the US Consulate.”

"Many fled from the city afterward — to other Iraqi provinces, Turkey, other countries — but she later returned,’’ Edwar said, saying the online smear campaign had resumed after the latest protests.

“For 17 years Basra has been out of control of the government. The militias are doing this now because the government has been trying to regain control,” she added.

Photos of Yacoub standing next to the US consul general in Basra had previously been used to stoke anger against her, a pattern seen in other abductions and killings, including that of well-known security and counterterrorism expert Hisham al-Hashimi in early July. He had served as adviser to the Iraqi government.

Hashimi’s photo had, prior to his killing, been placed on social media posts claiming he was receiving money from the US government.

Edwar said that Yacoub “wasn’t the first” woman targeted, but that there does seem to be more of a focus on them recently, signaling that “there is no red line anymore for the militias as concerns women.”

Yacoub was from an “important family in Basra, and so we are hoping that this will help” to prevent any “cover-up,” she said.

“The results of an investigation into the killing of female human rights activist Suad al-Ali in 2018 were never released,” nor were the perpetrators “ever named in all the other cases of activists and journalists who were clearly targeted for their work. The same thing with Hashimi; we have not been told” who the suspects might be, she said, “though clearly the militias were involved in so many of these cases.”

This journalist reported from Basra during the protests late last year, amid repeated internet shutdowns and widespread fear among the population due to what were widely held to be deflated death tolls of protesters killed. Two brothers of one man killed in Basra said they had relatives who had fought with Iran-linked factions in both Syria and Iraq. Some of these relatives had been killed, they said, fighting against IS with these factions. Nonetheless, their brother had taken part in protests for better services and against these very armed groups.

Ali al-Bayati, head of the Iraqi Independent High Commission for Human Rights, told Al-Monitor in a message Aug. 21 that from October 2019 to mid-June, there had been 53 attempts on the lives of activists and 25 had been killed, while in August alone there had been nine attempts — in Basra, Maysan and Dhi Qar — with two activists killed.

The recent killings seem intended as a warning to Iraqis in general and Kadhimi in particular that anyone seen as amicable toward the United States will be treated as an enemy. The timing — during the Iraq-US Strategic Dialogue, with the prime minister in Washington DC — seems planned for maximum effect.

The Shiite politician and former prime minister candidate Adnan al-Zurfi called Aug. 19 for Iraq’s Counter Terrorism Service to be sent to Basra to restore order. The counterterrorism service is known for having received extensive training and support from the United States and was employed in the June raid of Kataib Hezbollah headquarters in Baghdad.

Zurfi said the spate of killings was tantamount to “a declaration of war against the state” and warned that “these criminals are more dangerous than the Islamic State.”

Edwar said, “We need pressure from the international community on Iraq to cleanse the security forces of unprofessional people whose loyalty is to political parties or armed groups,” adding, “This assassination will most certainly not be the last.”

“We have seen evidence that the security forces have been infiltrated by the militias and this is of serious concern,” she said.

Any call for help from abroad will spark more accusations of connivance with a foreign power. However, many Iraqis seem to see an appeal for outside support as one of few options available to increase rule of law in their own country.