Iraqi protesters brace for more violence in wake of assassinations

The Iraq prime minister has vowed "by the blood of the martyr" to realize justice for activists who have been murdered. 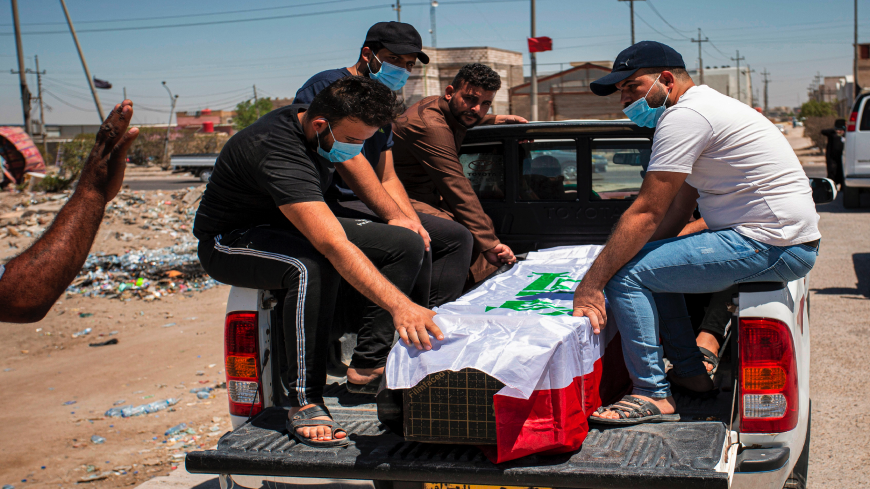 Mourners sit in the back of a vehicle by the Iraqi-flag draped coffin of slain activist Riham Yacoub during her funeral in the center of Iraq's southern city of Basra on Aug. 20, 2020. - Photo by HUSSEIN FALEH/AFP via Getty Images

Violence against protesters in Iraq has been rising sharply in recent days, especially after Iraqi Prime Minister Mustafa al-Kadhimi traveled to Washington for the second round of the country's strategic dialogue with the United States.

Immediately after returning from the United States, Kadhimi traveled to Basra with a number of his ministers to follow up on the rising violence against protesters in the oil-rich southern province.

He visited the family of Riham Yacoub, a female doctor and activist who was assassinated in Basra on Aug. 19.

Kadhimi had made the same promise when he visited the family of murdered Iraqi analyst Hisham al-Hashimi on July. 6. No one has been charged with his killing, nor have the results of any investigation been released.

This rise in the number of assassinations comes in conjunction with dissatisfaction expressed by some Iraqi militias with Kadhimi's trip to the United States and the lack of a timetable for the departure of US troops. Although US President Donald Trump repeated earlier claims that US troops will eventually leave Iraq, those calling for an imminent withdrawal nonetheless criticized Kadhimi, and the militias resumed their attacks inside Iraq.

The Iraqi government's failure to bring the perpetrators of these recent assassinations to justice has led many public figures and groups to call for taking up arms to protect protesters and activists.

Famous Iraqi novelist Ahmed Saadawi, who in 2014 won the International Prize for Arabic Fiction, published a Facebook post on Aug. 20 calling on Iraqi tribes to take up arms to defend protesters, who are being killed in southern provinces.

“O brave warrior tribes! Where are your arms and your courage for your protesting children who are killed in daylight and in cold blood?” Saadawi wrote. “If the government is not undertaking its responsibility to protect the citizens, are you unable to protect your children from these criminal gangs?!”

Omar al-Jammal, a prominent activist, tweeted on Aug. 22, “It is now time to form ‘The Revolution Protection Brigades’ and stop the killers of the October heroes” — referring to those participating in the ongoing protests that started last October. He also posted on his Facebook page: “Take up your arm into your pocket and protect yourself … they had killed Hisham al-Hashimi and Riham Yacoub and many others before you.”

Following the increase in assassinations and the call to take up arms, several tribal men from Muthanna governorate appeared in a video on Aug. 23 holding weapons in their hands, condemning the recent assassinations and declaring their readiness to protect the protesters against the killers.

The current situation is very similar to the Sunni uprising in 2013 before the rise of the Islamic State that took over a third of Iraq in the middle of 2014. The uprising started when groups of civil protesters began demanding their civil rights in Sunni provinces in northern and western Iraq.

At the time, the Shiite religious authority in Najaf expressed full support to the protesters and their legitimate demands, calling upon former Prime Minister Nouri al-Maliki’s government to respond to their demands and avoid using violence against them.

But Maliki's government not only neglected their demands but also suppressed protests by violent methods, leading to hundreds being killed in Hawija in Kirkuk province and other Sunni areas. This came in conjunction with a rise of unidentified gunmen killing activists and public figures in the Sunni areas. These developments gradually led to rising sympathy toward armed groups calling for confrontation with the government forces and unidentified militias. Finally, the expansion of chaos and violence prepared for the quick fall of Sunni areas into the hands of terrorist groups.

The current protests have also been following the same patterns. The civil, peaceful protests that started last year have faced severe violence, and the government turned deaf ears to it despite the support of the religious authority in Najaf. The violence and chaos have been increasing, while the government is unable to impose order and stop the violence, identify the perpetrators and prosecute them.