Activists in Iraq and abroad are seeking to pressure Iraqi authorities into preventing impunity for perpetrators of abuses. 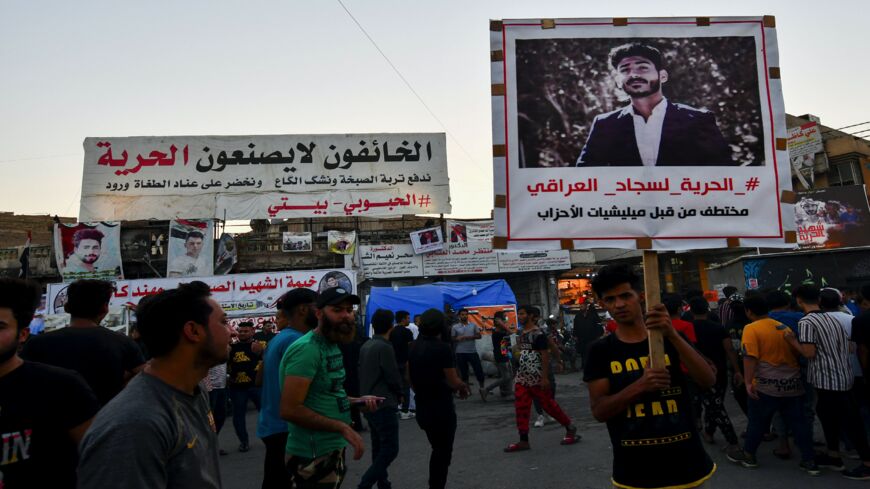 An Iraqi demonstrator carries a portrait of an activist who has been missing for weeks and was allegedly kidnapped, during a gathering in Haboubi Square in the southern city of Nasiriyah on Oct. 24, 2020, on the eve of the one-year anniversary of the anti-government demonstrations. - ASAAD NIAZI/AFP via Getty Images

A prominent Iraqi activist in recent protests, Ali al-Makdam was declared “kidnapped” July 10 and then found dumped on a highway south of Baghdad 36 hours into his disappearance. He was subsequently admitted to the hospital for treatment.

While the party that kidnapped Makdam is unknown at this time, so is the modality, as surveillance cameras have failed to document what happened. Still, his disappearance reenergized a campaign led by a group of Iraqi activists — a campaign that had been ongoing for weeks previous to Makdam's kidnapping — to halt impunity for perpetrators of violations.

The campaign seeks to pressure the Iraqi government into holding accountable the killers of protesters and activists as well as those who committed acts of violence during the military operations to liberate Iraqi cities from the Islamic State years ago.

Maan al-Jizani, a journalist and an activist involved in this campaign, told Al-Monitor, “The campaign to end impunity aims to formulate a direct Iraqi national discourse that attempts to diagnose and summarize the Iraqi problem by linking it to a legal and moral defect that has led impunity to prevail and prosper in Iraq. This led to the spread of corruption, violence and failure within state institutions that were left unable to manage the country properly and effectively."

Jizani added, “It is a voluntary campaign, not a political one, and the volunteers do not aspire to any political role, as their involvement in such efforts stems from a moral and national responsibility that requires Iraqis to have a primary and effective role in helping their country and strengthening their institutions. A prolonged culture of impunity will always keep Iraq and Iraqis in a closed cycle of chaos, violence and corruption. And this is what is actually happening since 2003 until now."

On the Twitter account of the National Campaign to End Impunity in Iraq, activists are focusing on supporting the protests through activities outside of Iraq carried out by a group of Iraqis residing in the United States and Europe in order to help their peers inside the country.

For days, activists in Iraq were left to wonder about the fate of the killers of researcher and security expert Hisham al-Hashimi, who was killed on July 6, 2020, in Baghdad by unidentified gunmen. Activists repeatedly appealed to Iraqi Prime Minister Mustafa al-Kadhimi to hold them accountable.

The Iraqi judiciary’s statement issued on June 8 regarding holding the killers of demonstrators accountable sparked a reaction among activists and human rights defenders in Iraq, as they considered it an attempt by the Iraqi Public Prosecution to evade its duties in curbing cases of impunity across the country. The statement did not include any details, and was viewed as propaganda for the judiciary head.

In less than a year, Iraq’s human rights commission recorded 81 assassinations of activists and journalists since October 1, 2019 — a number unprecedented in Iraq. Yet impunity continues to be the name of the game amid numbers that increase monthly.

Activists and human rights defenders in Iraq are not only focusing on holding accountable the killers of protesters but also all perpetrators of abuses, be they part of the Iraqi government or not. But they often focus on factions in the Popular Mobilization Units whom they accuse of committing abuses against them.

“We activists in public affairs, rights and freedoms are going through a major crisis,” Iraqi protest activist Hamid Jahajih, who has been fighting impunity for more than a decade, told Al-Monitor.

“Ten years ago, we lost many of our colleagues as well as a large number of detainees and individuals who disappeared. While most were subjected to cases of torture, violence and intimidation, a large portion left the country to flee the oppression of armed factions and criminal gangs. Throughout this period, we did not witness any real measures taken by successive governments and security services to pursue and arrest these criminals, achieve justice or establish security,” he said.

During the briefing to the Security Council on May 11, Special Representative of the UN Secretary-General for Iraq Jeanine Hennis-Plasschaert said that “continued impunity for serious crimes and human rights violations such as targeted killings, kidnappings and intimidation can only embolden perpetrators, erode confidence in the state and raise serious concerns in the lead-up to the October elections.”

The absence of laws, the politicization of the security issue and the presence of great political influence within the judicial institution in Iraq are factors that ultimately lead to a widening area of ​​impunity, which in turn helps others commit violations against citizens or against certain groups such as journalists, civil society workers or activists in protests.

On May 9, former British Ambassador to Iraq Stephen Hickey said that “impunity for the killing of activists since October 2019 has only led to more killings. There is an urgent need for concrete measures to hold the perpetrators accountable and protect Iraqi citizens as they prepare for the elections in October.”

According to the International Committee of Journalists, Iraq ranks third in the world after Somalia and Sudan in terms of impunity, which is a serious indicator based on the accountability processes taken for the perpetrators of violations against journalists.

Slogans and banners of the Iraqi protests always contain phrases, chants and calls related to preventing impunity for the perpetrators of violations, but no measures had been taken on the ground until Kadhimi’s government announced on Feb. 15 the arrest of the “death squad” in Basra province.

Asked about the future of accountability in Iraq, activist Hamid Jahajih said, “All killers have escaped punishment, so we believe that the security services and the government are indirectly participating in protecting these gangs, as they fail to pursue them or establish security. I do not think that the government or its security institutions are capable of achieving justice.”

Kadhimi had formed a special committee for addressing the violence during the protests that erupted in October 2019. "The committee which consists of judges and legal experts is continuing its job resolutely the all obstacles and difficulties," Kadhimi noted at the time.