Iraq’s key Umm Qasr Port has been positively affected by measures to reduce corruption, leading to a massive revenue increase in 2020 despite fallout from the COVID-19 pandemic. Plans for the massive, nearby Faw Port and an electronic system being put in place may also serve to shore up state coffers and reduce those of “outlaw” groups. 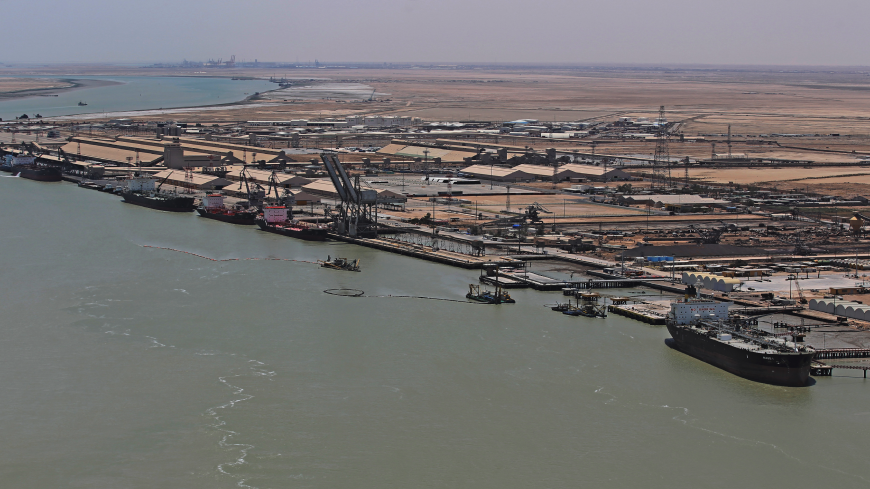 An aerial view taken during the visit of the Iraqi prime minister to the southern city of Basra shows the port of Umm Qasr, on July 15, 2020. - AHMAD AL-RUBAYE/POOL/AFP via Getty Images

The road south to Umm Qasr, Iraq’s only deepwater port, passes the high walls and barbed wire of the infamous former Bucca prison as well gas flares on the horizon from extensive fossil fuel extraction in the country’s southern Basra province.

The Kuwaiti border is just west of Umm Qasr, while the regional capital, Basra, lies almost 60 kilometers (37 miles) north. To the southeast is the Faw peninsula, stretching to the Iranian border and site of a strategic project that has over the years suffered repeated delays but which may now be picking up momentum.

Military forces guard the entrance to Umm Qasr North, one of Umm Qasr's three ports and through which the lion’s share of traffic passes.

While several smuggling busts occurred there in previous years, port officials told Al-Monitor that only a few drones had been found during an inspection in recent weeks and revenue had increased enormously following anti-corruption measures enforced last summer.

During a Jan. 14 visit, Al-Monitor was shown the electronic system being put in place at the border and granted an extensive, exclusive interview with port director Mohammed Jassim al-Janabi.

The Umm Qasr North Port chief, who noted that he had only in recent weeks been transferred to the port from a border crossing with Iran, told Al-Monitor that the increased military presence and various security measures introduced by Prime Minister Mustafa al-Kadhimi’s government and Border Ports Authority director Omar Al-Waeli had enabled those working at the ports to feel safe from threats from corrupt businessmen and the "parties" many are linked to.

“Parties” is a term often used in southern Iraq to refer to Shiite armed groups boasting a political faction, such as Asaib Ahl al-Haq and the Badr Organization. In speaking to this journalist during the first months of massive anti-government protests across south and central Iraq beginning in October 2019, protestors and human rights activists often blamed not-better-defined “parties” for much of the violence they were subjected to but did not want to name any specific ones out of fear of retaliation.

Janabi, who is originally from the Sunni-majority and currently closed military zone further north of Jurf al-Sakr, renamed Jurf al-Nasr after it was retaken from the Islamic State (IS) by Iraqi forces, noted that he had only been to nearby Basra once in his life.

He stressed that his job stopped at the “well-protected, now” entrances and exits of the port and that those stationed at border ports of entry were now regularly transferred after a few months so as to prevent possible abuses of position.

Kadhimi, who has drawn on his experience and position as head of the national intelligence agency in his efforts to curb the country’s widespread corruption, was sworn in as prime minister on May 6 of last year.

Months of a government void had followed the resignation of the previous government as a result of the massive protests that began in late 2019, which made eliminating the crippling levels of corruption one of their demands.

Janabi claimed that now, with the military guarding the entrances and exits and those manning the port being transferred every few months, corrupt businessmen with links to armed groups had been hit hard.

He noted that the bulk of trade coming through the port was with Asian countries. The vast majority of Iraq’s oil, upon which the country’s economy currently relies heavily, is also exported through Iraq’s southern ports.

A sharp increase in revenue both from the port itself and from other customs points at the country’s border crossings is being witnessed in official figures.

“An increase of about nine to 10 times” over the previous year, he noted, despite the effects of the COVID-19 pandemic and restrictions and crises linked to it, “is enormous.”

The port director told Al-Monitor that few attempts at smuggling had been made since the much-publicized military reinforcements and new measures compared with previous years. However, three drones with cameras were found during one inspection.

Janabi said Iraqi nationals were the ones that had been trying to smuggle them through the port. He declined to say where the drones were from or where they were intended to end up, simply noting that an investigation was underway.

Drones have taken on an ever more prominent role in recent years in incidents between the United States and Iran-allied groups in Iraq and in IS attacks.

A government official who asked not to be named as he did not have permission to speak on the matter told Al-Monitor that, meanwhile, discussions were underway between Iraq and the United Arab Emirates about opening a direct shipping line between the UAE and the Umm Qasr Port.

In October, it was announced that the first shipping line between Oman and Iraq’s Umm Qasr had also opened.

Meanwhile, the massive project for the Faw Port further southeast near the Iranian border is considered strategic to Iraq’s future. When finished, it will be one of the world’s 12 largest ports.

The hope that increased security of the key port will lead to a sharp drop in corruption, coming to the aid of the country’s bleak financial situation and restoring international investor confidence, seems to be bearing fruit thus far.

Janabi pointed out that though outlaw groups may make use of other strategies, striking a blow to even one major income stream could have a significant effect.