In the southern Iraqi province of Dhi Qar, activists say they fear they will be targeted by Iran-backed armed groups. 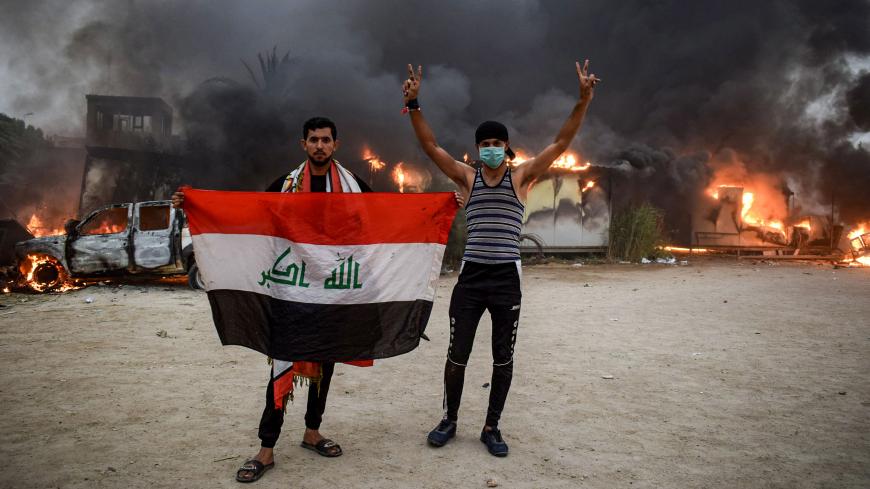 Iraqi protesters pose with a national flag during an anti-government demonstration outside the burning local government headquarters in Nasiriyah, Iraq, Oct. 25, 2019. - AFP via Getty Images

NASIRIYAH, Iraq — Protests in Iraq’s southern Shiite-dominant provinces have garnered scant media attention despite thousands taking to the streets and the attendant deaths of a number of protesters and security forces. The situation escalated in the southern Iraqi province of Dhi Qar Nov. 17, with security forces shooting live ammunition to disperse protesters.

​Dozens have lost their lives in Nasiriyah, Al-Monitor learned during a visit to the city Nov. 9-10. Several activists said they are restricting their movements due to fear of arrest.

The road from Baghdad to Nasiriyah, the capital of Dhi Qar province, is flanked by wide, flat, colorless expanses on both sides. The crossing of camel herds occasionally holds up traffic.

Not far from the city is the notorious maximum security prison known as al-Hoot, or the Whale, where some of Iraq's most dangerous criminals are detained and others are hanged. Human rights groups have criticized the prison for its human rights violations.

The risk of being charged under the country’s widely applied terrorism laws is a huge concern of protesters. Many are more afraid, however, of armed groups answering to “parties” instead of the central government.

Protesters in Nasiriyah's main square refuse to name these “parties,” but they say “everybody knows who they are.”

Ali, a 51-year-old government employee, said that people in the area are referring to the Badr Organization and Asaib Ahl al-Haq, both Iran-backed armed groups that are partially incorporated into the government.

Ali has avoided returning home for a month, except to see his children and grandchildren.

When he does, it is only for a tense five minutes. His daughter-in-law said his grandchildren are traumatized after they were woken at 2 a.m. in early October by counterterrorism forces taking orders from “parties,” or so they believe.

Ali was not home the night the armed men arrived because he had been alerted that it was not safe, he said.

When Al-Monitor visited Ali’s home, his son and daughter-in-law said many armored vehicles and dozens of armed men had arrived. They were told, “Ali’s tongue would be cut off and his legs broken.”

Ali said he knew the police chief and felt fairly comfortable moving around in town but that he could not risk traveling to another city or staying in one place for too long.

The police chief, however, was forced to resign shortly after Al-Monitor’s visit, Ali said in a subsequent WhatsApp message, and one from a different area of the country had been brought in.

Ali said that the governor of Dhi Qar province had issued orders to clear the main square of the protests by force and that the former police chief had refused to use violence. The police chief was subsequently replaced, he said.

As of mid-November, after a month and a half of protests, Ali said a total of 46 people had been killed in the city and 643 injured.

Reliable casualty figures are difficult to obtain, both among protesters and security forces.

Ali’s fellow activist, Amer Hussein Farhan, told Al-Monitor in a meeting near the main square that “Badr and intelligence services controlled by parties” were initially responsible for the killings.

“There were no rubber bullets or tear gas canisters used in this province, only live ammunition,” he said. “Most of those that died didn’t even make it to the hospital.”

After Oct. 25, he said, “the army and the police didn’t shoot a single bullet. The people doing the shooting were Asaib Ahl al-Haq.”

Ali summed up the difference between the three main “political parties linked to armed factions,” in that “Badr acts as a mafia and will kill at night or secretly. Asaib Ahl al-Haq will do it openly, even in the day.”

When asked about those linked to Muqtada al-Sadr, who has a great deal of influence in the area, Ali said that his Saraya al-Salam “are powerful but they aren’t killing anyone.”

He added that the arson and attacks on property were wrong, but that hopelessness and corruption have led to widespread rage among many youths.

In the main square, not far from the government buildings, down a street lined with pharmacies, a dizzying array of multicolored tents sit. Inside hang posters containing slogans and demands, like to end widespread corruption, to provide jobs and to change the constitution. Photos of the individuals who have lost their lives in the protests, or martyrs, since Oct. 1 are also displayed.

Boys danced to loud music, chanting slogans amid a seemingly festive atmosphere. Yet one boy sobbed on a stretcher at a nearby medical point, saying he had just found out his brother had been killed in the protests in Baghdad. He did not want his photo taken, citing potential risk from “the parties.”

Down a side street is a building locals call “Turkey Two,” in reference to the high-rise building in Baghdad that protesters occupied for weeks. Banners hang from this tall structure as well, with young men acting as lookouts on the upper levels.

At one tent in the square is Sheikh Amer al-Khafaji, a tribal leader in the area who has publicly supported the protests from the beginning.

Meanwhile, the homes of several parliamentarians and politicians from the nearby town of Shatra have been set on fire, including the house of Hamid al-Ghezzi, the secretary-general of the Iraqi Council of Ministers.

A member of parliament not from the area told Al-Monitor in Baghdad: “It is unclear what is going on in Shatra, but it seems out of government control.”