Concerns over whether weapons held in and near urban areas are being properly stored — and who is holding them — are being raised after several blasts of unclear origins near major Iraqi cities. 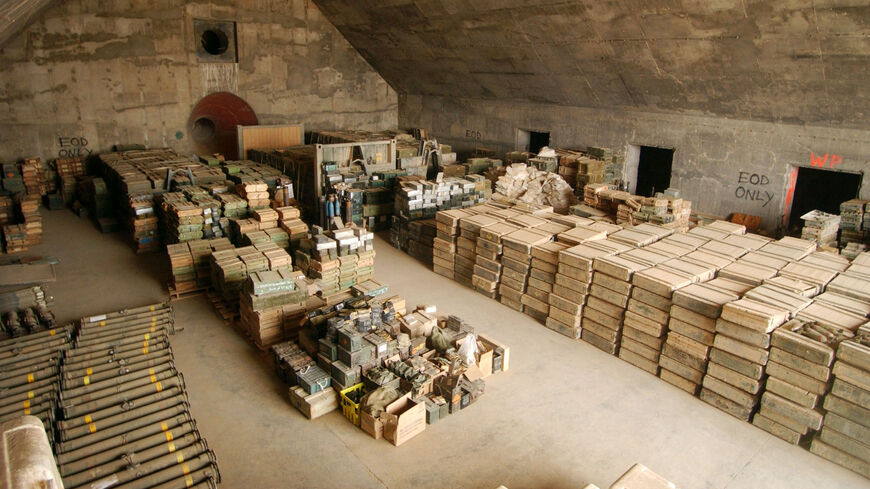 In this handout photo, a munitions storage area at Baghdad International Airport is seen on May 7, 2003, in Baghdad, Iraq. - Cherie A Thurlby/USAF/Getty Images

BAGHDAD — As extreme heat and power outages continue to weigh heavily on Iraqis’ lives, explosions reported on Aug. 11 near Baghdad at sites hosting Iran-linked, government-salaried armed groups raised questions once again about the safety of munitions and those in control of them.

Daytime temperatures hover near 50 degrees Celsius, overheating phones, spoiling food and blasting faces as if a furnace door had been opened when leaving air-conditioned spaces.

In a country awash in weapons, much of them potentially improperly stored, such high temperatures can be deadly in various ways.

A weapons depot that blew up in eastern Baghdad’s overcrowded, impoverished Sadr City in June 2018 killed at least 18 people and injured dozens. Earlier this month, several people were reportedly killed when an explosion took place at facilities outside Najaf held by the armed group Saraya al-Salam, which answers to the popular Iraqi Shiite cleric Muqtada al-Sadr. It is unclear whether the explosion was due to weapons or whether it had been caused by a fire and the explosion of an oxygen cylinder, as a spokesman for the group told a local media outlet.

The sites affected by the Aug. 11 incidents were reportedly under the control of the 12th Brigade of the government-salaried Popular Mobilization Units (PMU). This brigade is close to the Iran-linked Shiite “muqawama” (resistance) faction Harakat Hezbollah al-Nujaba (HHN), which has fought across the border in Syria on the side of the Syrian government against local opposition groups and was designated a terrorist organization by the United States in 2019.

The devastating August 2020 Beirut port explosion, which left over 200 dead, sparked major concern in Iraq — and many at that time urged that immediate measures be taken to remove weapons caches from urban areas.

Calls for militias to be disarmed and all weapons to be brought under state control have also been a constant for years and were one of the main pledges made by Prime Minister Mustafa al-Kadhimi when he was sworn into office in May 2020, following massive protests that had begun in the autumn of the previous year and left hundreds dead.

A source contacted by Al-Monitor within HHN forwarded an official statement that said, “An electrical fault occurred in a caravan within the sector of the third regiment belonging to the 12th Brigade stationed on the borders of Baghdad governorate while they were preparing to replace the force stationed in the Tarmiyah area” north of Baghdad.

Follow-up questions as to what had happened instead at the site south of Baghdad — Jurf al-Naddaf — had not been answered by the HHN source by the time of publication.

In July 2020, two explosions occurred at a weapons depot inside the al-Saqr military base in southern Baghdad at facilities hosting federal police and a PMU contingent. An official statement had at that time blamed the explosion on “mismanagement of the weapons and the heat,” while HHN had instead claimed that an airstrike had hit the base.

In August 2019, at the same base, one person was killed and 29 injured when a “weapons depot controlled by Hashid Shaabi (PMU) paramilitias caught fire, setting off explosions and sending rockets crashing into neighboring districts,” the Rudaw media outlet reported at that time.

In July of this year, a weapons depot held by a Sunni tribal PMU in al-Qaim near Iraq’s border with Syria exploded. A member of the PMU told Al-Monitor that this explosion had been caused by “infiltrators,” without giving further details.

Sadr supporters and his Shiite political rivals in what is known as the Coordination Framework (CF) are currently conducting rival protest sit-ins amid bickering over the next government: Sadr’s are outside the Iraqi parliament, while the CF have tents and fewer people on the other side of the Tigris River in the Jadriyah area of Baghdad.

As members of the CF were flown to the Kurdistan Region of Iraq (KRI) on Aug. 14 for more talks aiming to work toward either finally forming a government or calling new elections over 10 months after the last ones, much of the population seems to be losing ever more of the scant faith they had in them even during those elections: Turnout was reportedly a dismal 36% of eligible voters, the lowest recorded in the country’s post-2003 history.

Among the most frequent complaints made to Al-Monitor when reporting from mass Friday prayers called by Sadr on Aug. 5 and the sit-in surrounding the parliament in the Green Zone was that of a lack of electricity and worsening poverty, with the right to cast yet another vote being rather far down on their list of demands.

In late July, the Baghdad-based al-Mada website quoted a source within the Iraqi air force lamenting frequent and increased use of military aircraft to transport politicians “for personal reasons.”

An Iraqi security expert claimed to the media outlet, “The operational cost of military aircraft is not less than $25,000 per hour, which includes fuel expenses and the crew authorized to fly and other services.”

One political analyst commented on Twitter sarcastically, “Indeed, the people of resistance and jihad need special services and care,” in reference to senior Iran-linked PMU leaders using these military flights.

Criticism was also directed at the CF for some of its representatives having previously claimed that the KRI was hosting Israeli spies only a few months ago — thereby justifying ballistic missile attacks claimed by Iran’s Islamic Revolutionary Guards Corps on it in March — and now flying on expensive government-funded ones to the KRI capital, Erbil.

The main Baghdad office of the most popular and largest political party in the KRI, the Kurdistan Democratic Party (KDP), was set alight in late March by supporters of some of these Iran-linked factions.

Muqawama groups regularly make statements about their ongoing jihad against Israel — often citing the United States as well as their main enemy — as their top priority, raising questions about whether the PMU brigades linked to them answer to the Iraqi state and to what use their weapons may be put.

HHN, for example, had earlier this month reiterated in a statement that its “weapons and men” were at the disposal of the Palestinian “resistance” against Israel.