Iraqi parliament re-elected Mohammed al-Halbusi as parliament speaker amid protests and rockets in the Green Zone. 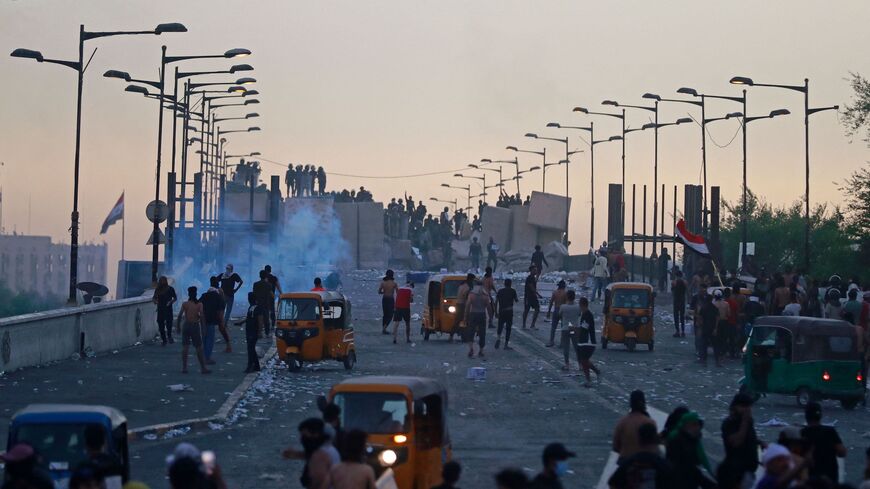 Supporters of Shiite Muslim cleric Muqtada al-Sadr clash with Iraqi security forces in Liberation Square in the center of Iraq's capital, Baghdad, on Sept. 28, 2022, during a parliament session in the nearby high-security Green Zone across the Tigris River. - AHMAD AL-RUBAYE/AFP via Getty Images

At least two rockets also landed in the Green Zone this afternoon, according to local media reports.

The parliament met for the first time in two months to vote on Halbusi's resignation that the speaker submitted two days prior. According to the Iraqi Constitution, lawmakers must vote whether to accept or reject the speaker's resignation.

Parliament voted to reject the resignation and keep Halbusi in his post; it also elected Ali Mosen Mandalawi as first deputy.

Mandalawi is an independent parliament member allied with the Coordination Framework, a bloc that includes Shiite parties affiliated with Iran.

Sadrist members of the parliament, including Zamili, resigned from the legislature in mid-June after three failed attempts to form a new government.

In Iraq's general elections in October 2021, Sadr's bloc was the largest winner with 73 of 329 seats. He then made an alliance with the Sunni Taqaddum party led by Halbusi and the Kurdistan Democratic Party led by Massoud Barzani. The alliance succeeded in electing a speaker but failed to elect a president due to the requirement that two-thirds of members be present for that vote.

The Coordination Framework was able to form a so-called "blocking third" in order to halt the government formation process.

The Coordination Framework tried to form a government, nominating Muhammad Shia al-Sudani (a close figure to former Prime Minister Nouri al-Maliki, a historical foe of Sadr) for the position of prime minister in late July.

Sadrist protesters stormed the parliament back then to stop the Coordination Framework from forming the government.

The confrontation between the two Shiite sides — the Sadrists and the Coordination Framework — led to a bloody clash in late July, leaving about 70 dead and hundreds wounded.

Sadr had ordered his followers to withdraw from the Green Zone and parliament building back then to stop the bloodshed.

Today is the first time since then that parliament is resuming its work, amid great preparation by the Coordination Framework and Sudani himself to form the government.

Although this session was not scheduled to form a new government and was focused solely on re-electing the speaker and electing a new first deputy, there were reports and expectations that a new Coordination Framework-aligned coalition was planning to do so, provoking protests from the Sadrists in Baghdad and other southern provinces.

Thousands of Sadrist protesters gathered in Liberation Square in central Baghdad and moved toward the Green Zone, but they failed to enter the area due to a heavy blockade set up by security forces.

Protests were held in Basra and Nasiriyah as well.

Two rockets were shot in the areas surrounding the parliament — leaving seven wounded as of the early afternoon — immediately after the election of Halbusi and Mandalawi.

Parliament members left the building immediately after that.

A Twitter account linked to Sadr, which operates under the name “Saleh Muhammad al-Iraqi," wrote that the Coordination Framework's inclination to form a government indicates that they are not listening to the people's demands and this political system is not operating well in such circumstances.

The incident prompted intense anger among Iraqis, and the Foreign Ministry issued a statement condemning it.

Iraqi Prime Minister Mustafa al-Kadhimi in turn called upon political parties to push the national dialogue forward in order to end the deadlock and form a stable government.

The prime minister “stressed that the current security situation reflects the political situation,” according to a statement from his office. "He reiterated the call for dialogue between all the forces dealing with the political issue to overcome the current crisis, support the state and its institutions to carry out their tasks, spare citizens the consequences of political conflicts, maintain security and reject any harm to social peace."

In a statement marking the anniversary of the outbreak of the 2019 October Protest Movement, the United States and the United Kingdom's embassies in Iraq expressed concerns over the political parties' failure to form a government after months of delays. In a joint statement, they noted that a repeat of the bloody clashes from Aug. 29-30 is intolerable and called on all political parties to be involved in forming a stable, legitimate government with full authority.