The Fatha road snakes behind the heavily damaged Beiji oil refinery, crossing between the low-altitude Hamreen and Makhoul mountain ranges into an area of okra fields and mullahs who fear Islamic State (IS) sleeper cells. 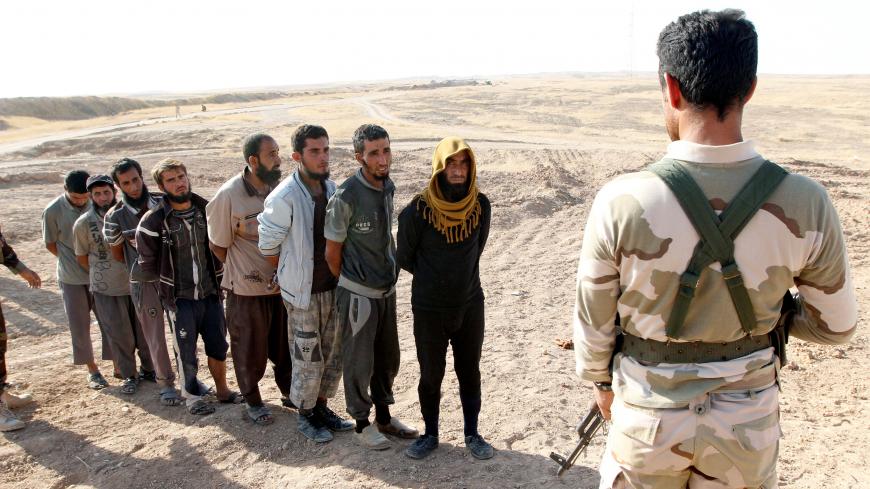 HAWIJA, Iraq — The area southwest of the Iraqi city of Kirkuk has seen several attacks and anti-Islamic State (IS) operations this month. Five foreign IS members, including two leaders, were reportedly killed in the Rashad subdistrict April 9, while "tunnels and guesthouses'' used by IS were destroyed April 10.

Two days later, IS injured four federal police officers in an attack in the same subdistrict and killed a "man in front of his family for cooperating with security forces," while destroying and burning down several homes for the same reason.

Weapons, supplies and fighters continue to be found in the nearby Hamreen Mountains. Officials estimate the number of fighters hiding in them anywhere from less than a hundred to several hundred.

Security officers in the area give similarly wide variations on the number of civilian returnees to Hawija and the surrounding area, which was liberated from IS in early October 2017.

Several of them claimed that family members of IS in some of the villages are helping IS fighters with logistics and basic needs.

The Hamreen Mountains are part of what Hisham al-Hashimi calls Iraq’s "triangle of death," where IS has in recent months conducted insurgent attacks.

Hashimi, an expert on terrorist groups who works as an adviser to several security departments in the country, told Al-Monitor in an interview in late March that it was important to focus more on intelligence in areas around liberated cities to prevent sleeper cells from operating in rural areas and to concentrate on reducing the authority of local tribes and armed groups while increasing a sense of Iraqi national identity.

The Fatha road toward Hawija was cut for over two weeks in late March and early April by a local Popular Mobilization Unit (PMU) manning it under a local sheikh, officially due to the need to clear bombs.

Locals claimed it was instead because the PMU had been accused of taking bribes and the sheikh had responded by calling for the police to take it over. Days of negotiation were required to reopen it, said Mullah Majeed, a well-known local figure who left preaching years ago to take up arms against IS.

Many of the villages along the road toward Hawija have been at least partially repopulated, and women in bright dresses and headscarves were seen by Al-Monitor working in roadside fields there April 6.

At one home Al-Monitor stopped by along the way, a family that had returned from Kirkuk shortly after the area was liberated spoke about the hope that their girls would be able to continue their education after high school and noted that schools are open in the area and that security is good near the Fatha crossing.

Hawija instead remains a veritable ghost town months after it was retaken in a battle spearheaded by the PMU that saw many IS fighters seemingly "vanish."

At the headquarters of the local PMU, Brigade 56 Commander Hussein Ali Najm al-Jabouri was attended by boys in military gear serving traditional Arabic coffee to a few dozen men in camouflage and white dishdashas the morning of Al-Monitor’s visit April 6.

The gaunt, mustachioed man with a heavily lined face deflected questions about his job prior to fighting IS but said that he had lost several family members at IS' hands and that he is now a "Muslim in name only."

He repeatedly warned that any journalists were likely to be killed by "IS-supporting villagers" around Riyadh and Rashad, nearby towns along a key road linking Kirkuk and Tikrit. He also claimed that all non-local PMU in the area had "gone home."

In the weeks it took Al-Monitor to gain permission to access the area, this correspondent had been repeatedly told that the towns of Riyadh and Rashad were too dangerous to access. Mullah Majeed claimed he would be killed if he entered the area, and a local journalist said he had received death threats on his phone from IS members in the area, warning that they knew of his whereabouts.

Al-Monitor had previously visited Riyadh immediately after its liberation from IS in early October. By April 6, the town had been cleared of IS signature black flags and graffiti, but no civilians were in the streets.

Farther down the main road toward Kirkuk, Rashad is reached by passing blown-up villas and bridges.

An officer from the local PMU, traveling with this correspondent, repeatedly pointed at collapsed concrete structures along the road between the two towns, saying ‘’these were IS houses that Kurds destroyed."

Al-Monitor was allowed to visit the town only briefly with members from the local PMU who were visibly nervous about moving through territory clearly held by non-local PMU from the south, despite earlier denials of their presence there from several security officials.

The walls around the squat mud homes were scrawled with "Badr" and the names of other Shiite-led PMU. Some buildings had colorful "Ya Hussein" flags, invoking the historical figure revered by the Shiite community, and young men yelled out jokes as the local PMU vehicle Al-Monitor passed while others looked on suspiciously.

Farm animals were seen, but no civilians were spotted.

At a nearby local PMU base, an officer who had worked as a border guard under Saddam Hussein was in charge. The PMU answers to an al-Obeidi tribal sheikh from the area.

The officer told Al-Monitor that many of the families of IS members remained in villages around Rashad, where a high percentage of the population had supported IS. He added that the forces were arresting those found to be helping fighters still in hiding, but that it was a gradual process.

An officer from Riyadh said the families of those fighting against IS were instead too frightened to come back.

The situation is sharply at odds with that seen in most of the rest of the country, where family members of IS fighters have typically been forced out of their homes or fled, often to camps for internally displaced persons from which there is no real plan to move them.

"Hawija was the capital of al-Qaeda" in previous years, retired military officer Gen. Majid Jassim al-Quysi told Al-Monitor in an interview in Baghdad.

Having overseen intelligence operations in Salahuddin province between late 2008-2011, Quysi said, it was clear to him that it would be difficult to eradicate IS there entirely until "you build trust and rebuild the local economy."