The killing of at least eight Sunni youths from a village in Iraq’s Salahuddin province, allegedly by groups other than the Islamic State, has sparked outcry and demands for non-local forces to be expelled from the region. 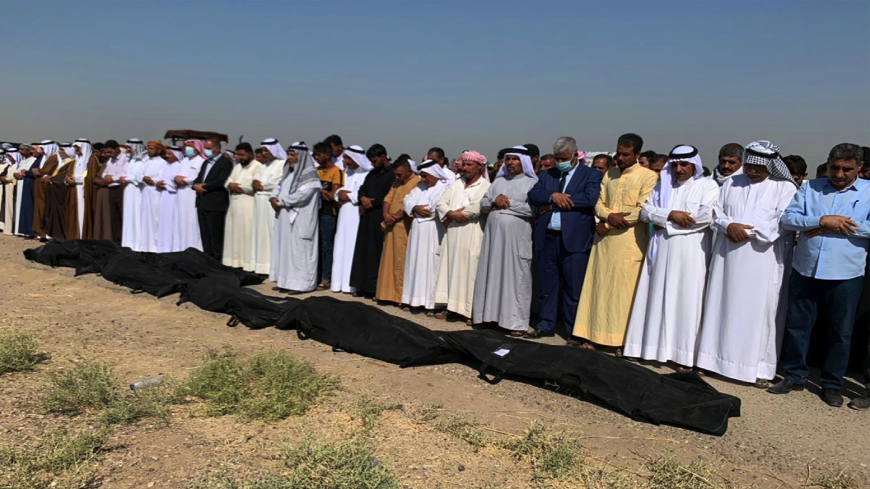 Sunni Muslim Iraqis pray over the bodies of eight out of 12 men, who had been reportedly kidnapped and later some found shot dead, in the Farhatiya area of the Balad region, located 70 kilometers (around 45 miles) north of Baghdad in the Salaheddin province, on Oct. 18, 2020. Local sources said the four other kidnapped men have not been found and the identities of the assailants remain unknown. - AFP via Getty Images

The specter of a return to sectarian bloodletting in Iraq after the latest killings in the southern part of Salahuddin province has raised alarms in the Sunni-majority province northwest of the capital.

Gruesome photos of the corpses of eight young men from a village in the Farhatiya district near Balad, hands bound behind their backs, appeared in WhatsApp chats and then on social media on the evening of Oct. 17. Twelve men had been kidnapped, but as of Monday morning, it was still unclear what happened to the other four.

Prime Minister Mustafa al-Kadhimi made a highly publicized visit to the area the following day and spoke to residents in an attempt to assure locals that there would be consequences for those who committed the crime.

Many noted, however, that progress has apparently not been made in the cases of several other assassinations of prominent figures in the country in recent months, such as that of well-known counterterrorism expert Hisham al-Hashimi in July, and expressed doubt that the perpetrators would be punished.

The young men killed were Sunnis. Locals immediately pointed the figure at Shiite-led “militias” operating in the area that are officially part of the Popular Mobilization Units (PMU).

In one cellphone video posted online in relation to the incident by Mishaan al-Jabouri, a prominent figure in the Salahuddin region, an elderly man with a traditional black-and-white checkered headscarf can be seen explicitly naming Brigade 42, part of the Iran-linked Asaib Ahl al-Haq (AAH).

Jabouri is known for involvement in a coup attempt against former Iraqi President Saddam Hussein, his activities against the US occupation in the post-2003 period and his role in politics since then.

He commented on the social media post, saying, “Whoever killed hundreds of peaceful Shiite protesters in cold blood will not hesitate to kill those he called Yazid's descendants! If we are satisfied with statements of condemnation on the crime of Farhatiya, their crimes will escalate.”

Hundreds of protesters, mostly from Shiite-dominant central and southern Iraq, were killed during monthslong, massive anti-government protests that started in October 2019. Many have accused various Iran-linked armed factions, some of which are brigades within the PMU, of being responsible for the deaths.

Some in Nasiriyah that this journalist spoke to in person at the height of the protests, amid internet shutdowns and generalized chaos at times late last year when they remained in hiding in the southern city, specifically named AAH as being behind assassinations of their fellow Shiites who had spoken out against them.

Jabouri’s son Yazan is the commander of a local Sunni PMU that received support from Shiite PMU commander Abu Mahdi al-Muhandis before he and Iranian Gen. Qasem Solaimani were killed in a US drone strike in January at the Baghdad airport.

Yazan has been called Muhandis’ "Sunni protege." He has in previous interviews with this journalist in the capital highly praised the late Shiite commander, who was at the head of the Iran-linked Kataib Hezbollah.

“The problem is not with this particular incident,” the younger Jabouri told Al-Monitor via a WhatsApp call on Oct. 18. “The problem is that certain people” hold complete power in certain areas of the country “for whom civilians are cockroaches: They can kill them at will and nothing ever happens.”

“If you don’t understand the locals, when you use violence you will get a reaction” that you may not expect, he added.

“In 2014, Sunnis did not feel the government was theirs. They did not feel they could get justice. And when you repeat the same mistakes, you get the same results,” he said with a clear note of exasperation in his voice.

Besides, he said, the Islamic State (IS) is “no longer a military threat [in Iraq]; it is a security issue” and must be treated as such.

“You will not solve the problem with soldiers, no matter how many you bring in. You need the support of the local community,” he said.

Jabouri said that he was certain, in any case, that “individuals associated with PMU brigades that are in charge of Balad and its surroundings” were involved in these latest killings.

Salahuddin as a whole is considered the heartland of the Jabouri tribe, though many other tribes are present in significant numbers through the province.

The name of the village the young men were killed in is Rifaat, and some of those killed belonged to the Rifaat tribe, according to a list of names of the victims this journalist was sent by a person from the area. She was told at least two belonged to a local tribal PMU from the area.

One source from the area claimed that AAH had wanted to set up a checkpoint nearby, and an argument broke out about the electricity they wanted from the village. Another claimed he had heard from locals that the AAH brigade had entered the village and locals thought they were IS and fired on them, but also that there had been an improvised explosive device attack on the AAH brigade recently.

In any case, both said the killings were in retaliation and were meant as a warning.

In July, a prominent parliament member from the region called for arming tribes to deal with continuing attacks in the Sunni area and a generalized lack of security. Others from the area had countered in interviews with WhatsApp with this journalist that fewer and not more groups with weapons in the area would work better toward this end. Though she has reported numerous times in recent years from the province, COVID-related restrictions have prevented her from traveling to the region in recent months.

In response to a question on whether non-local PMU units had been called upon to leave the province, Salahuddin Deputy Gov. Sheikh Ammar Hekmat told Al-Monitor that “some people want the forces to leave. But we need those extra forces to fight Islamic State sleeper cells coming from the western desert to the province frequently.”

Salahuddin “is a large province and borders five other provinces,” and the Oct. 17 “disgraceful incident that happened” is not actually representative of the non-local PMU, he said.

Hekmat stressed that “many of the [non-local PMU] forces have participated in fighting IS and maintaining security. They have sympathy for the people and provide services.”

The governor of the province pointedly noted in statements to the media that he did not consider this incident to bear the markings of a crime of terrorism committed by IS. By extension, many posited he was implying that the perpetrators were in fact armed groups not normally considered terrorists under Iraqi law.

He also noted that, according to “preliminary information,” the killers had been masked and “entered the area with the cooperation of the forces on the ground,” which includes the AAH-linked 42nd Brigade.

Some Iran-linked Shiite PMUs from more southern regions but that have forces deployed to the region instead blamed IS on their social media accounts. Kataib Hezbollah directly accused “some elements of trying to blame the PMU in order to expel it from the liberated provinces for political and electoral purposes” and called for a “full investigation.”