Sunni political parties are using murders in Salahuddin province to demand an end to the presence of armed militias blamed for killings. 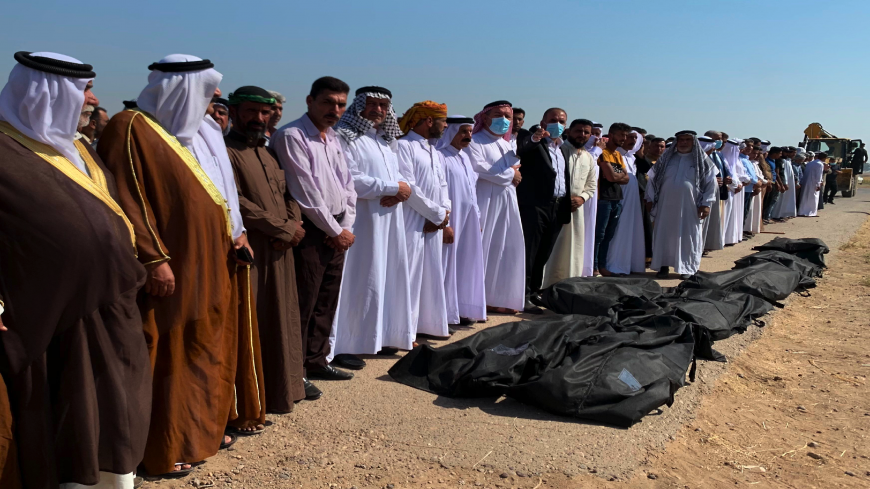 Sunni Muslim men pray over the bodies of eight out of 12 fellow Iraqis during their burial ceremony in the Farhatiya area of the Balad region, located 70 kilometers (around 45 miles) north of Baghdad in Salahuddin province, on Oct. 18, 2020. - AFP via Getty Images

BAGHDAD — The Oct. 17 murder of 12 people from the Sunni community in Salahuddin province north of Baghdad has raised the ire of Sunnis against Shiite factions present in their areas, as they have accused the factions of committing the massacre.

Since the agreement that was signed between the governments of Baghdad and Erbil on Oct. 11 to normalize the situation in Sinjar city and which stipulated the withdrawal of the Popular Mobilization Units (PMU) from the city, the Sunni parties have been trying to obtain a similar agreement in Sunni areas where Shiite factions have been deployed since the liberation of such cities from the Islamic State (IS). Parties opposing the Shiite factions’ continued deployment believe these have now come to control the security, economic and political aspects of life in said areas.

In the context of discussing the future of the security situation in cities previously controlled by IS, tribal political leaderships as well as the Sunni community as a whole are now increasingly calling for the expulsion of the PMU from their areas.

He added, “The murders that happened in Salahuddin province are reprehensible and completely unacceptable. Incidents such as Al-Farhatiya incident convey negative messages whereby insecurity has returned to the cities of the province.”

Hekmat said the local government is in contact with the committee investigating the Farhatiya incident, whose formation was ordered by the commander-in-chief of the armed forces.

He noted that “the committee received important information from the local authorities and numerous testimonies, and the blood of the martyrs shall not be spilled in vain."

However, a parliament member for the Sunni Alliance, Dhafer Al-Ani, told Al-Monitor the Sunni blocs in parliament demanded the removal of the PMU from the liberated cities, as "the presence of such forces has become unnecessary following the defeat of terrorism — which only left some scattered cells that the security forces are capable of dealing with and eliminating.”

He added, “The presence of a big number of undisciplined PMU members has stiffened the relationship between the PMU and the citizens amid acts of extortion, exploitation and abuse. Also, many incidents have been attributed to PMU members who tarnished the reputation of the PMU. Add to this the robbery of public and private properties, and preventing the return of the displaced to their villages and cities. These are negative daily practices that prompted us to demand that these factions be expelled from the Sunni cities and that the regular forces be settled for.”

Ani said that “in the wake of the Farhatiya incident, his bloc has raised the issue of the PMU redeployment with the prime minister and the rest of the influential political forces in parliament. The security situation is currently being assessed in order for the appropriate steps to be taken.”

Mohammed Karim, parliament member for the Asaib Ahl al-Haq movement affiliated with the PMU, told Al-Monitor the PMU believes it is still too early to withdraw from the areas previously controlled by IS, as the organization is trying to occupy some liberated cities. He put calls to expel the PMU from Sunni cities under the category of extortion on the part of political parties that have lost their popularity and are trying to raise security and sectarian problems to obtain sympathy before the early elections scheduled for 2021.

He also said “there are ‘foreign agendas’ behind the calls for the PMU to be expelled from the cities liberated from IS, and such agendas are seeking to divide the country and form a sectarian region for separation and division purposes. And this is something the people of these cities reject altogether.”

Karim said “the local forces in Salahuddin province are unable to deal with IS attacks. The same people who are now calling for the expulsion of the PMU will demand the expulsion of the ‘federal police,’ which they described in the past as sectarian militias, while they described the Iraqi army as ‘Al-Maliki's Army’ (in reference to former Prime Minister Nouri al-Maliki) because of the presence of elements of all sects, as is the case with the PMU.”

Qassem al-Kuraiti, commander of the 41st Brigade of the PMU, said in a statement Oct. 18 that “one of the PMU posts in the Balad district was attacked and besieged two days ago by IS members who withdrew toward the people and took a group of citizens, including members of the Tribal Mobilization Forces, who cooperated with security forces and the PMU.”

But such details will not change the positions of the Sunni political blocs, especially those established with the aim of ending the presence of the PMU in the liberated provinces, such as the Alliance of Liberated Cities and the Iraqi Forces Alliance, as these fear that the PMU weapons will affect the upcoming elections or help a certain Sunni party at the expense of another.

The time left until the June 2021 elections does not seem to be enough to restore normal conditions in said cities, especially considering that the PMU factions continue to refuse to withdraw from the Sinjar district despite the Iraqi government’s decision to limit security responsibility in the judiciary to the local police and the national security and intelligence services.