Despite its recent losses, the Islamic State was able to temporarily retake some liberated areas such as the village of Imam Gharbi, cutting the key highway between Qayyarah and Shirqat for weeks. 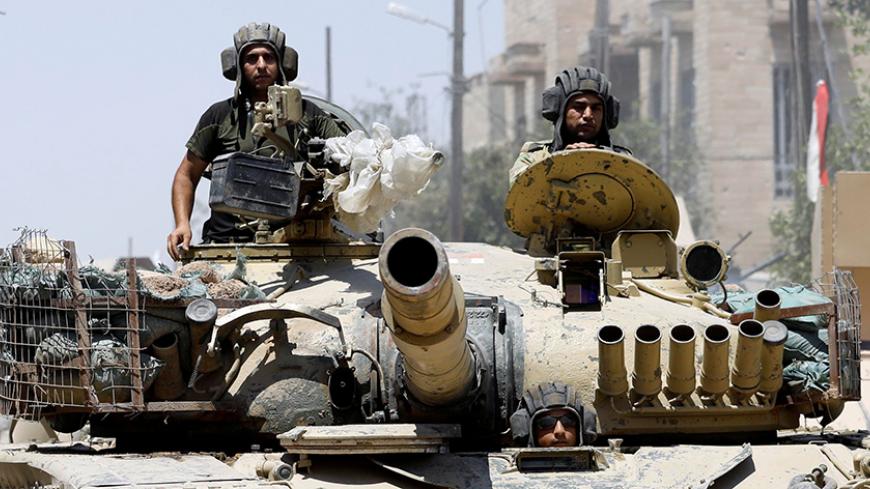 Iraqi soldiers look out from a tank as they advance toward Islamic State militants' positions in the Old City in western Mosul, Iraq, June 18, 2017. - REUTERS/Erik De Castro

SHIRQAT, Iraq — A village retaken by the Islamic State (IS) in the southern part of Mosul’s Ninevah province in early July has been clawed back after weeks of fighting and a SWAT team being called in from another province.

The village of Imam Gharbi was cleared after "at least 10" coalition airstrikes, officers involved in the battle told Al-Monitor.

On a July 15 visit to the nearby front line, several officers told Al-Monitor that their requests for airstrikes had to travel a circuitous route: first to the regional operations command and then Baghdad, and then on to the coalition forces at the nearby Qayyarah air base.

Lt. Col. Kareem Aboud Alaw, the commander of the Salah Ad-Din SWAT team called in to assist in the operations, noted that IS had exploited a "gap" in security near the river and had managed to take back an area measuring about "3 kilometers by one and a half."

He said that all of the security forces on the ground — namely the 50th Brigade in the Popular Mobilization Units (PMU), backed by the 9th Armored Division of the Iraqi army — were new. "They had only been there a few days" and didn’t know the terrain well, he said, adding that the Iraqi army and local tribal fighters had previously been responsible for the area.

Imam Gharbi and a few buildings of a nearby village in the southern Ninevah province were taken "during the night of July 3-4," Alaw told Al-Monitor. "We were called in to help two days later."

After about two weeks back under IS control, the village was retaken late on July 20 by a combination of emergency forces from the Ninevah and Salah Ad-Din regional operations commands, the SWAT team and local tribal fighters, the SWAT team's First Lt. Qusay told Al-Monitor.

He said that "40 to 50 IS fighters were involved in the battle" and that "28 to 30" had been killed. The rest had returned to the part of Shirqat still under IS control on the other side of the river, where the city of Hawija is located.

The village of Imam Gharbi had repeatedly been said to have been cleared prior to this date, but during Al-Monitor’s visit on July 15 there was still significant terrain to be regained and a key highway between Shirqat and Qayyarah — the site of an air base used by the international anti-IS coalition — was still cut.

The bodies of two local journalists were also still lying where they had fallen after being hit by IS snipers, as recovering them was too dangerous. Other local journalists who had traveled with them had to be rescued by the SWAT team.

The surprise attack on the village near the western bank of the Tigris slightly north of the flashpoint town of Shirqat occurred a few days before victory was announced in Mosul. Since the attack, IS forces "have been concentrated in Imam Gharbi and there have been very few attacks in Shirqat," one SWAT officer at the front told Al-Monitor.

Meanwhile, rumors had abounded in the capital that the Shiite PMU had been responsible for gains in the Sunni village of Imam Gharbi, but everyone Al-Monitor spoke to on the ground there denied that they were even in the area. Nevertheless, weathered, bright yellow "Ya Hussein" (a reference to the historical religious figure revered by the Shiites) flags are hoisted high at many checkpoints in the area "out of respect for their help in liberating the area" prior to the current attack, one resident said.

The road running out of Shirqat northward toward Imam Gharbi passes grain silos with the faded visage of Saddam Hussein still visible on their side on the left and the Tigris on the right, with IS still holding the other side of the river.

Hawija — where many IS fighters from the Kirkuk and Diyala areas went after their areas were reclaimed by Iraqi forces and from which a major attack was launched last autumn on the oil-rich city of Kirkuk in Iraq’s disputed territories — will likely receive attention only after Tal Afar is retaken from IS.

Qusay noted that several important IS figures had come from Imam Gharbi and that it had been a stronghold of insurgents even before the current war. The Salah Ad-Din SWAT team had been called in for their training by US forces, he said. "The fighters knew the area well, and they expected the locals to support them."

He added that the proximity of the area to desert terrain to the west meant IS expected to be able to get fighters and weapons in through vast tracts of land difficult for Iraqi security forces to monitor.

The fact that the area is near Qayyarah Air Field West, which is key to the Mosul operations, and some 60 kilometers (37 miles) south of Mosul but only 7 kilometers (4 miles) from the village, was also likely a major strategic reason for IS to try to gain ground in the area.

The IS attack and Iraqi forces' subsequent difficulty in recovering the territory indicate what sort of risks may lie ahead for the fight for areas outside of Mosul still held by the group.