Jabhat al-Nusra's rebranding as independent of its parent organization al-Qaeda has not raised eyebrows in Tehran, where officials say only the group’s name has changed. 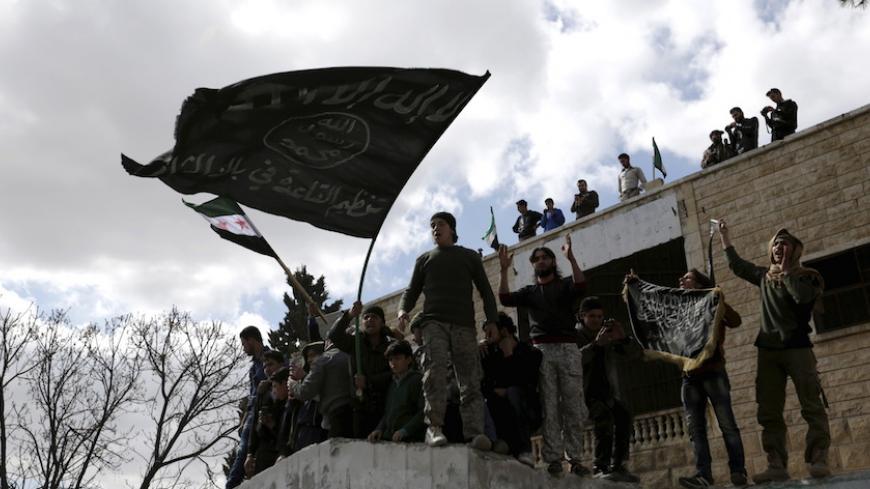 When Abu Mohammed al-Golani, leader of what used to be the al-Qaeda-affiliated Jabhat al-Nusra, on July 28 announced the rebranding of his group, there were few reactions in Tehran. Iranian Foreign Ministry spokesman Bahram Qassemi made a brief statement describing the rebranding as a game “aimed at delisting the group as a terrorist organization,” adding that “the ugly image of extremism and terrorism cannot be purified though such moves.” Qassemi added that the move indicates the “political bankruptcy of the extremists' regional sponsors, led by Saudi Arabia as the founder and principal supporter of al-Qaeda, the Taliban, Daesh [Islamic State], Jabhat al-Nusra and many other terrorist groups in the region, and particularly in Syria.” Moreover, Qassemi called on the international community to pay serious attention to the root causes of terrorism and its repercussions, and to pressure the founders and supporters of terrorist groups to end extremism.

Even among Iran’s allies, there was no direct reaction to the rebranding of Jabhat al-Nusra — which was the talk of the region for days — reflecting the view of the “Resistance Axis,” which brings together Iran, Iraq, Syria and Lebanon’s Hezbollah movement. This was strange given the fact that the Iranian-led coalition is the main — if not only — ground force in direct war with Jabhat al-Nusra in Syria, and that implications related to the group’s rebranding could affect the course of the war, which has been stuck between two edges of an abyss.

“Nothing really happened,” an Iranian military source told Al-Monitor on condition of anonymity. “What does it really mean in the field? … It's only a public relations move that makes it easier for backers of the terrorist group to pay money and send arms [to it] without being criticized. So rather than paying in secret, they'll do it openly.”

To Iran, Jabhat al-Nusra, Jaish al-Fatah and Ahrar al-Sham are much more dangerous than the Islamic State, the Iranian military source told Al-Monitor. “International and regional backers are doing whatever possible to tell the world that these groups are moderate Islamists, while they know that they are all — like Daesh — of the same origin, which is al-Qaeda.” The Iranian military source said, “Today, the central command of al-Qaeda is weak. The killing of Osama bin Laden left the group with nothing but some heritage that’s being exploited every now and then by its leaders to preserve influence, but now that even this heritage is gone, the [al-Qaeda-linked] groups are giving up their ‘mother’ because of her enemies. But this means that one day, when they are stronger, they [al-Qaeda affiliates] won’t mind giving up their new allies for whoever will preserve their existence. That’s why we are going to rid the world of them.”

The source added, “For years now, we’ve been doing our duty without looking at names and without giving attention to whoever is backing and supporting [these groups]. We’ll continue to do what we have to do, wherever we need to be, and whether it’s [Jabhat al-] Nusra, al-Qaeda, Daesh — or the new name it [Jabhat al-Nusra, now Jabhat Fatah al-Sham] was given — our mandate is to uproot it and rid the region of such a terrorist group. But it’s not us who should be on alert; it’s their backers who will be the first to be hit. Those who carried out the Sept. 11 attacks were one day sweethearts of the United States in Afghanistan, and there’s no doubt that those in Syria, when strong enough, will want to do 10 times what happened in New York in 2001. We know our enemy well, but others — despite their advanced techniques in foreseeing dangers — are still supporting their real enemies.”

Alaeddin Boroujerdi, the head of Iran’s parliamentary national security and foreign policy commission, said Aug. 4, “Dividing terrorists between good ones and bad ones doesn’t change anything.” Following a meeting with Syrian President Bashar al-Assad in Syria, Boroujerdi said, “Changing the names of terrorist groups doesn’t change the fact that they are terrorists. This won’t change the nature of such groups, and Jabhat al-Nusra continues to embrace the same radical, terrorist mentality despite the name change.”

Since the beginning of the crisis in Syria, Iran has stood by the defiant Assad and viewed any armed group fighting to topple him as terrorists. This included IS, al-Qaeda affiliated groups and the Free Syrian Army even when Iran was only defending Assad politically. From the day that Iran decided to send senior officers to help the Syrian army with their expertise, the Iranian encounter with anti-regime militant groups became physical, with reports indicating that the number of Iranian casualties since 2012 has jumped to over 300, including members of the elite Islamic Revolutionary Guard Corps, the Iranian army and the paramilitary Basij militia.

Of note, Golani’s announcement of Jabhat al-Nusra’s rebranding July 28 came only a few days before opposition factions, including his group, launched a fierce attack on Aleppo in northern Syria to end the government force’s siege on opposition-held areas. A senior Iranian official, who spoke on condition of anonymity, suggested in a phone call with Al-Monitor that the rebranding of Jabhat al-Nusra was related to this attack. In his telling, “The attempt to rebrand was the prelude to open cooperation during the recent Aleppo operation,” suggesting that the latter move was made with the blessing of regional and international backers of the opposition in Syria.