Is Syrian regime's seizure of Sheikh Miskin a tipping point? 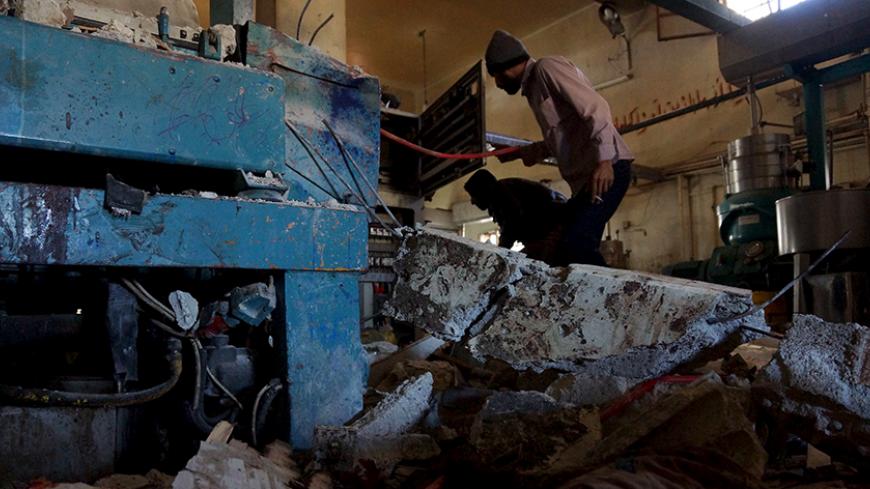 DAMASCUS, Syria — Syrian opposition forces seized the city of Sheikh Miskin, in Daraa's northern countryside, at the end of 2014, but on Jan. 26, the regime regained control of the city, aided by Russian air cover as part of a military campaign launched Dec. 28. The government forces of President Bashar al-Assad had earlier regained control over strategic towns in the countryside of Latakia, including Salma, recovered Jan. 12, and Rabia and Rawda, retaken Jan. 24. The government forces' progress on several fronts cannot be isolated from the ongoing negotiations to end the war. The Geneva III peace talks officially convened Feb. 1.

Sheikh Miskin — the fourth-largest city in Daraa province, with a population of 45,000 — is situated 54 miles from Damascus and 13 miles north of Daraa city, which makes it the gateway from Daraa’s eastern countryside to its western countryside, which is controlled by opposition forces. The General Command of the Army and Armed Forces declared in a Jan. 26 statement broadcast by the Syrian official news agency ​SANA that the Syrian army, in cooperation with popular defense groups and backed by Russian air power, had restored security and stability to Sheikh Miskin city following a “series of successes in which the army assumed control of several sites, most importantly the Brigade 82 Camp and al-Hash hill, in addition to destroying centers of the terrorist organizations,” causing them huge losses in fighters and equipment. On the same day, Russia Today posted video of Syrian armed forces entering the city.

Kamel Sakr, a field reporter and expert on military affairs, has covered several operations by the Syrian army. Sakr told Al-Monitor, “The Syrian army’s control of the city is an important step. The city stretches over a large area, 114 square kilometers [44 square miles], and is a strategic location linking Daraa to Damascus. It is also adjacent to the crossing point for militants from Daraa toward the countryside of Quneitra.”

Sakr said, “Controlling Sheikh Miskin [alone] is insufficient, however, to halt the armed groups’ advance and cut off their supply lines between Daraa and Quneitra. Accordingly, the Syrian army must advance toward the west, to the town of Nawa. This would have a significant effect on the Syrian army’s advance on the Daraa front.”

Sakr added, “The Syrian government sees progress on the ground as a political gain. This is legitimate, considering that politics cannot be separated from military operations, and whoever controls more geographical territory can impose the pace of the political process that might prevail in the Geneva III negotiations.” He also noted, “Moscow has increased its military support for the Syrian regime, because it is aware that [the regime’s] advance on the ground will give it a stronger position in the negotiations.”

Several factors led to the opposition factions' loss of Sheikh Miskin, most notably, 33 consecutive days of Russian airstrikes to establish complete control over the city. Another factor involved internal differences among the opposition factions. The Free Syrian Army (FSA) has been at odds with the Muthanna Movement (which had secretly pledged allegiance to the Islamic State in March 2015), as well as Jabhat al-Nusra, following attempts by the FSA to isolate radical Islamist forces, according to the pro-regime Al-Mayadeen news website. These factors weakened the factions’ resistance to the army’s attacks and hampered the entry of FSA fighters from other areas to assist in defending the city.

Mohammed Ibrahim, a media activist working in the opposition-controlled areas in the city of Dael, in the Daraa countryside, told Al-Monitor, “The main reason for the loss of Sheikh Miskin is the Russian airstrikes. More than 75 sorties were launched on the first day, and these were backed by Syrian artillery and missile attacks. This thwarted the attempts by the opposition battalions to repel the fierce offensive. Up to the fall of the city, Russian warplanes launched more than 700 raids.”

He added, “The cold weather conditions and snow weakened [the opposition's] resilience, not to mention unorganized FSA activity and lack of a joint operations room. This confused the opposition fighters and undermined their resistance, although they were willing to die to defend the city.” Ibrahim said that residents of the city had fled to neighboring regions in the early days of the Russian air campaign. “The few families that remained in the city until the last days left before the entry of the Syrian army. The Syrian regime has taken over an empty and destroyed city,” he said.

Gareth Bayley, Britain's special representative for Syria, was quoted by the Syrian Observer on Jan. 27 as saying, “The fall of al-Sheikh Miskin to regime forces today reveals the hypocrisy of Russian targeting in Syria. … Regime and Russian onslaught on the moderate opposition and civilians must stop.” Bayley also said, “This blatant targeting of opposition groups is deeply concerning, particularly as it comes just days before UN-led negotiations for a political settlement leading to transition in Syria.”

Days later, on Feb. 1, Iyad Abdul Hamid al-Daws, a captain in the Yarmouk Army in Daraa, appeared on Halab Today TV and said, “The international support for the opposition in Daraa is modest and insufficient to achieve victory over the regime. We have no anti-aircraft missiles to face Russia's advanced air force.” He added, “The opposition groups are now preparing a counter-campaign to be carried out from several axes in order to take back the city.”

That said, opposition fighters might not be able to regain the territory they lost as long as Russian support for the regime continues. The government’s control over Sheikh Miskin may herald a tipping point in the balance of power in southern Syria and pave the way for the regime’s control over other areas in Daraa province.

In addition, the regime on Feb. 3 lifted the opposition's siege of Nubl and al-Zahra, cities in the northern Aleppo countryside. This operation could cut the supply routes to opposition fighters coming from Turkey and weaken their ability to confront the regime. Thus, government forces might soon make advances on the northern front.

All this will reflect in one way or another on Geneva III. Already, UN envoy Staffan de Mistura announced in Geneva on Feb. 3 — only two days after the start of the fledgling process — the suspension of talks until Feb. 25, in part due to ongoing Russian operations against opposition-controlled areas.