Though the majority of Palestinians are weary of violence and concerned over a new and devastating confrontation, the general atmosphere is inching toward a full-blown intifada. 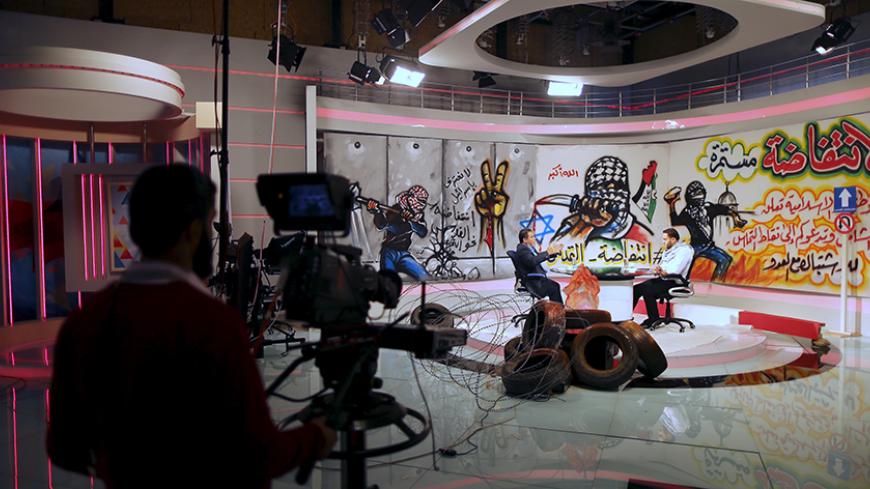 Nobody in Israel’s defense establishment had deluded themselves into thinking the weeklong lull indicated that the wave of attacks has ebbed. Speaking cautiously, they said that the drop in the intensity of the attacks might suggest a drop in motivation on the ground. That the armed Palestinian organizations have not yet joined the cycle of violence and that the attacking arena for now remains the sole domain of lone-wolf assailants were considered a positive sign. That was all true until Nov. 19.

Within a two-hour span, that day became the deadliest recorded since the outbreak of the recent wave of violence. Five people were murdered in attacks perpetrated in Tel Aviv and near the Etzion settlement bloc.

At noon, a Palestinian man from the village of Dura near Hebron stabbed two people — Aharon Yesayev, 32, and Reuven Aviram, 51 — to death while they were praying in a building in south Tel Aviv.

This day of deadly attacks, a date that might turn out to be a watershed in the recent outbreak, shows that the reinforcement of the Israel Defense Forces as well as deterrent operations (such as demolishing the homes of terrorists and arresting suspects) have not diminished the motivation of some young Palestinians to carry out attacks. On the contrary, the wave of stabbings now also includes shooting attacks, which attest to more elaborate planning.

As noted, the armed Palestinian organizations have yet to join in violence and for now remain bystanders. But for how long will they stay that way? This seems to be the million-dollar question that senior officials from both the Israeli defense establishment and its Palestinian counterparts are asking. Speaking on condition of anonymity, a senior Fatah official told Al-Monitor that many of the organization’s members on the ground were biting their lips and for now remained outside the “intifada,” but in his opinion this would not last very long.

He explained that there is an atmosphere of war in the territories, reminiscent of the second intifada. It can be seen in the day-to-day life in the territories, as many families have started hoarding foodstuffs, believing that a confrontation with Israel will lead to shortages. According to the source, the sale of gold has gone up in recent weeks. Bracing for war with Israel, people are selling their valuables, just as they did in the second intifada.

Additional telltale signs of preparation for war can be found in the terminology that many Palestinians are using to describe Israel as well as in their lenient stance regarding the terrorists’ motives. Such empathy is ubiquitous in statements by senior Palestinian Authority officials, news reports, broadcasts on Palestinian media outlets and, of course, social media. We are not talking just about incitement based on fabricated stories designed to inflame, but also about the rhetoric that uses words and phrases that suggest to each young Palestinian that this is the right step to take — to wage war.

Palestinian radio stations have picked up expressions taken from the second intifada. Anchors are talking about "batal" (heroism) and "intissar" (victory). What these expressions end up doing is totally demonizing Israelis. In caricatures featured in the Palestinian press, Israelis — mainly the settlers — appear as bloodthirsty demons. This tendency is also manifested in the words and expressions from that iconographic sphere that have become commonplace. Generally, the message that is being conveyed is that all Israelis are criminals ("mujarimin"), whose lives should not be spared. The stabber or the shooter — often a young, despondent Palestinian “who has nothing left in life” — is depicted as the victim of the situation becoming a hero. It does not matter whether he or she murdered civilians, including women and children.

During the second intifada, a heated debate took place in the Palestinian public about suicide bombers and the fatwas issued by clerics who sanctioned such acts. The debate over articles in the Palestinian press as well as in the Arab press in general was earnest. The fatwas issued by the clergy on the ground, endorsing suicide bombings by men and women, were met with copious criticism. In today’s wave of terror, however, discussions of attacks against civilians are completely absent from the Palestinian discourse. Quite the opposite; there is full understanding of the motives of the young assailants. This process of empathizing with terrorism is primarily the outcome of the demonization of the Israeli public at large.

A Facebook post by Adnan Damiri, the spokesman of the Palestinian security services, is one of many good examples of how the recent events are viewed. Complaining about the way the Israeli media covers the events, Damiri wrote, “The Israeli media has rallied with Israel’s radical right-wingers, raising a hue and cry over [the killing] of settlers. It considers them to be innocent. They cry over the people that robbed Palestinian lands and burned children, and they have no compunctions over the killing of Palestinian children.”

Damiri isn’t the only one. This is the general spirit, which not only shows disrespect toward the Israeli victims of the attacks but also tries to depict those attacks as justice served to the “criminals.” Most of the bitter language is aimed at the settlers, who are called murderous, heartless and criminal. This leads to the implicit conclusion that their blood can be let.

Even Nabil Abu Rudeineh, PA President Mahmoud Abbas’ longtime spokesman, does not mince words. In a statement issued Nov. 19 and disseminated by the Palestinian news agency WAFA, he said that Israel was pursuing a policy of targeted killings, executions and collective punishment. He failed to mention that those alleged “executions” are of terrorists who came to carry out attacks in Israel.

So this is by and large the dominant atmosphere in the territories, intensifying day by day, instilling motivation in young Palestinians. When the violence spiked in October, following the murder of the Henkins on Oct. 1, Israel was surprised to see such a flood of attacks. The prevailing assessment was that the majority of the Palestinian public was weary and beleaguered and would not be able to face another long armed confrontation with Israel. Indeed, so far most of the Palestinian public is not involved in this wave of violence. There are no mass demonstrations, riots or large-scales clashes with the IDF. This perhaps illustrates the weariness of the majority of Palestinians and their concern over a confrontation that would last for years.

That being said, all it takes is a few dozen young people emboldened by the general atmosphere to shorten the distance between a wave of terror and a full-blown intifada. Rhetoric, statements and reports fuel the street, and even weary folks are energized — willingly or unwillingly — with motivation, if only not to be left behind.