The plan by Defense Minister Avigdor Liberman to punish West Bank villages from which Palestinian assailants originate provokes anger and frustration amid the local population. 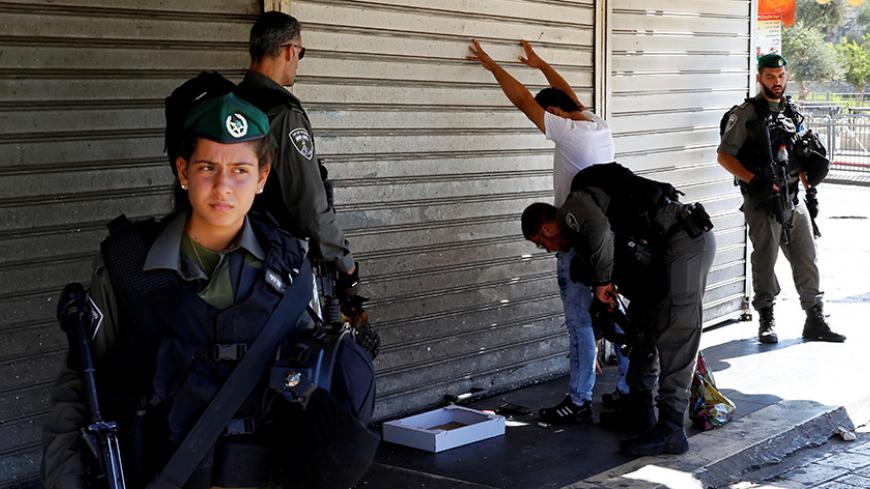 Is Israel on the brink of a new wave of terror? According to senior Palestinian security officials, the writing was on the wall from the minute Avigdor Liberman assumed office in late May as Israel’s defense minister and dictated a carrot-and-stick policy of rewards and punishments for Palestinian villages, depending on the origins of Palestinian assailants.

Following five months of relative calm, 10 terror attacks and attempted terror attacks occurred in the past week. On Sept. 19, adjacent to Herod’s Gate in the Old City of Jerusalem, a youth from East Jerusalem's Ras al-Amoud neighborhood stabbed and wounded a policewoman and a soldier. The policewoman sustained serious wounds, while the soldier was moderately injured.

On Sept. 16, three terror attacks took place: a Palestinian stabbed a soldier in Hebron; a Jordanian citizen tried to stab soldiers at the Damascus Gate of Jerusalem’s Old City, but was shot and killed; and in the Jewish settlement town of Kiryat Arba, a couple from the Palestinian village of Bani Naim tried to run over Israelis with their car at the Elias junction. The driver was shot dead by soldiers and his fiancee was seriously wounded. On Sept. 17, a soldier was slightly wounded at a checkpoint near Hebron’s Tomb of the Patriarch, and over the past days, some attacks took place at the Tel Romeidah Hebron neighborhood and in the Etzion settlement bloc. All in all, five police officers and two soldiers were injured in five days. On the Palestinian side, six were killed and three seriously injured, all of them suspected terrorists. Several weeks ago, Israeli security officials warned that in the runup to the Jewish High Holidays, starting Oct. 2, the likelihood of renewed terror attacks increases.

A Palestinian security source who spoke to Al-Monitor on condition of anonymity said that months of efforts to restore calm had gone to waste and that virtually not a day goes by that special units of the Israel Defense Forces (IDF) raid Palestinian villages in the area of the West Bank under Palestinian security and civil control, designated Area A, clashing with local residents. “Instead of understanding that these raids are the main cause of renewed tensions, they’re talking about Jewish holidays? What’s that got to do with it and why are they the cause?” he asked, chuckling.

Even as we spoke, the security official received an update saying that Israeli military forces had entered Dheisheh, southwest of Bethlehem, to carry out arrests in the refugee camp that has recently become a focal point of almost daily violence.

On Aug. 30, local residents who spoke to Al-Monitor complained that the IDF was frequently going into the refugee camp, shooting in the air, breaking into homes, conducting arrests and appropriating residents’ property. One of the camp residents warned that additional pressure on this and other Palestinian camps and villages could rekindle the anti-Israel violence. Judging by events of the past week, his predictions have been borne out.

The IDF argues that the calm of recent months was preserved due to intensive operational activity and effective cooperation with the Palestinian security forces in arresting terror suspects following precise intelligence information. In fact, this has been the leading strategy since the second intifada (2000-2005): a proactive strategy of preventive arrests of potential terrorists, rather than military activity in reaction to terror attacks.

But as has already been illustrated, the wave of terror that erupted a year ago, on Oct. 1, 2015, with the murder of the Henkin couple is different than the previous intifada. Analyzing Palestinian attacks indicates that most of the assailants in the terror attacks documented over the past year decided to act shortly before they carried out their plan, often acting impulsively with no organizational direction. Therefore, the IDF and other defense agencies concluded that unnecessary friction with the Palestinian population does more harm than good — except for a "ticking bomb" situation, when precise intelligence is obtained about a planned terror attack, in which case the Palestinian security forces do not oppose Israeli operations.

According to the Palestinian security source who spoke to Al-Monitor on condition of anonymity, the decision to replace the IDF’s policy of restraint with Liberman’s carrot-and-stick policy has fueled tremendous rage in the refugee camps. One need only see the many bandaged young Palestinians injured in clashes with Israeli troops to understand where this is going, he said.

On Aug. 16, a young resident of the Fawwar refugee camp was shot dead during an IDF operation. An investigative report issued by the B’Tselem human rights group said he was shot in the back even though he posed no threat to the soldiers. That night, 32 Palestinians were also injured in IDF operations. What contributed to the anger and tensions on the ground was an incident filmed by one of the camp residents and distributed by the Palestinian Ma’an news agency. It shows IDF soldiers shooting at young Mohammed Amassi on the roof of his house and his relatives trying to get him off the roof and provide medical care. Every incident that results in injuries, and certainly one documented on video, wipes out all the attempts to instill calm and teach restraint that were initiated at the start of the wave of terror by Palestinian President Mahmoud Abbas.

Abbas tightened security cooperation with Israel and, according to the security source, he instructed the head of Palestinian intelligence — Majid Faraj, whose family resides in the Dheisheh refugee camp — to arrest anyone identified by intelligence information as intending to act “against Palestinian interests.” Palestinian policemen, together with educators, fanned out in schools across the West Bank in an effort to convince young students that their lives are dear and they must rely on the president’s diplomatic activity to improve their lives in the future. But then came the new Israeli policy that was implemented despite a significant decline in the extent of terror attacks.

Now that the wave of terror has re-emerged, no one will remember what came first: IDF activity that fueled the motivation to carry out terror attacks or terror attacks that resulted in IDF retaliation, including friction with civilians. Either way, the result is clear: Liberman’s carrot-and-stick policy has ignited a blaze. One can only hope that the new defense minister has another contingency plan for dousing the flames.