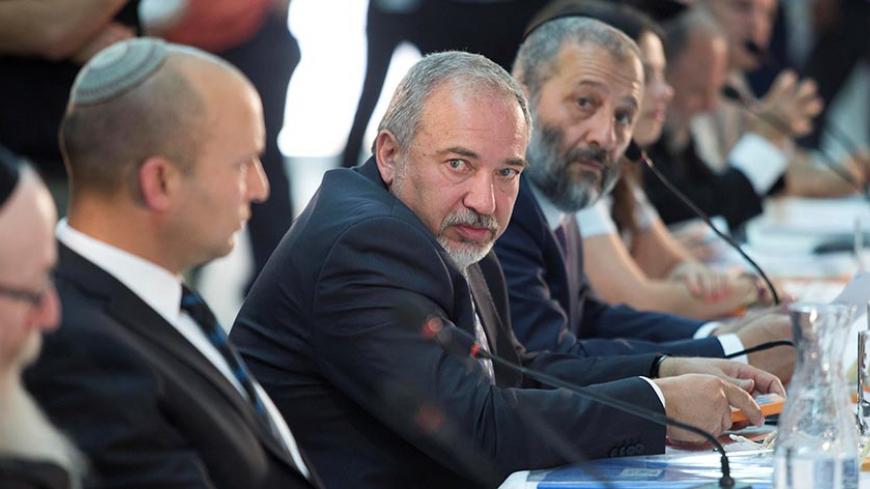 The Cabinet decision to approve a small number of building permits for Palestinians residing in the Israeli-controlled Area C of the West Bank reminds me of the famous story about the rabbi who instructed a Jewish man with many children to bring his goat into the family’s one-room home. When the crowding became unbearable, the rabbi instructed the man to take the goat out, and the man felt immense relief. The goat method did not, of course, solve the poor man’s original problem.

Israel has for years frozen virtually all construction in the Palestinian villages in the area under its full control (some 60% of the West Bank). No wonder the Jewish settlers there are turning the thawing of this freeze (part of Defense Minister Avigdor Liberman’s “carrot-and-stick’’ plan) into a major political scandal orchestrated by the HaBayit HaYehudi party and the Land of Israel lobby in the Knesset.

In an Oct. 26 column for Al-Monitor, Ben Caspit described a “second Liberman” who, unlike the first, is “rather pragmatic.” Indeed, compared to the Liberman we know and his loud friends on the political right, the defense minister in his current state could be considered a moderate, reasonable man. The pro-reconciliation image he's projecting with the help of his carrot-and-stick plan (of rewarding peaceful Palestinian villages while punishing the villages of Palestinian assailants) might propel him toward the coveted office of prime minister. But 50 years of occupation have proven that this policy distances Israel from another coveted goal: ending the conflict with the Palestinians and ensuring Israel’s survival as a democratic state and the state of the Jewish people.

Liberman did not invent this approach. The Roman poet Virgil wrote in his epic work “The Aeneid,” “Spare the conquered, battle down the proud.” Up until the last century, the carrot and the stick were tools used by colonial European states such as France, Belgium, Holland and Portugal to rule Africa. After years of apartheid the white rulers of South Africa understood that this method no longer works in modern times and enlightened societies, in which people’s right to self-determination is indisputable. Israel remains the only “enlightened” state to adhere to the belief that a system of reward and punishment can still be used to oppress national aspirations and enable rule over another people.

The carrot-and-stick approach was first used in the “Israeli-held” territories, as the late Defense Minister Moshe Dayan called them at the time. Michael Sassar, the former spokesman of Israel’s military administration in the West Bank, wrote in his diary that Gen. Uzi Narkiss, who was then commander of the central front that includes the West Bank, told a French journalist, “Of course the Arabs don’t enjoy the Israeli occupation, but we don’t care about that. What’s important to us is to achieve a reasonable, minimal extent of cooperation. We will not change the residents’ religion, culture or language, but we may change several aspects of their civilization.”

As an auxiliary tool of managing the occupation and an alternative to the Palestine Liberation Organization (PLO) led by Yasser Arafat, Dayan established the “village associations” in the early 1970s under the leadership of former Jordanian minister Moustafa Dudin. These associations served as a channel of dialogue with the occupation authorities to improve the daily lives of the Palestinian population. The settlers feared that the associations, which recognized the 1967 borders and even expressed willingness to see a few settlers to live in a future Palestine, would become partners for a territorial compromise with Israel. On the other hand, the PLO objected to the associations for fear they would erode its standing as the sole representative of the Palestinian people.

Rightly, Caspit gives credit for Liberman’s relative moderation to Coordinator of Israeli Activities in the Territories Maj. Gen. Yoav (Poli) Mordechai, who believes that creating a new reality for the Palestinians and building hope on the ground are the keys to calm in the entire region. But Mordechai, like all his predecessors in the job, all the past heads of Israel’s civil administration in the territories and most commanders of the central front who served in recent decades, did not claim that a bigger stick and upgraded carrots could provide an alternative to the national aspirations of a people under occupation. All of them understood that the Palestinian desire is, first and foremost, to be an independent Palestine in the Middle East and not Liberman’s vision of a conquered Singapore.

Liberman, like Netanyahu before him who coined the mantra “If they give, they will get; if they don’t give, they won’t get,” has not learned the lessons of two intifadas and the more recent wave of stabbing attacks: that the concept of an “enlightened occupation” has gone bankrupt. The first reason is that the Palestinian independence train left the station 23 years ago. One can try to throw a spanner into the works, but one cannot turn it back. The second reason is that the strong settlement establishment has a clear interest in thwarting the two-state solution and shrinking the Palestinians’ living space. Its representatives will do everything in their power to foil any effort to expand the presence of Palestinians in Area C. They refuse to even return to their rightful owners a baby carrot: the private lands they stole from Palestinians to build the illegal outpost of Amona despite a Supreme Court ruling two years ago ordering them to vacate the outpost. The settlers practice such intimidation against decision-makers that the Cabinet even kept secret its decision to grant the Palestinians a handful of building permits.

Indeed, Palestinian President Mahmoud Abbas is not a partner for Liberman’s carrot-and-stick plan, nor for his idea of revoking the Israeli citizenship of residents of the Israeli Arab town of Umm Al-Fahm. But Liberman is highly unlikely to find other candidates to help him carry out this plan. On the other hand, Abbas is a partner for the two-state solution based on the 1967 borders, while Liberman is a partner for irrelevant policy plans and new construction in the settlements. It should be noted that those who didn’t want the village associations at the time got the PLO, and those who didn’t want the PLO got Hamas in Gaza. Next in line is Islamic Jihad. They really are not partners for anything but eternal war. And that is exactly what Netanyahu promised us.