The Israel Defense Forces have been carrying out regular operations in the Dheisheh refugee camp and the villages of Hebron governorate, all inside West Bank's Area A and ostensibly under full Palestinian control. 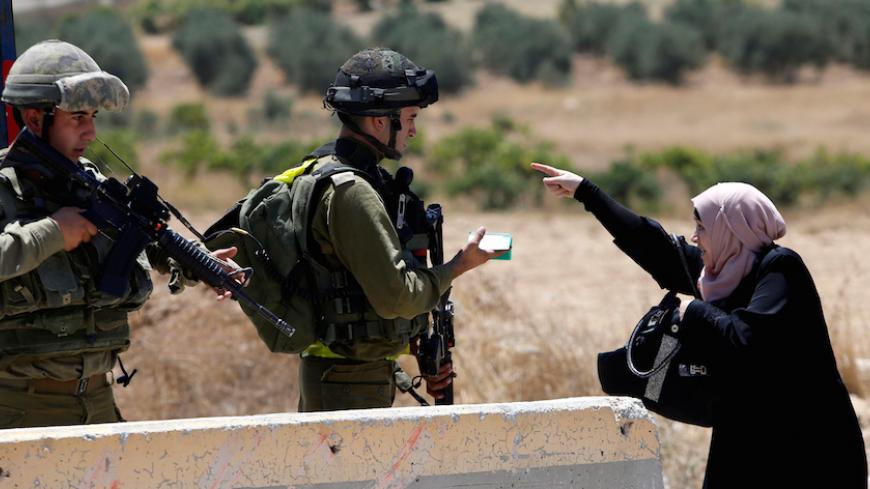 A Palestinian woman argues with Israeli army soldiers as she is searched at a checkpoint during clashes in the West Bank Fawwar refugee camp, south of Hebron, Aug. 16, 2016. - REUTERS/Mussa Qawasma

Israeli Defense Minister Avigdor Liberman's plan for Palestinian towns and villages in the West Bank is already being implemented, even before its official launch.

On Aug. 17, Liberman presented a plan to deal with Palestinian terrorism by dividing Palestinian towns and villages into “green” ones whose residents have abstained from terror activity and “red” for those whose residents have engaged in attacks against Israelis. Israel would deal with the “red” ones with an iron fist, whereas the “green” ones would enjoy economic benefits and goodwill gestures.

In recent weeks, according to Palestinians who spoke to Al-Monitor, even before the plan’s official publication, Israel’s military activity in the West Bank has undergone a significant overhaul. Israeli troops conduct almost nightly operations in the refugee camps and in villages and towns whose residents have allegedly attacked Israeli targets. One of the main targets of this activity, according to the Palestinians, is the Dheisheh refugee camp south of Bethlehem. In addition, Israel Defense Forces (IDF) units conduct operations almost every night in Palestinian villages in the Hebron district.

Most of the military activity takes place in the part of the West Bank designated in the Oslo Accord as Area A, which is under the full civilian and military control of the Palestinian Authority (PA). The IDF generally avoids entering the area, other than in emergencies. The reported nightly military activities reflect the new policy adopted by Israeli security forces — a policy that is the exact opposite of the strategy implemented in the past by former Defense Minister Moshe Ya'alon and Chief of Staff Lt. Gen. Gadi Eizenkot, who believed that any friction with the Palestinian population could increase the motivation of young people to carry out attacks and escalate tensions.

Damiri also said that given the tensions resulting from the intensive IDF activity, any wrong step, however small, could ignite a spark that could result in loss of control and chaos.

Majid Faraj, the PA’s intelligence chief and a resident of the Dheisheh refugee camp, claimed in January that Palestinian security agencies had foiled some 200 attacks against Israelis since the current wave of terrorism began in October last year. The remarks by Faraj, whose father was shot dead by Israeli troops during the second intifada, drew harsh criticism on the Palestinian street and even threats to place him on a “blacklist” compiled by a group calling itself “the coalition of the young” that organizes demonstrations against the PA. Now he faces a dilemma: IDF units are carrying out extensive activities in the refugee camp where his family lives, clashing with local residents, and he is supposed to instruct his forces to detain Palestinians suspected of planning attacks against Israel.

One of the best-known activists in Dheisheh told Al-Monitor on condition of anonymity that in the past Israeli troops would operate in the camp once every two weeks or even once a month, whereas now it has become a nightly routine. He said, “Every night we hear shooting, and I run to my daughters’ rooms to reassure them. Life here has become intolerable. We hear explosions at night and in the morning we get updates on the number of wounded and their condition.” The situation has become explosive, young Palestinians are being shot and left disabled and the motivation to retaliate is growing, he added.

Young residents of the camp recently claimed that an Israeli commander who is actually a Shin Bet operative told them that they would soon be invalids. These remarks, quoted by Palestinian media outlets, caused a storm, but were denied outright by the Israeli military spokesman.

“We call the Israeli commander in charge of the Dheisheh area ‘Nidal,’ that’s the name we’ve given him,” said the activist. “Now we have placed large signs at the entrance to the camp warning that we will not be silent in the face of additional harm to our young people. Signs reading ‘Nidal, beware, don’t enter the camp’ have been distributed throughout the Dheisheh refugee camp.”

Asked whether he had personally heard the Israeli commander’s alleged comments, he told Al-Monitor he had not, but added, “Facts on the ground speak for themselves.” Just in the past month, he said, dozens of young Palestinians have been injured by Israeli troops who broke into homes and fired indiscriminately.

The Palestinian information center Badil issued a report Aug. 23 detailing the number of Palestinians injured in the nightly IDF raids in the past month, and included photos of dozens of young people it said were wounded by IDF gunfire directed at their legs. According to the data collected by the center, 18 Dheisheh residents aged 17 to 27 were hurt, and Israeli military activity was also conducted in the nearby villages of Doha and al-Fawar in the Hebron district.

The report was issued before an Aug. 26 raid in Dheisheh, in the course of which two additional young Palestinians were injured. “Let’s be clear,” the activist told Al-Monitor, “in the past, the Palestinian security agencies operated here quietly and sensibly. Now Liberman comes in, pours a barrel of oil on the ground and is about to set the area on fire. Be careful.”