Will the Palestinian Authority succeed in pursuing activists beyond its borders? 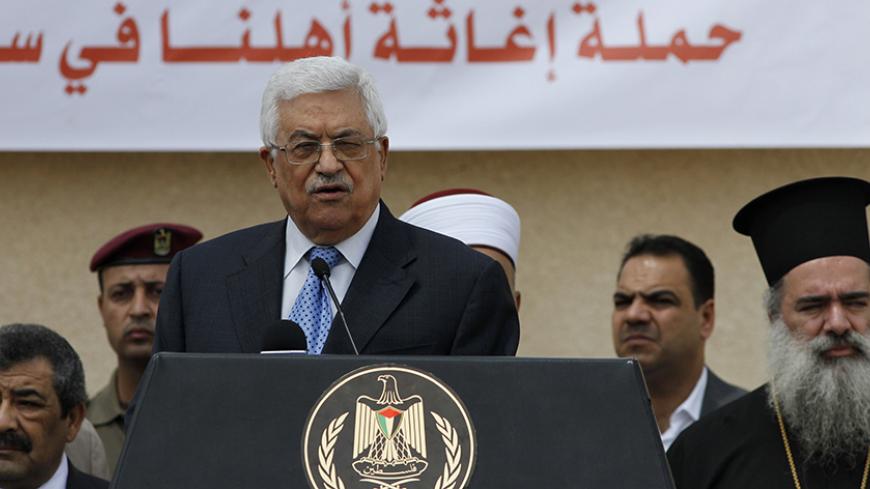 The Palestinian Authority (PA) continues to pursue journalists and media activists — even those outside Palestine — for criticizing it in their social network posts, and some activists accuse the authority of resorting to violence.

On Oct. 22, unidentified gunmen opened fire on the family home of Fahid Elsalameen in the town of Samu in the southern West Bank. The house was damaged but no one was injured. Elsalameen, one of Abbas’ most prominent opponents residing in the United States, accuses the PA of being behind the attack and said he expects another such shooting as he continues to criticize the PA and accuse it of corruption.

“The Facebook activists pursued by the PA are among the finest young Palestinian men," he told Al-Monitor. "They are intelligent, courageous, devoted to our homeland and well-aware of how the PA’s corruption is prevailing. They will not put up with the PA’s [actions], and they believe [the campaign of PA President Mahmoud] Abbas against us is shameful for him but a source of pride for us. He will never stop us.”

Rai Alyoum newspaper reported Oct. 14 that the Palestinian Foreign Ministry had sent a letter to US Secretary of State John Kerry accusing Elsalameen of supporting terrorism and inciting against peace. In the letter, the ministry asked the United States to prevent Elsalameen from writing anti-PA posts on his Facebook page.

Earlier in the month, an anonymous source in the Foreign Ministry told Ni News that Abbas had asked Interior Minister Riyad al-Malki to prepare an urgent case against Palestinian activists in Europe, the United States and Arab countries who attack the PA online.

On Oct. 14, P.N.News published an audio recording of a high-ranking but unidentified Palestinian officer revealing the names of more than a dozen activists targeted by the PA. Elsalameen was among those on the list.

“Journalists are extremely worried about the PA crackdown on them," Imad Efranji, head of the Forum of Palestinian Journalists, told Al-Monitor. "We condemn this campaign that violates media freedoms, and those committing such violations should be held accountable. Although the Palestinian government and the minister of interior are the ones responsible for violations against journalists, this phenomenon must be addressed.”

On Oct. 17, the General Intelligence in Hebron arrested journalist Mohammed Abu Jehah, and the Preventive Security Force (PSF) extended the detention of journalist Nidal al-Natsheh, who is charged with insulting the PA and Abbas. On the same day in Qalqilya, the PSF summoned journalist Qais Abu Samra for questioning, while the Magistrate Court in Nablus held a trial for journalist Tariq Abu Zeid on charges of undermining the PA’s reputation.

Abdul Rahman Thaher, a Palestinian film director residing in Jordan who was included on the list of targeted activists, told Al-Monitor of his experience.

“I have recently received threats from the Palestinian security forces for criticizing the PA," he said. "Abbas requested that my activities be monitored and accused me of transferring money to support his opponents in the West Bank, as well as working for the Jordanian intelligence services. The fact that my name is on that list means the PA could arrest me if I visit Palestine. The Palestinian security services are threatening me over the phone and by email, but they will not stop me from writing.”

The Karama Press website on Oct. 9 quoted an official at the Palestinian Foreign Ministry, on condition of anonymity, as saying that the office of Palestinian intelligence chief Maj. Gen. Majid Faraj had sent Malki details on activists living abroad for the Foreign Ministry to submit complaints to the host countries. Faraj called on these countries to help prevent the activists from posting statements against the Palestinian leadership, Karama reported.

The next day, however, Malki denied ever making a formal decision to pursue activists within diplomatic frameworks, noting that such claims aim to tarnish Abbas' image.

He is not alone in raising the question of a conspiracy against Abbas.

A Palestinian security official told Al-Monitor on condition of anonymity that there is “a Palestinian campaign, launched inside and outside of Palestine, to undermine President Abbas and the PA."

"There are some individuals in the West Bank cooperating with those responsible for planning such a campaign, and they are providing them with reports, pictures and videos to post on social networks," the source alleged.

Muath Hamed, a Palestinian journalist residing in Turkey, also told Al-Monitor, “I have doubts about how responsible the PA is for that list. It could be the product of Abbas’ opponents, such as Mohammed Dahlan, who might have chosen the names of activists and journalists known for publishing posts against the PA and Abbas.”

Yet, the PA's record of vexing the press is long.

Hanin Warda Alabed, a Palestinian journalist residing in Turkey whose name was also included in the list of targeted activists, told Al-Monitor, “The PA has precedents with this policy of gagging and suppressing the freedom of expression by accusing journalists of insulting high-level figures — in reference to President Abbas. The PA is always threatening journalists inside Palestine; whoever criticizes the PA gets pursued.”

Earlier this month, Firas Press said Abbas called on Israel to help him shut down anti-PA online pages, since Israel has already asked Facebook’s administration to take down pages that allegedly incite violence.

Ammar Dweik, director general of the Independent Commission for Human Rights in Palestine, told Al-Monitor, “The Palestinian security services are pursuing certain individuals because of their Facebook posts, while turning a blind eye to posts published by others." Dweik said the list might wrongly identify some people as oppositionists while leaving others off, but in the end, "Western host countries will not arrest and hand over those living abroad to the PA because of their online posts. These are not cybercrimes that call for extradition or trial.”

Nashaat al-Aqtash, a journalism professor at Birzeit University, also told Al-Monitor activists in Europe should not be overly concerned.

“Facebook posts trouble the PA because it only wants the media to praise it but never to reveal its flaws. However, I do not believe European countries would arrest Palestinian activists and hand them over to the PA. This requires long judicial proceedings, and in the end they will not be extradited," Aqtash said.

It seems the PA won't stop pursuing its opponents anytime soon. This is especially true in light of the deep polarization within the Palestinian leadership as talks about Abbas’ successor intensify. However, the activists say they don't plan to stop, either. They continue to talk about the corruption plaguing the PA, especially those who reside outside the West Bank, beyond the reach of the PA’s security services.

Taja al-Hajj, a Palestinian activist residing in Lebanon whose name is also on the list, told Al-Monitor, “The published list will not prevent us from expressing our opinions on Facebook. Even if the PA succeeds in shutting down our pages, we have other means to convey our voice.”

Ali Qaraqe, a Palestinian blogger in Turkey who also was listed, told Al-Monitor, “The list is indeed accurate. The Palestinian Embassy in Ankara has been monitoring my movements as an opponent of the PA. Although the PA’s security is unable to pursue us in Turkey, publishing our names on security lists ... concerns us. However, all of this will not stop us from continuing to write.”