Father of Tel Aviv attacker: If I had the chance, I'd ask Khaled why he did it

The father of Tel Aviv attacker Khaled Mahmara told Al-Monitor he did not know about the intentions of his son. 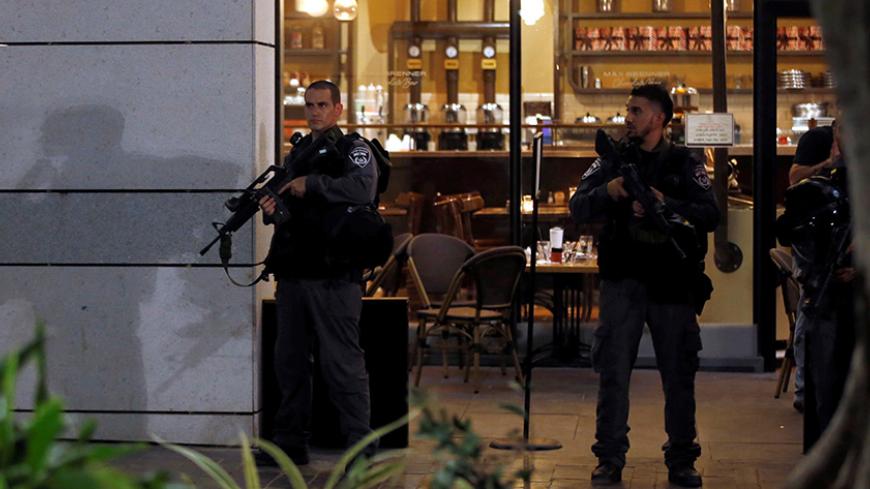 Israeli policemen secure the entrance to a restaurant following a shooting in the center of Tel Aviv, June 8, 2016. - REUTERS/Baz Ratner

The father of Khaled Mahamra, one of the two terrorists responsible for the shooting attack June 8 in Tel Aviv, can’t understand how his son was able to hide his plans. Khaled was a student at the Faculty of Engineering at Mutah University in Jordan. He was supposed to return there this summer to complete his studies. He was the eldest child, and his family had pinned high hopes on him. They had expected him to help support the family once he obtained his coveted degree. But instead of providing them with financial assistance, Khaled Mahamra, once the pride of his family, could be the reason why their home in Yatta will be demolished.

In an interview with Al-Monitor the day after the attack, Khaled's father, Ahmad, said that Israel Defense Forces (IDF) forces had not yet been to his home (at the time of this interview, the IDF had already raided the home of the other terrorist, Mohammad Mahamra). They were, however, surrounding the village and not letting anyone out. “If I had the chance to sit with Khaled now, I’d ask him why he did it. Why did he kill human beings?” his father wondered.

Two of the terrorists’ uncles are senior members of Fatah’s military wing. One of them was even released from Israeli prison in the 2011 Gilad Shalit prisoner exchange. Still, according to Ahmad Mahamra, the attack his son committed together with Mohammad struck the family like lightning on a clear day. “We had no idea. The only thing I can think about is that everyone is a victim: him [Khaled] and the Israelis. Even though he was studying engineering, both he and the youngsters of his generation thought that there was no hope, that there was no future,” said Ahmad.

Musa Mahamra, head of the Yatta village council, is also a member of the extended family. He told Al-Monitor that while there have been attempts to connect the family to past attacks against Israelis, “I can say with confidence that these two young men had no security record, nor did they have any political allegiance. What motivated them to launch their attack was the feeling that every opportunity had been closed to them and that there was no way out. This is a feeling shared by all young people of the same age who participated in terrorist attacks in the past.”

Al-Monitor asked Mahamra how he explained the attack in Tel Aviv after so many long weeks of calm and the assessment that this intifada had been stopped. He responded that as far young Palestinians were concerned, Avigdor Liberman’s appointment as Israel’s defense minister was “a brusque statement indicating Israel’s intention to worsen the situation and exacerbate the sense of helplessness.”

Mahamra said that after things calmed down and the attacks stopped, “young people discovered that nothing had changed. There were no political, social or economic achievements from what happened, at least as far as they were concerned. There was nothing. Liberman's appointment equaled — from their point of view — a declaration by Israel in favor of escalating the situation. We’ve all heard the statements that came out of Israel [before Liberman’s appointment]. I am sorry about the attack and the killing of innocents, but the younger generations, ages 16-20, which committed the attacks in the last wave of violence, acted out of desperation. That is what motivated the two members of the Mahamra family to act. The Hebron sector sacrificed half of the martyrs in the last outbreak of violence. There is an explanation for that. It didn’t just happen. Young people from Hebron run up against countless [IDF] checkpoints, attacks from settlers and clashes with the army. This is their way of rebelling against that.”

Will the shooting attack in Tel Aviv set the region on fire again? Will other attackers from the territories follow in the footsteps of the Mahamra cousins and launch attacks against Israelis? It is worth remembering that the shooting incident that left the Henkin couple dead in October 2015 was the first in the current series of terror attacks. There were dozens of stabbing and shooting attacks after it.

True, Palestinian and Israeli officials conducted a situation assessment over the past few weeks expressing satisfaction with the way the “outbreak” had been contained and claiming that it was the result of security collaboration and the more moderate steps taken by Israel in its war against terrorism. But then came the attack in Tel Aviv.

One indication of the tension that continues unabated in the territories and the possibility that the wave of violence could start up again is the expression of joy among young Palestinians, who were documented celebrating news of the attack. This is a familiar phenomenon from the past. The greater the sense of distress in the territories and the deeper the desire to take revenge on Israelis, the more jubilant the celebrations are after every attack in Israel.

“They’re just gangs of young people. They don’t indicate anything,” said Musa Mahamra. Nevertheless, he said that he cannot discount the possibility that the miserable situation in the territories could explain the exuberant celebrations in Hebron, Nablus, Tulkarm and the Gaza Strip. He is concerned that other desperate young people might try to imitate the two assailants from Yatta.

Until now, the IDF has advocated for a policy of restraint. Now it is facing a difficult dilemma. Policies such as the easing of restrictions, granting work permits to tens of thousands of Palestinian laborers and removing checkpoints may have succeeded in keeping most West Bank Palestinians away from the circle of violence, but it also made it easy for people like the Mahamra cousins to infiltrate Israel. Over the next few days, Liberman will be forced to decide what Israel’s policy will be from now on.